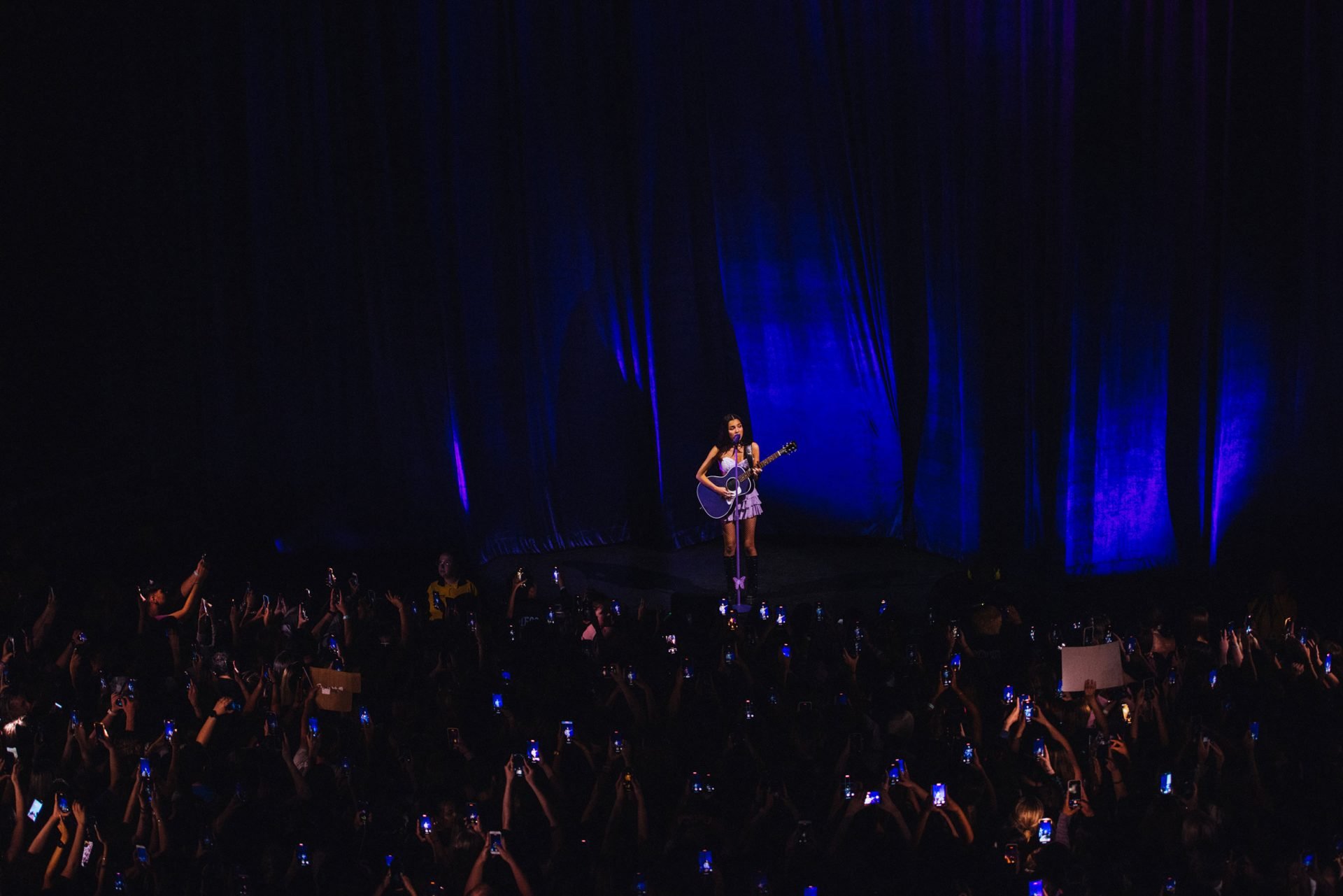 Waiting behind a purple curtain projected with the words “SOUR TOUR” is the biggest breakout pop star of the last year. She’s 20 minutes late, but what’s another 20 minutes? Most of these fans have been here for hours (some, days) already.

It’s the penultimate night of her ‘SOUR’ tour, and Olivia Rodrigo is bringing her enormous debut to life for the first of two nights at London’s Eventim Apollo. Quite unbelievably, it’s only been a little over a year since the release of her Grammy-and-all-the-rest-winning record, yet it feels like Olivia is selling herself short at this venue. On its announce, she mentioned she didn’t feel like she should skip steps in the ‘new artist’ process, but it’s rare that an artist blows up as big and as quickly as our Liv.

This is far from an intimate show, though. The Apollo is packed, barely a spare seat in sight, and there’s certainly no breathing room on the floor. Even better, every person here knows every word, almost entirely overpowering Olivia when she kicks off with ‘brutal’.

Some people are born to perform, and Olivia must be one of them. Releasing this record in lockdown meant she’s cultivated an impeccable stage presence in secret. An immediate sell-out tour was always on the cards after the roaring success of ‘SOUR’, and Miss Rodrigo rises to the challenge and goes for the gold. Obviously, she takes it.

After blasting through a souped-up version of ‘jealousy, jealousy’, she knocks ‘driver’s license’ out early on. Where other pop stars would’ve reserved their first number one hit for later on, Olivia puts in between a late album track and a cover of Avril Lavigne’s ‘Complicated’. It’s icon behaviour.

Certain lyrics just hit different live. The “RED LIGHTS! STOP SIGNS!” belting bridge of ‘driver’s license’ is a top-of-your-lungs emotional release, as is the “you betraaaayyyyyed meeeee” chorus of ‘traitor’. She often lets the crowd finish off her lines, and they do it with as much ease on the deeper cuts like ‘favourite crime’ as on monster hit ‘good 4 u’.

Speaking of, what a fucking ending. ‘SOUR’ live brings the same turbulence of the album to the stage – through the angsty generational frustration of ‘brutal’, to the cinematic and devastating ’happier’, to the solemn solo performance of ‘enough for you’ – climaxing at the catharsis of her biggest banger.

When ‘SOUR’ was released, Olivia Rodrigo felt like an amalgamation of the honest, emotionally driven teen stars who came before her. Avril Lavigne, Alanis Morissette, Taylor Swift, Hayley Williams – the latter two’s influence being so strong they gained credits on the record, the former both joining her on earlier stops of this tour, proving that it’s more than just inspiration for Olivia – it’s a passing of the baton from one generation to the next.

Those influences are all there during her live show. Every time she sits down at the piano to do a heartbreak ballad, she recalls Taylor’s head-banging piano performances of ‘All Too Well’. She’s had lessons in keeping her voice stable enough to belt high notes while bouncing across the stage from Hayley. She borrows ‘Complicated’ from Avril and it slides between ‘SOUR’ tracks seamlessly.

Adding to the tradition of bringing out a guest for a karaoke rendition of one of her favourite songs, Olivia (pretty unexpectedly) introduces Natalie Imbruglia to the stage to perform ‘Torn’. It’s probably a lot of this crowd’s actual introduction to Natalie Imbruglia.

That isn’t to drag the ages of the people here tonight. Teenage girls are often the driving force behind pop music, and Olivia and her stans are no exception. Olivia stands proud as a fangirl herself (she uses ‘Olivia’ by One Direction as her walk on song). On the other hand, when she returns to her dressing room, she’ll share posts of tonight’s show from her Livies on Instagram.

The beauty is that in moments like these, when Liv sings about passing her driving test, or comparing herself to other girls on social media, or an earth-shattering first heartbreak, it doesn’t matter that she’s an ex-Disney star with a record-breaking album; the feelings are universal.