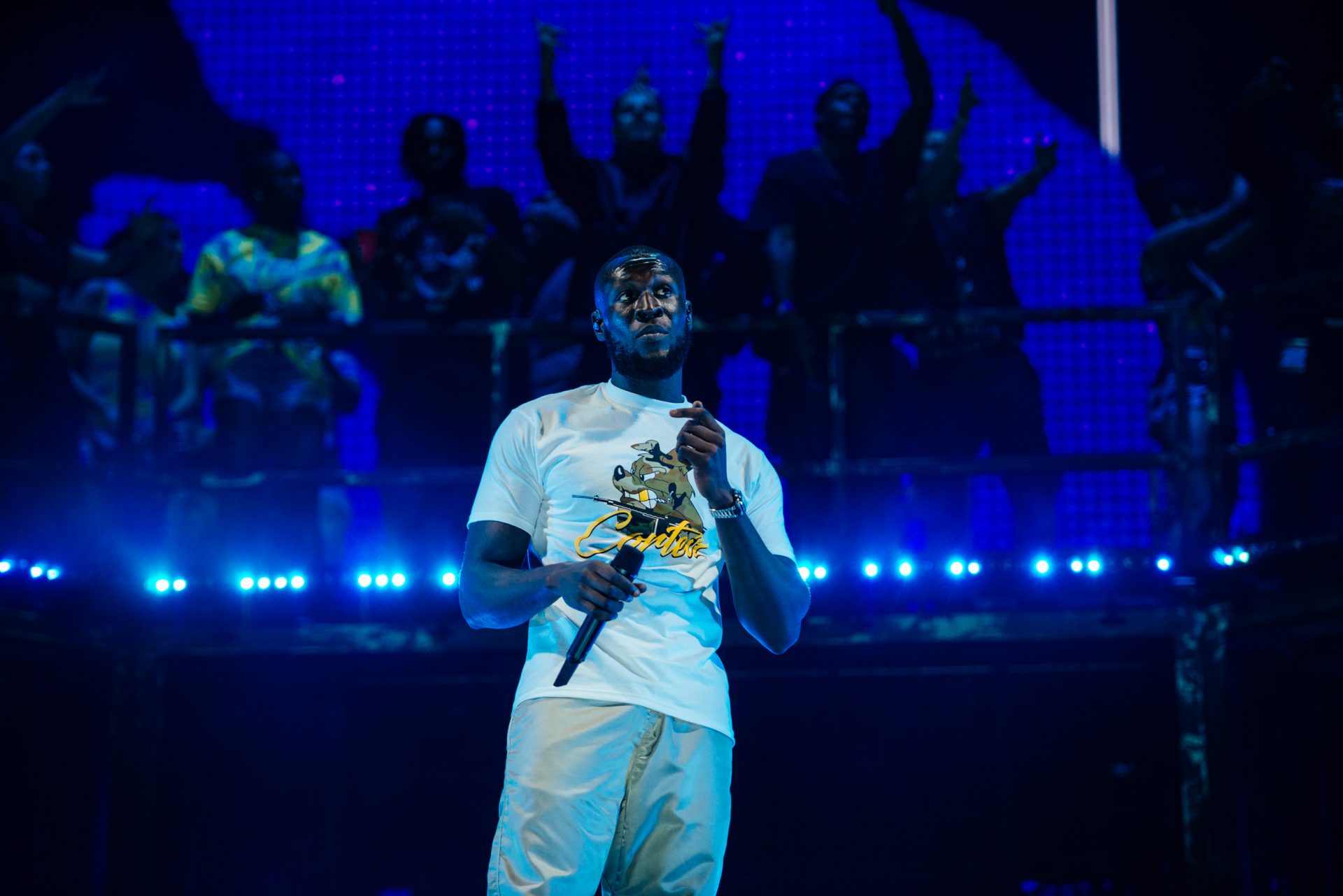 Stormzy, Ashnikko, Declan McKenna and more provide a first day to bring Reading Festival back with a bang

There have been times over the last year when we’ve wondered if Reading 2021 would even happen. As new variants threatened the coronavirus pandemic would deny us a second straight festival season, the August Bank Holiday bash and its optimistically international line-up never wavered in its confidence. Still, from outside, it occasionally seemed it would take a miracle to pull off.

Turns out miracles do happen. Though the line-up has shifted considerably in recent weeks – some chiefly US acts forced to pull out, replaced mainly by domestic talent – this is very much Reading Festival as we know it. To many, the gateway for years to come spent stood in fields, watching bands. For others, an annual event always ringed on the calendar. For bands, a vital and essential part of their journey. Turns out we missed it more than we thought. Who knew?

Dublin’s finest indie-rockers Inhaler make a triumphant return to the festival circuit to show off their chart-topping album on Reading’s Main Stage East, proving the 4 Irish lads possess more than enough live presence for one of the biggest crowds of this summer so far.

Starting with title track ‘It Won’t Always Be Like This’, the set unfolds magnificently as outstanding vocals, throbbing bass and addictive riffs come effortlessly. ‘Totally’ in particular brings forth some serious and understated groove; Rob Keating’s elegant harmonic howling from the sidelines almost threatening to steal frontman Eli Hewson’s limelight. Inhaler continue to cement their charm – a band somehow more than the sum of their already very special parts.

How do you celebrate graduating to the Reading Main Stage? If you’re Sports Team, you hire a blimp, write a mobile number on the side of it which doesn’t actually work, then stick it in front of one of the main screens. It’s definitely ‘a look’, especially when combined with Alex Rice’s clip-on bowtie and dungarees.

Walking on to ‘Rock ‘n’ Roll Star’, the band don’t waste time, slamming straight into opener ‘Fishing’ – only trouble is, the guitars are completely inaudible. After a few minutes of giving Oli Dewdney’s bass some time to shine, the sound is finally sorted and the party can begin in earnest. The crowd alternate between mosh pits, crowd surfers and sitting on the ground pretending to row a big boat (because of course).

Throughout the set it’s clear that Sports Team have absolutely earned their spot, with the contrast in crowd size and energy compared to 2019’s set on the Festival Republic stage a sight to behold. Ben Mack’s hair has also had an upgrade, half dyed blonde, half black, with an orange stripe down the middle.

New track ‘God’s Own Country’ leads into early hit ‘Margate’, with Alex pulling out a harmonica for the latter and somehow avoiding alienating half of the crowd in the process. By the time ‘The Races’ rolls around he’s going one better, crawling around on the stage as if he’s at an ill-fated fashion shoot, pulling down a strap of his dungarees to reveal a nipple, despite the pre-watershed timeslot.

“I’m going to try something different and play guitar,” he says between tracks, taking Rob’s guitar and immediately being told it’s out of tune. That’s that plan scrapped then. Instead the double whammy of ‘Kutcher’ and ‘Stanton’ follow, with Rice climbing amp stacks, spinning the mic stand and leaping into the crowd. As he’s buoyed back to the front on a sea of hands wearing an Elmo bucket hat someone has given him, the set comes to a close.

Alex often claims that Sports Team are ‘the best live band in the world’. Much as we hate to see him proved right, today’s set was pretty bloody special.

Are you ‘Ready For More’? Indie lives, baby. Galloping onto the Main Stage West, the sonic Sea Girls prove that much.

Dressed in white, singer Henry Camamile looks like the symbol for new life after a long, long drought. And isn’t it great to be back? Bringing new track ‘Sick’ out for a festival run-around, the band give us a tasty preview of their upcoming album, alongside old favourites like ‘Violet’, ‘Do You Wanna Know’ and ‘Closer’

Over the last couple of years, Sea Girls have blossomed into fully-fledged indie stars. ‘Open Up Your Head’ brings things up a notch, and shows Reading what this band are made of.

Ground control to Declan McKenna. Lovely, glittering Deccers brings a bit of spacey sparkle to the Main Stage East, opening his set with ‘Beautiful Faces’ and a synthy, fizzing rendition of ‘Isombard’ which gets hands in the air from the off. His set feels like a play, a kind of cosmic fantasy that even a stumble offstage during ‘Why Do You Feel So Down’, briefly knocking the microphone out of service, can’t disrupt. When Declan finds his feet the crowd bounce, and he bounces along with them, stage lights sparkling off the sequins in his suit.

It’s risky business bringing a track you have to sit down to perform out at Reading, but when Dec swaps his gold guitar for a keyboard for ‘Be An Astronaut’, he more than pulls it off. The track surges along, turning into a 70s glam production. It’s a massive tune that others would no doubt consider the standout of their set, but when he swaps back to the guitar, Declan knows what the people have come for.

‘Here’s your prize,’ he grins, launching into ‘Brazil’ to screams from the crowd. A certified star? You better believe.

Over on Main Stage West, Sam Fender’s socio-political thrashers never fail to summon up raucous energy in his ever-growing cult of dedicated fans. At Reading, they’re ready to match his demands of a moshpit for the ages.

The set travels through early hit ‘Play God’ all the way to the Springsteen-inspired’ The Borders’. Newer material brings on jazz elements for a sprawling set, with saxophonist Johnny Blue Hat flexing some killer solos. The whole band revel in their act and have their core audience lapping up every minute.

After 15 years in the game, Ghetts has a hell of a back catalogue to call on. Despite that, his Reading set leans heavily on new album ‘Conflict of Interest’, accompanied by a live bassist, drummer and keyboard player. On the other hand, why lean on the classics when you’ve got a brand new album full of bangers?

‘Skengman’ is received with precisely the kind of excitement you’d expect, Ghetts bouncing around in all black save a white fisherman’s hat, which he loses just in time for an aggressive rendition of one of the verses. Pacing the front row of the crowd, he reminds everyone there just why he’s stayed the course in the UK music scene – even if the crowd is depleted by a less than ideal clash with certain other UK superstar…

Even though AJ Tracey stood us up at Reading in 2019 (long story – Ed), we don’t hold grudges at Dork. We don’t. We’re all about love and light here, and we like to have a good time. So despite old wounds, we head over to his Main Stage East set with open hearts.

It must be difficult to judge how to make your return to the same festival you played pre-pandemic after the world has changed so dramatically, but AJ pulls it off with a mixture of new tracks like ‘Little More Love’ off new album ‘Flu Game‘, and old classics like ‘Pasta’. With backing dancers dressed like cheerleaders onstage the energy is high, and ramps up even further when Aitch appears, fresh from their appearance earlier in the day, to perform smash hit ‘Rain’. It’s a strong return, especially considering how long we’ve all been away. All is forgiven, AJ.

Over in the Lock Up, the chanting starts up a full ten minutes before the set. By the time Ashnikko bounds onstage for their first Reading appearance, the energy is at fever pitch; the air filled with the sound of Gen Z screaming. The kids are obsessed.

And rightly so. From the opening bars of ‘Tantrum’, it’s clear that this set is going to be a standout. Flanked by a pair of bright pink ‘pussy bears’ (more or less exactly what they sound, one giant clitoral eye perched above a two-foot pink and purple vulva adorning the body of a bear) Ashnikko smashes out the hits. From ‘Stupid’ to ‘Deal With It’, they even ensure an excitable response to a new song by instructing the crowd to ‘act like you know all the words’.

Speaking on the state of bad actors in the music industry, on their attempts to reduce women and minimise people, Ashnikko has a clear message; “I refuse to make myself small for this industry”. No risk of that here. As ultra-banger ‘Daisy’ closes things out, it’s crystal clear that Ashnikko is very fucking big indeed.

When Stormzy headlined Glastonbury in 2019, it felt like a gamble. It’s a testament to the success of that set – as well as second album ‘Heavy is the Head’ – that tonight’s Reading headline slot felt like a natural announcement rather than a reach.

In his first gig back since lockdown, the crown prince of grime arrives on to a screaming electric guitar solo, pyrotechnics and fireworks, before blasting through opener’ Big Michael’ with a release that feels like eighteen months of pent-up energy all at once. The word ‘Shoobz’ flashes across the screens which flank the stage and dozens of people pour from the side onto an elevated platform, bringing the crowd’s energy onto the stage. It’s an old school atmosphere that blends the swagger of a huge headline set and the chaotic nature of an underground grime rave.

Nods to the genre’s early days are laced throughout, with ‘Mr Skeng’ performed to the instrumental from Dr Dre’s ‘Forgot About Dre’. It’s this chopping and changing that lends grime freestyles their energy, and it’s a perfect reminder that even though Stormzy hit it big with gospel-laced tracks which mums can enjoy, his feet are still firmly planted in the genre which moulded him.

The energy is ratcheted up even further as Tion Wayne bounces onto stage to perform ‘I Dunno’, launching straight through to megahit ‘Body’, joined by Russ Millions, fresh from a set at Leeds earlier in the day.

‘Crown’ signals a dip in the party atmosphere as Stormzy dips into the slower side of his back catalogue, including a rendition of ‘Own It’, the crowd enthusiastically filling in for Ed Sheeran on the hook.

After that, it’s back to the bangers as Dave comes out for ‘Clash’, thousands of fans going absolutely ballistic the second his face appears on the big screen. A final one-two punch of ‘Shut Up’ and ‘Vossie Bop’ signals the end of the set, Stormzy grinning from ear to ear as he looks out at the results of yet another massive headline show.