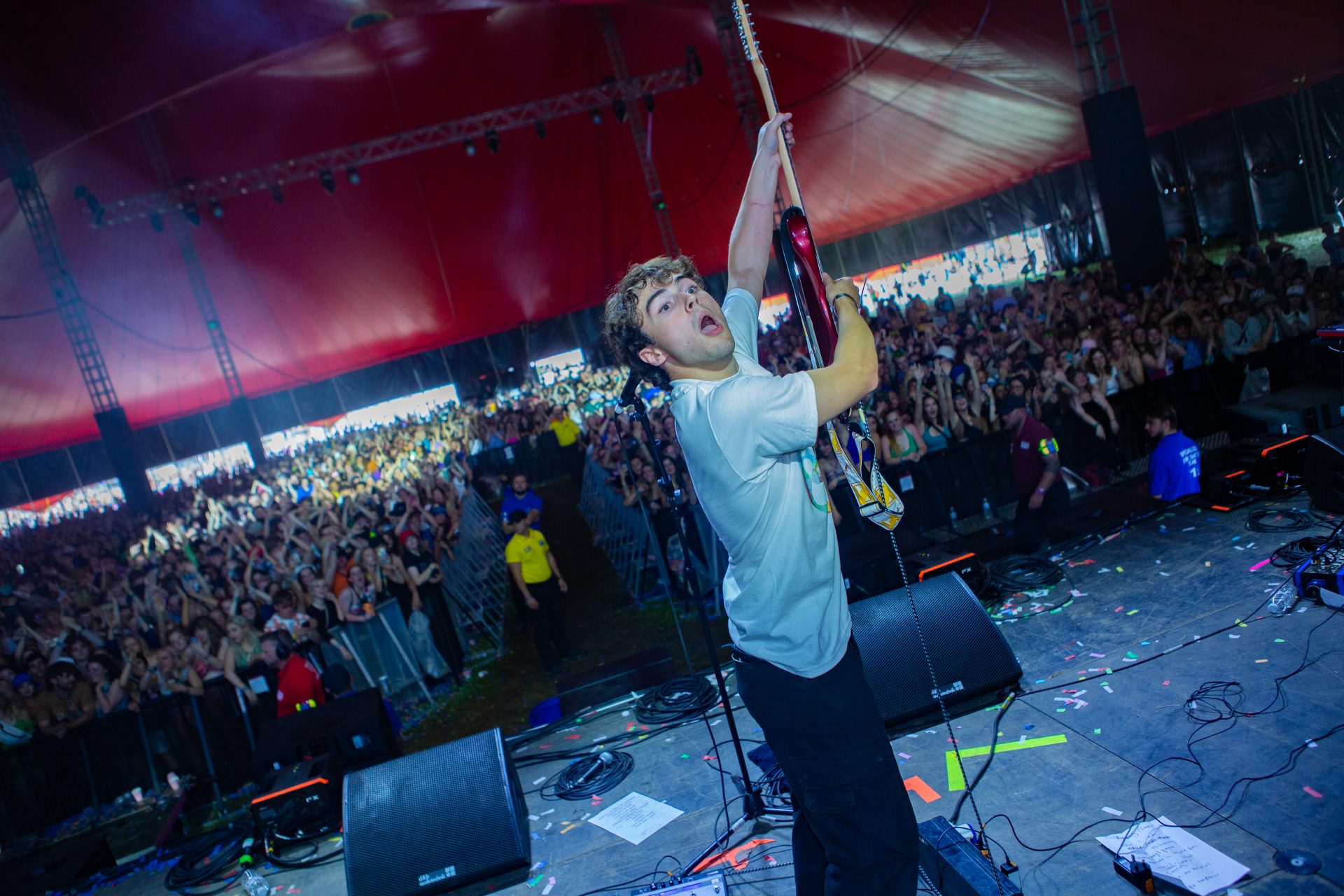 Rock’n’roll ravers NOISY feel well placed on a Dance stage that’s trying its hand at a wider brief for the start of Reading’s second day; their thunderous bass achieving its intended dominance in a celebratory midday set. A sunny day down south may not seem like the trio’s usual set-up, but they succeed in bringing their love of British club culture into a world of indie-rock influences.

Frontman Cody Matthews encourages the crowd to “dance like nothing matters, because this moment matters”; with mosh pits before the first song has ended and crowd surfers in the air throughout the second, his words ring true.

An act that inspires intrigue with an aura of mystery, Police Car Collective play just their second ever show on the BBC Introducing Stage. Indie-pop-rock bathed in nostalgia and forced through a retro filter cultivates a growing audience, with tracks like ‘MINE’ granting a bright, euphoric release to those present..

The Liverpool-based duo operate in complete synergy – bassist Simon churning out smooth and suave bass lines while frontman Frankie embraces the chaos, throwing his body across the stage like a ragdoll.

An explosive ending comes with the impassioned shredding of ‘ALLTHETIME’, an energised finale to an eccentric set.

It’ll come as news to absolutely nobody that pop-punk has made a comeback in recent months. Still, thanks to travel restrictions, it’s left to KennyHoopla to represent the whole goddamn scene at Reading Festival this year.

Not that he seems to mind. Fresh from a run of shows with Yungblud and with perhaps the most intense headline show in London this side of lockdown in his back pocket, he takes to the Dance Stage today with a certain swagger. The crowd is just as hyped. In the toilets before his set, a group of lads can be heard singing the refrain from ‘How Will I Rest In Peace If I’m Buried By A Highway’, and the cheers when he takes to the stage are the sort usually reserved for headliners.

It has all the foundations of a brilliant set but true to form, KennyHoopla over-delivers. This is the making of an icon.

It takes KennyHoopla roughly 2 minutes before he dives off the stage and into the crowd. He spends the entirety of the set ping-ponging between the two, perhaps trying to fit the experience of both punter and performer into his first trip to Reading Festival. He crowd surfs, he moshes, he breaks a microphone. It’s all gloriously chaotic.

While his music pulls heavily from the early 00’s scenes, that thrived back then on the Main Stage here, KennyHoopla is more than a genre revivalist. Sure, ‘Hollywood Sucks’ is heavily influenced by the pop-punk thrash of Blink 182, ‘Inside Of Heaven’s Mouth, There Is a Sweet Tooth’ has bursts of post-hardcore fury and ‘9-5 (Love Me)’ is very Taking Back Sunday but it’s smarter than simple cover versions. Twisting the old with a Gen-Z disregard for history, his music is very much the future.

The whole thing is delivered with the sort of melodramatic sincerity that made superstars of Fall Out Boy, Panic! At The Disco and My Chemical Romance (give it time, there’s every chance KennyHoopla will reach the same heights), but there’s power to be found in that shameless vulnerability. “I just died at the thought of being alive at the same time as you,” he sings in ‘Estella’, a stomping punk number that starts with a backflip and only gets more theatrical. There aren’t many people who can’t relate to such overwhelming emotion, which is perhaps why his crowd is so passionate.

From the moment he comes on stage, the entire tent becomes a swirling pit. The curious and the diehard united in excitement.

In a brief moment away from the intensity, Kenny tells the ever-swelling crowd that his walls were covered in posters when he was growing up and he would perform early gigs to them. Today, it’s a dream come true moment. Eager to share this moment, though, he later tells the tent, “you could be here too. All it takes is a lot of purity and embarrassing yourself.”

If Reading Festival 2021 represents the arrival of the next generation of rockstars, it’s Kennyhoopla leading the charge.

Easy Life‘s Murray Matravers makes sure his entrance to Reading Festival doesn’t go unnoticed, marching on stage while screaming raucously and proceeding to launch tinnies at his loyal fans.

A luxurious brass section heightens a collection of indie hits, ranging from old EP material with ‘Pockets’ all the way to tracks from recent debut album Llife’s A Beach’.  ‘Ocean View’ creates a soothing festival vibe before ‘Skeletons’ shatters this illusion with pits summoned at will. Murray’s embracing the insanity too; a quick leap into the crowd and he comes back with no shoes and his joggers down to his ankles. Iconic.

Say what you like about our endless love for Alfie Templeman, but it’s shows like this that are why we fell head over heels in the first place. There’s no room to swing a cucumber in the Dance Tent for this one, Dork’s Favourite Son rolling out his set of bangers for all to feast on. The ‘something special’ he’d started his own rumour about turns out to be a thrash punk version of ‘Smells Like Teen Spirit – a lovely gentle riot. By the end of the set, Alfie’s chucking his guitar in the air, Dork’s photographer is getting lovingly kicked in the face, while his bassist Cameron is in the crowd and everyone’s all giddy. Main Stage next, yeah?

By mid-afternoon, It’s clouded over at Reading, but beabadoobee brings the sunshine with her Main Stage set. After opening with ‘Care’, Bea manages to work a moment of gentle respite with a rendition of ‘Coffee’ led by her acoustic guitar. The calm seems set to continue throughout the first half of ‘Sorry’, before the track takes off with the force of a jumbo jet. What with that, plus the summery, sunshine-y ‘Last Day on Earth’ and its eminently catchy chorus, beabadoobee’s set is a breath of fresh air.

An hour or so later – weather fans – and the sun has come out. Time for pop bangers. Sigrid never lets us down. Right from the off she has the crowd singing along with ‘Don’t Feel Like Crying’, sending a clear signal that now, at least, is a time for joy. Clearly moved by the size and enthusiasm of the crowd (“thank you! I honestly can’t believe it, what the fuck?!” She laughs), she channels pure power for a massive, shining set.

“I’ve been daydreaming about this moment for like two years now,” she says before launching into new single ‘Burning Bridges’. And what a dream it is. The clouds have all but disappeared now, as if the heavens have cleared by pure force of goodwill. The enormous ‘Don’t Kill My Vibe’ reverberates through the festival site, shining a light into every corner. A song that big seems like it has to be the apex, but Sigrid has no shortage of peaks.

After a delighted ‘Sucker Punch’, she brings things down a notch with the moving, hometown ballad ‘Home To You’. The crowd welcomes her with open, waving arms. Never one to rest for too long, though, soon Sigrid turns things back up as high as they’ll go with self-esteem anthem ‘Mirror’. After such a long time away, this return feels nothing less than triumphant.

As soon as Slowthai walks onto the stage, the screams from the crowd are deafening. As the camera pans across the front rows, the varied sights include a man holding out a t-shirt with a cardboard sign saying “Hold my shirt!!!” and a girl holding up a message on her phone which simply reads: “Spit in my mouth”. Luckily neither request seems to be fulfilled during the set, as the latter definitely goes against the strict Covid-19 guidelines in operation at the festival.

The set itself is a blistering run through of Slowthai’s career. Album songs are jettisoned in favour of collaborations including Mura Masa’s ‘Deal Wiv It’ and Gorillaz / Slaves track ‘Momentary Bliss’. The response is huge, and even new track ‘Gynaecologist’  is received like an old favourite.

Unfortunately, the between-track banter casts a shadow, with an aside telling a female audience member to “cheer up and smile”, coupled with the wince-inducing talk about cancel culture preceding ‘Cancelled’ hitting a sour note in an otherwise electrifying set.

The Kid Laroi is a genuine global megastar. Collaborations with Juice Wrld, Justin Bieber and Miley Cyrus accompany platinum album sales and a social media following which would make most headline acts jealous. He comes on stage with huge mirrored sunglasses to match his fame, bouncing across the stage and belting out songs which the whole crowd seems to know every single word to.

It can be tough to work up a crowd in the middle of the afternoon – The Kid Laroi does it so easily it’s like he was born for it. We’d say he’s a future star, but really, he’s already made it.

Why have The Wombats gone the distance where so many others have failed? Because, friends, they have bangers for days. And they are, objectively, fun. They are fun at their own headline gigs, and bloody great fun at a festival when what you need is somebody who will give you an energy boost and not let you down.

Opening with ‘Moving to New York’, the Wombats kick off a set packed with hits from ‘Let’s Dance to Joy Division’ to the more recent ‘Lemon to a Knife Fight’, bringing out their classic wombat backing dancers to frolick across the stage.

It’s the band’s first gig back in two years, but of course you’d never realise. The energy, the polish, has not worn off. ‘Pink Lemonade’ sparkles just as much as it always has, and new single ‘If You Ever Leave I’m Coming With You’ sets the crowd jumping.  It’s good to be back.

Danceable indie icons Two Door Cinema Club, meanwhile, bring an instant sing-along hour to Reading with a curated collection of both hype tunes and chill moments. Having clearly honed their act after a decade in the industry, Two Door utilise sharp riffs and addictive melodies to ensure the crowd is engrained with every lyric. ‘What You Know’ gives the inevitable ending to a scene defining act proving the distinguished kings of indie have still got it.

With the sun having gone down and thousands of over-excited teenagers swarming around the site, it can only be time for one thing; Disclosure on the main stage. Opening with ‘White Noise’, the duo play to a packed-out crowd ready for a dance. Good thing that’s what they’re made for. Peppering classic hits like ‘When A Fire Starts too Burn’ throughout their set, Disclosure fulfil the brief with lasers and smoke machines. Mesmirising, innit?

It may have been two years since the last Reading and Leeds, but did the organisers really expect us to forget Post Malone headlined that one, too? He’s had a haircut and changed his outfit, but we’re still not fooled.

Megahits like ‘Better Now’ and ‘Circles’ swiftly win the crowd over despite the lack of novelty, with seemingly every attendee turning out to see Posty. Before ‘Too Young’ he pauses and says with a laugh “Listen, if I sound like shit you gotta cut me a break”. Judging by the response, the goodwill isn’t likely to run out any time soon.