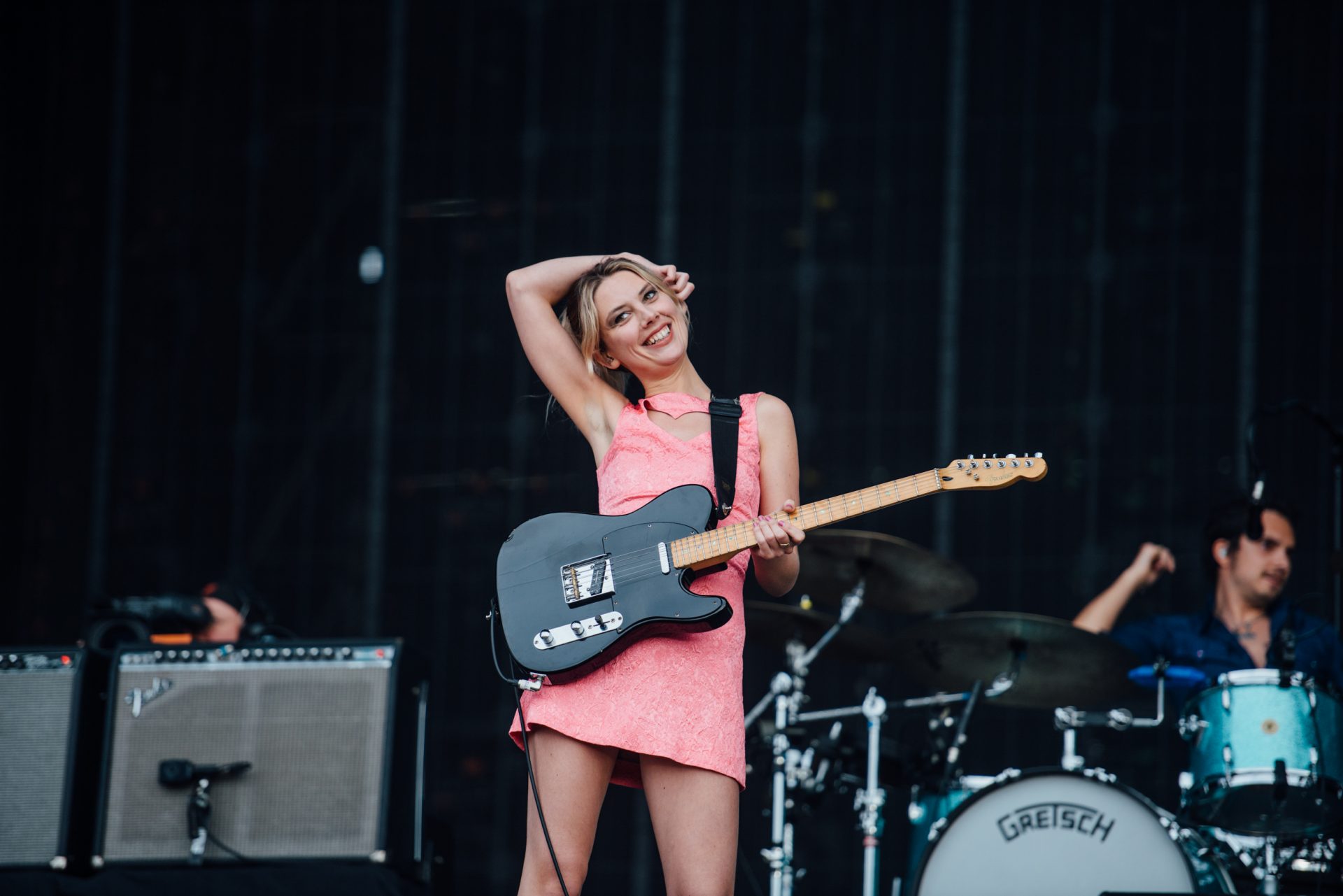 Wolf Alice might well be Britain’s best band right now, but they’re still on the rise on the final day of Reading 2021

Hot Milk have not had much luck with schedules this summer. At Download Pilot they were the second band to play, meaning a fair chunk of their would-be audience were dealing with the traffic surrounding the site. And today, at Reading Festival 2021, they’ve got the graveyard slot.

The first band to open the Main Stage on the Sunday is always going to struggle to drum up much in the way of a crowd or excitement. Dragging yourself to the arena on day three for midday is always going to be an ask. In recent years, the festival has used this slot to give rapidly-rising punk bands a chance on the biggest platform available, and most just about struggle through.

Hot Milk, however, were born for this.

They’ve played a couple of stadium shows with Foo Fighters, which probably helps on days like today, but Hot Milk are a confident bunch. Never ones to stick to expectations, they carry themselves with a strict ‘do-whatever-the-fuck-you-want’ vibe. They made a name for themselves with the syrupy punk of ‘Are You Feeling Alive?’ but today’s set takes in moments of stadium rock, SoundCloud rap and anarchic punk. It’s driven by attitude, but they’re always inviting.

They charge onto the Main Stage West to the post-hardcore infused ‘What Happens When I’m Dead’, complete with Hannah Mee having her Slash moment, before the big sugary pop of ‘Wide Awake’. Elsewhere a new arena-baiting track inspires circle pits, crowd surfers and friends clambering onto each other’s shoulders, the audience taking the instruction to “pretend it’s your favourite song” to heart.

‘Candy Coated Lies’ starts with Han promising that “we’re going to show you why they call it a Hot Milk Party,” before a cry of “eat the rich”. The unfurling emo of ‘I Think I Hate Myself’ is dedicated to “anyone who ever hated themselves. You’re not alone in that ever, ever, ever. Trust me,” and towards the end of the set, Han dives into the front row turning the theatrical snarl of ‘Glass Spiders’ into an explosive moment of community. Rage, chaos, togetherness, Hot Milk champion it all.

When it comes time to leave the stage one song later, there’s a sense that no one wants it to end. “It’s been a shit couple of years,” starts Jim Shaw before the self-empowerment pop of ‘Awful Ever After’, his voice on the verge of giving out (“it’s not COVID, I promise”). “I hope it gets better,” he adds and as if on cue, the sun comes out. One more small victory to finish off a set of ultimate triumph. Welcome to the world of Hot Milk.

“I always feel like Sunday’s the one where you let it all go,” says Lauran Hibberd. We’re ready to do that. Despite having to contend with the sound bleeding from the other stages in literally all directions, her set on the BBC Introducing stage gives the crowd permission to go for it – to not worry too much about looking put together and just do what feels right. Her short appearance hits all the right notes, from the – surprisingly laid-back, given the subject matter – ‘You Never Looked So Cool’, a song about a dream where she was at her own funeral, to ‘Boy Bye’, which Lauran introduces by asking; “does anyone here hate men?”

By the time she closes with ‘How Am I Still Alive?’, Lauran Hibberd has the crowd singing along, and has cemented what we already knew – that next year she deserves to be higher up on the bill.

She’s not the only one, either. As an act that has grown ever closer to stardom over the last year, Baby Queen‘s live set invigorates her music with a new energy, trading soft synths for a thundering bass that easily riles up a fully packed tent.

‘Internet Religion’ proves that Bella has formed her own online cult, her sixth ever show pulling her biggest audience yet. Picking up a guitar for ‘Want Me’, the band test their chops and leave no one disappointed. A cathartic half-hour all round, Baby Queen proves that authenticity will never die.

After being drafted in to replace Machine Gun Kelly at the eleventh hour, Blossoms have got their work cut out for them, but they manage to pull off a revitalising set. Opening with the bouncing groove of ‘Your Girlfriend’, they also throw in ‘Honey Sweet’ and ‘If You Think This Is Real Life’, stacking up the singles as they build towards the inevitable conclusion of a ‘Charlemagne’ closer.

One surprising stand out is latest single ‘Care For’, which for a moment seems set to morph into Bee Gee’s ‘Night Fever’, sending even the somewhat exhausted dads at the back into disco mode. Anyone who has ever stepped foot on site at Reading on the Sunday will know that is no mean feat.

Sunday is big indie day at Reading 2021, and Wolf Alice are here to play the greatest hits. As they smash out bangers from across their discography, the band pack in everything from ‘Bros’ and ‘Giant Peach’ to ‘Smile’ and ‘How Can I Make It OK?’, stopping off at ‘Beautifully Unconventional’ and ‘Formidable Cool’ along the way.

Stripping things back to just vocals and piano, ‘The Last Man on Earth’ feels enormous and cinematic, every word given room to breathe. It expands into the evening air, floating above the festival site. Wolf Alice have absolutely nothing to prove, but the fact that they still seem astounded to be here might suggest that even now – three albums and just as many Mercury Prize shortlistings in – they still see themselves as on the rise. It’s a startling thought.

Standing on stage without any backing band, Holly Humberstone is an oasis of calm on a crowded Sunday night. “I think Gerry Cinnamon is on right now, so you guys are the true fans” she says with a laugh, the crowd cheering her along at every turn.

Each track is greeted like an old favourite, with clapping from fans and chants of Holly’s name filling the Festival Republic tent. ‘Deep End’ is a highlight, and latest release ‘Please Don’t Leave Just Yet’ also goes down a storm. Holly’s one of many acts who have created a fanbase during lockdown, but tonight she proves herself on stage in a way that few will forget.

A home for the alienated, his set summons modern political rage and rallies it behind a singular icon – as shown by moshpits on every side of the crowd, that message remains stronger than ever.

Showing off a large collection of rebellious tunes, Yungblud is spoilt for choice in just how he riles up his fans and although pop hit ‘cotton candy’ is missing from the set, a virtual guest feature from Machine Gun Kelly proves a hit.

Scottish icons Biffy Clyro make a huge return to Reading, maximising everything they have with a stage set to match.

Throwing out classic hits and more recent gems, an action-packed collection of riffs serve only to please. Heavy guitar thrashers make way for charming and recognisable melodies, with fan favourites such as ‘Bubbles’ feeling lost in time. Fireworks and extensive pyrotechnics make Biffy’s performance a celebration not to be dismissed.

Here it is, though. The big one. Our Sunday night headliner, Liam Gallagher, swaggers onto the stage. Straight away it’s all pints in the air and shredded vocal chords as the crowd screams along to the triple threat opener of ‘Hello’, ‘Rock n Roll Star’ and ‘Morning Glory’. Liam knows what’s expected of him and he holds up his end of the bargain, squaring up to the microphone and belting his lungs out.

It’s fair to say that his solo output is never going to be as well received at a festival as Oasis classics with three decades of cultural saturation behind them, but Liam is not one to simply phone in the hits, and he loads up the middle of his set with tracks from solo records ‘As You Were’ and ‘Why Me? Why Not?’

It’s wall to wall Britpop in the encore though, from ‘Acquiesce’ and ‘Cigarettes and Alcohol’ to the inevitable ‘Wonderwall’ which, despite twenty-seven years of talentless twats whipping out acoustic guitars at parties, still cannot be shaken from its spot as this country’s number one indie singalong anthem. If nobody can speak on Monday morning, we all know where to lay the blame.