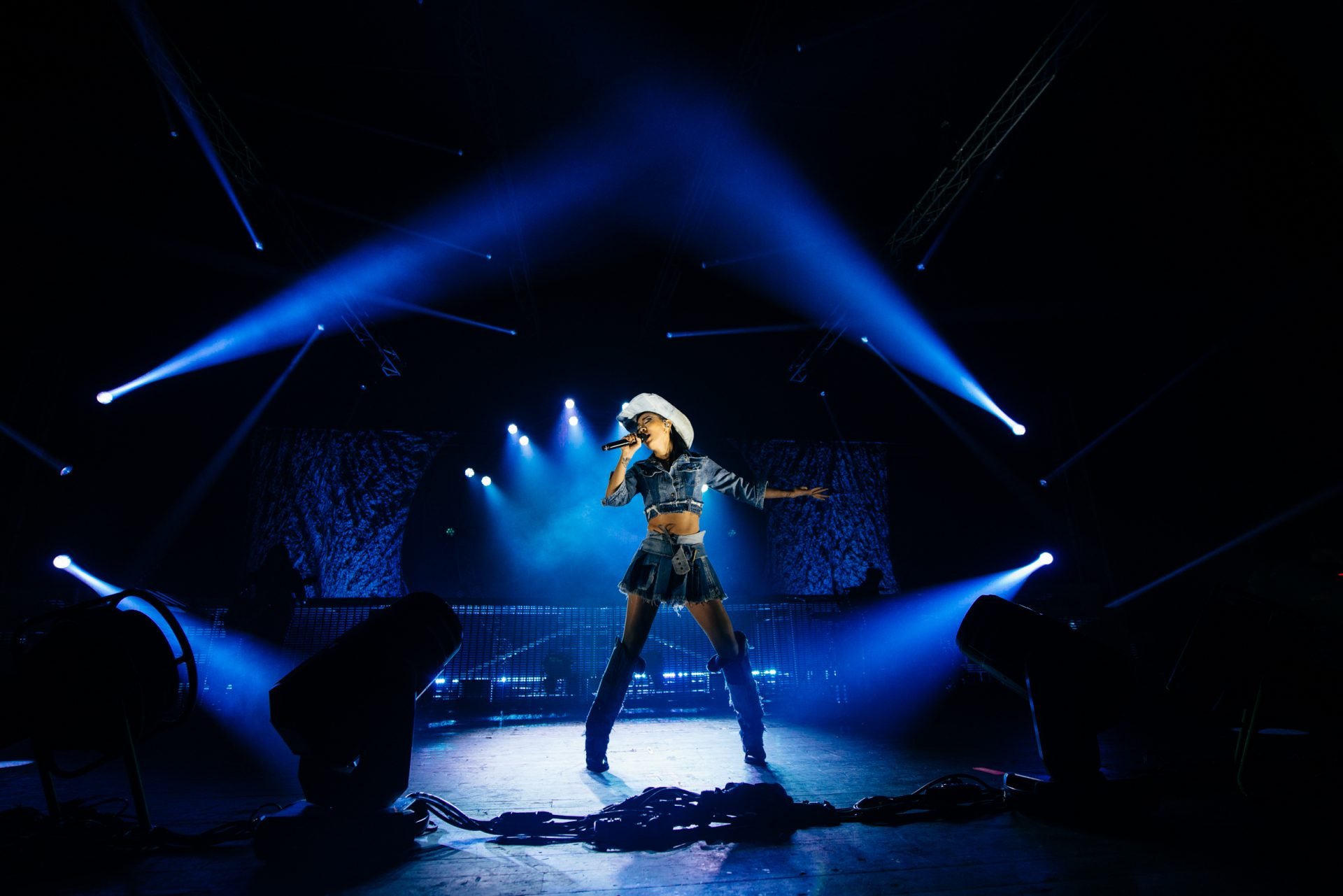 Why isn’t Rina Sawayama the biggest pop star on Earth yet?

Why isn’t Rina Sawayama the biggest pop star on Earth? It’s a question that keeps coming around, but more frequently than ever on her ‘Hold The Girl’ tour.

Conquering Brixton Academy on the closing night of a tremendous UK and Ireland run, she guarantees a “fucking hell” from anyone who’s seen it.

Her last tour, the ‘Dynasty’ tour in support of her lauded debut album ‘SAWAYAMA’, which finally went ahead little under a year ago thanks to Covid-related pushbacks, gave us a glimpse into what Rina was capable of. The ‘Hold The Girl’ tour is an immediate level up, delivering the kind of artistic growth very few could achieve in 12 months.

Atop an elevated metal platform and framed in a circle of spotlights, Rina steps out to a completely rammed Brixton Academy, a stage clearly designed with those at the back in mind (and trust us, the crowd goes as far as it possibly can). Caped in denim, she kicks off ‘Act 1’ with the affecting album opener ‘Minor Feelings’, her voice better than ever, and plunges straight into ‘Hold The Girl’, physically embraced by her two backing dancers.

Dropping into a more intense ‘Act 2’, Rina showcases her unmatchable versatility. Running through the rock driven tracks from ‘Hold The Girl’, she builds the bridge between this record and her debut, sandwiching ‘STFU!’ (led in with the iconic intro from Korn’s ‘Blind’) between ‘Imagining’ and newest single ‘Frankenstein’. Clearly an artist who doesn’t half-arse her live shows, there’s moments on ‘Hold The Girl’ that seem engineered for crowds, like the “AYYY AYYY” in ‘Your Age’, or the clapping and stompy kick drum in the bridge of the title track, which prompts a major ‘We Will Rock You’ moment.

Rina is a performer down to her bones. She’s got the kind of wow factor that made Lady Gaga so special in her early days, a real understanding of what it is to be a pop star and how to deliver a proper spectacle of a show. The tour was worked on by WFB Live – the team behind Dua Lipa’s triumphant ‘Future Nostalgia’ tour and K-pop superstars Blackpink’s ‘Born Pink’ tour, just so we’re understanding the scale of the show here – it’s an ambitious production that Rina naturally rises to.

Transitions that might otherwise feel clunky just work. An extended outro to ‘Holy (Til You Let Me Go)’ makes way for her rebirth as, in her words, “a couture jellyfish”, as she takes on four ballads for ‘Act 3’. It’s a welcome break from the intensity of the show so far, and a testament to both the production of the show and Rina’s artistry that she can make the venue feel like a stadium or an intimate room depending on the song. The tracks here are the emotional heart of ‘Hold The Girl’, hitting hardest on the spacious, mostly acoustic ‘Send My Love To John’ and soaring at ‘Phantom’.

She takes a moment to explain the themes of the album, how she took the time making it to heal her inner child. After that weight is lifted, the final act is pure euphoria, a dance party to shake it all off.

It’s a section that only further proves Rina can do everything, and do it well. A mashup of Eurodance banger ‘LUCID’ and Charli XCX collaboration ‘Beg For You’ indicates her main pop girl capabilities, while ‘SAWAYAMA’s biggest hit ‘XS’ beckons an encore. Sadly omitting usual staples ‘Cherry’ and ‘Cyber Stockholm Syndrome’, she makes room for a final song in the form of ‘This Hell’ – a point at which Brixton Academy was reaching boiling point, something even Rina on stage with her multiple wind machines had noticed as she mentions how hot it is.

Rina’s songwriting has long focused on feeling like an outsider, and it’s likely a feeling shared by her audience, so it’s incredibly rewarding to see how she brings them together. Defiant, campy and jubilant, ‘This Hell’ live is a perfect demonstration of how Rina Sawayama is able to create a community, one that’s growing by the day.