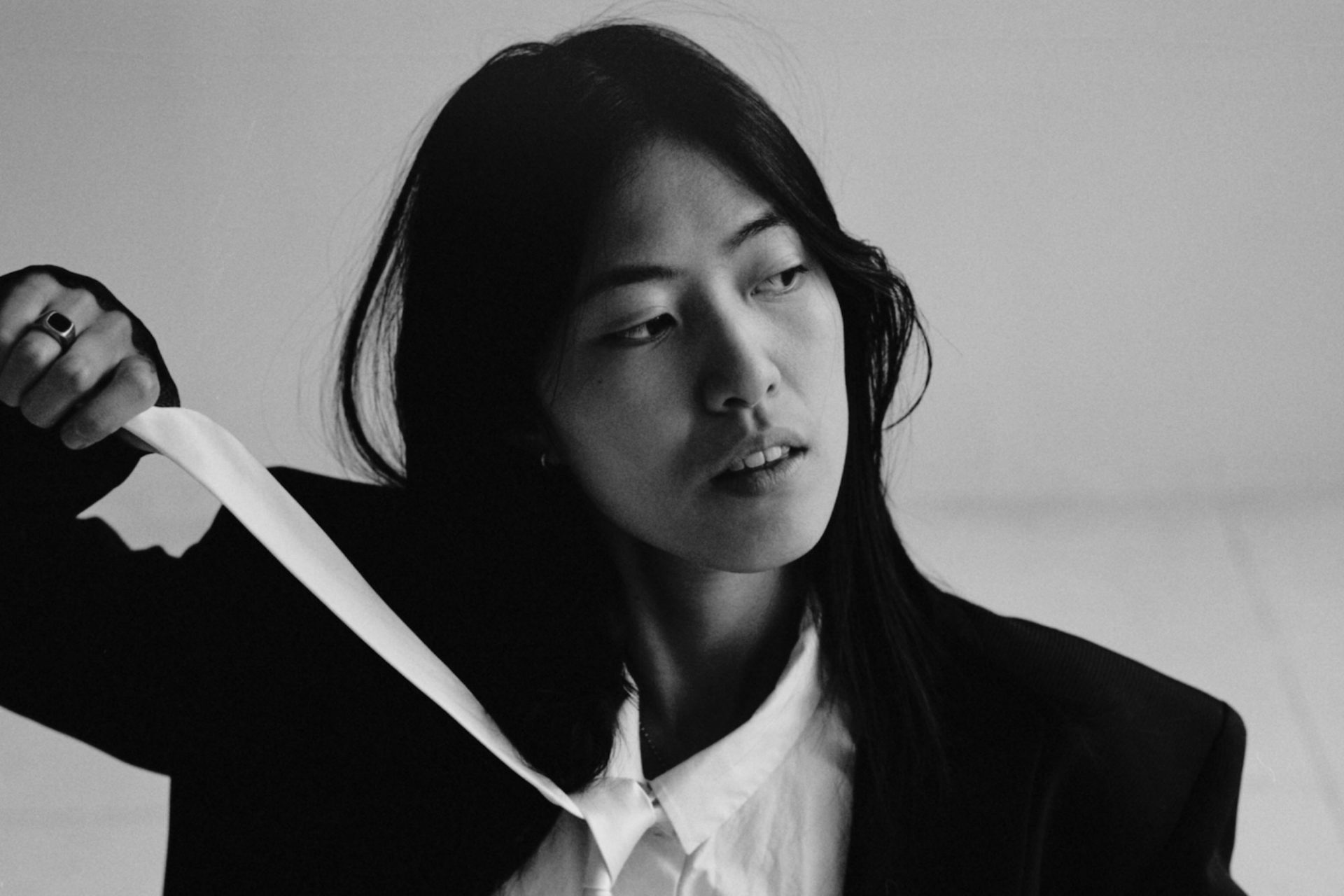 Deb Never: “All music is, is just feeling. It’s instinct”

With her intimate take on lo-fi grunge, Deb Never is shaping the sound of the future.

Slow-moving beats, delicate riffs, and a blanket of mellow vibes: that’s the irresistible sound of LA singer-songwriter Deb Never, who burst onto the scene in 2018 with her atmospheric debut single ‘mr nobody’. Three years on, she can not only boast a BROCKHAMPTON collab and a support slot on slowthai’s upcoming tour; she’s winning hearts across the globe with her relaxed charm and laid-back rhythms. Calling in on a sunny Thursday, ahead of a busy day in the studio, she gives us a little peek into the inner workings of her mind.

Deb Never started her musical journey early. At 11, she taught herself how to play the guitar; at 15, she was already making music – all in the comfort of her own bedroom. No audience, no prying eyes. or ears. “It was like a secret to me,” she reveals. “No one knew because, to me, it was like a diary. It was like therapy. I’m not really good at playing guitar but, with what I do know, I love just being able to make something and get my feelings out.”

It’s this genuine approach to songwriting, the ‘I’m not trying to be perfect; I’m just trying to make good music’ attitude that makes Deb Never’s sound stand out in a world of polished production and clean-cut mastering. That and her unbeatable lyricism: with an abundance of attention-grabbing one-liners, Deb always hits the mark. Take breakthrough single ‘Ugly’, for example. The honesty and vulnerability behind emotion-soaked moments like “Am I that desperate to feel the way that we used to? When you don’t want me, but I need you” is undeniable, making her music not only extremely accessible but wonderfully relatable. Not least because she excels at being impressively specific and conveying each emotion spot-on.

“For me, it’s so important to come at it in a way where the perspective is interesting, and it’s not just ‘I feel terrible’,” Deb explains. “I’m not saying that’s wrong; it’s just sometimes I get in my own head where I’m like I want to be able to put this concise and correct. For me to be happy with it, feeling like I got what I want to say across without feeling cringy about it, that’s the hardest part.”

Songwriting is a tricky thing, a skill that we’re not sure you can actually learn if you’re born without the Lennon-McCartney gene, but what certainly helps is a working connection with your emotions; being able to pull from the darkest corners of your mind palace without being afraid of judgement.

“Sometimes I have to push myself,” Deb says, talking about dropping all of her walls within the safe space of her music. “Only because, in my real life, I’m so happy and easygoing. I’m able to cut that emotional part out in a way. In real-life situations, if something happens, I’m like, ‘ah shit, I don’t care.’ But then, when it comes to music… Music is a representation of who I am on the inside, and I’m super sensitive, like could break easily kind of sensitive. When I’m making music, that’s when I release my emotions.”

Deb Never is the perfect example of a little thing called layers. She proves that people are not just one thing, but three-dimensional. Meeting Deb feels like standing in sunlight – calm and cosy. It’s hard to imagine that she would ever be fazed by anything. But when you listen to her music, she allows you to see a whole different side of her –one that is raw and emotional- and maybe that perceived dissonance makes it even more special, like being shown to a secret backroom reserved for members only.

But even then, there are different levels to her depths, and not all of them are meant for a broad audience. Her most intimate work to date is her ‘Intermissions’ EP, a collection of pure, unfiltered acoustic-driven tracks, all recorded in quarantine and released only on Bandcamp and SoundCloud.

“I purposely didn’t put ‘Intermissions’ on any big streaming platforms,” Deb reveals. “I actually hadn’t planned on putting it out at all. It was just a bunch of songs I made over quarantine because I was feeling restless. It was all a certain type of music – very intimate, acoustic-driven – and I told my manager: ‘I don’t know where to put this. I don’t know if I want this to be the next EP’.”

So, they found a way to get it out by raising money for essential workers, with 100% of the EP’s proceeds being donated to Direct Relief to support healthcare providers working on the coronavirus’s frontline. Deb summarises: “It was a win-win with that one because it was an outlet for me, but it was also a way to contribute.”

Talking more about the inspiration behind the EP, she explains: “It was how I was feeling at the time, which is also why all the songs sound super intimate: because it was in a time where like you look outside, and the streets were completely quiet during traffic hours. It’s this bizarre, weird, isolating feeling. Everyone’s in their homes, there’s no noise outside, and you don’t feel any energy.”

An eerie mood snakes through the entire record. Dressed in broody soundscapes and reverb-coated vocals, Deb allows you to drown in your feels for 20 minutes as she soundtracks the end of the world as we know it.

Even though ‘Intermissions’ strays from the typical Deb Never sound of muted chords layered over booming bass drums, they do share one very vital quality: it’s Deb following her intuition and gravitating towards sounds that feel good to her in the moment instead of being guided by trends or other people’s opinions. “That’s the thing with music – there’s no formula, there is no answer, right or wrong,” she muses. “All music is, is just feeling. It’s instinct. You gotta learn what makes you feel something or trust your gut. If there was a perfect way to write a song, everyone would follow that structure.” She adds: “I don’t ever want to consciously chase something. I don’t want to chase another sound; I just want to get better for me and make what I want to make.”

Deb Never has come a long way from making music in her bedroom, and almost bailing on her first live performance (she was too nervous), to gearing up for her first ever UK tour next year. At this point in time, she may just be one of the most authentic artists in the game, not just in the way she refuses to be chained to a single genre but in her passion for uplifting others.

“When I first started, I was making music for me because it was my way of getting things out. But, more recently, I was thinking about it, and I love that people can listen to my music and feel like they’re not alone. Never in a million years did I think I would make music, and people were gonna listen and relate. But now, I want to be that person!” Deb describes her fresh intentions. “Or develop a sound that paves the way for other people, especially females. It’s so hard for women in any type of industry but also to be able to make music and be like ‘fuck it, I’m gonna do whatever the fuck I want’. I want to be that for other girls who listen to my music.”

A defiant role-model, Deb Never is definitely not one to shy away from conflict when it comes to standing up for herself and for her art. There is no holding her back or confining her sound to a neat little box. She adds: “I think just being a girl, naturally we’ll always experience that in some way, but I’ve always been headstrong – the more you tell me to do something, the more I’m gonna try to not do it.”

A character trait that, as Deb admits, does sometimes get her in trouble, but in a world as problematic as ours, a little backlash is a small price to pay for equality. Her message? “Do whatever you want. Don’t feel pressured or that you can’t just because you’re a girl.”