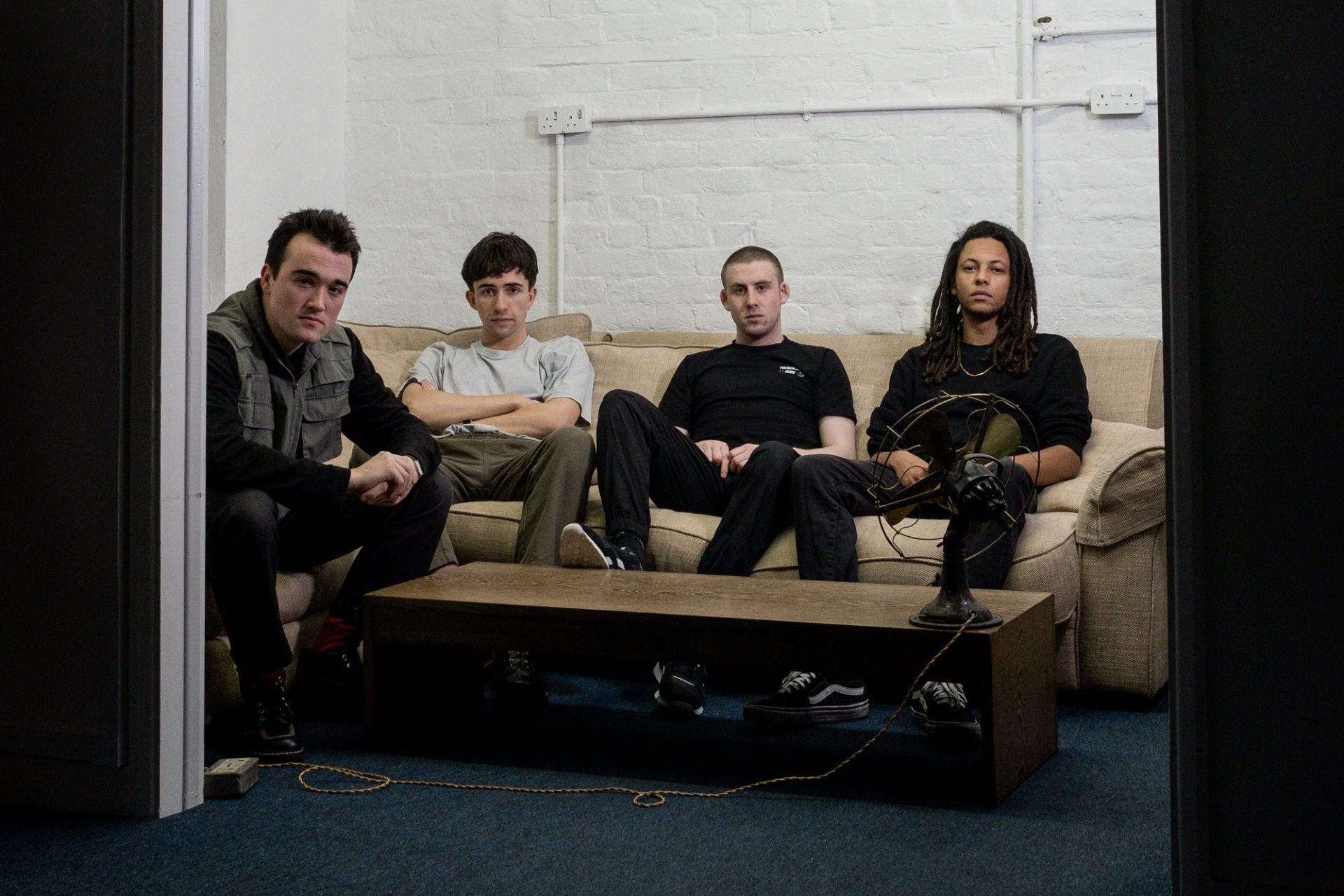 London-based collective Folly Group are gearing up for a big ‘Q3’ and ‘Q4’ with a new EP, and a support tour with Do Nothing.

As far as origin stories go, London four-piece Folly Group have a pretty simple one. “It was just me and you, Lou, on the tube,” explains vocalist and drummer Sean Harper. “You sort of went over to me, and into my ear, you slurred the words, ‘Band? Stupid not to really’.” For a group seemingly named after a shared fondness for foolishness, it was a pretty smart call. “I can’t remember the journey,” shrugs guitarist Louis Milburn.

A couple of years on and a couple of extra bandmates later, Folly Group are gearing up for the release of their debut EP, ‘Awake and Hungry’, the inaugural release from So Young Records. Summer is beckoning, and with their first national tour and festivals on the horizon, something tells us that Sean is excited at the prospect. “Are you kidding? That’s gonna be fucking unreal, man.”

This bank holiday Monday, however, it’s been pissing it down. Louis and Tom Doherty (bass) are dialling in from their shared flat fresh off a viewing of Emperor’s New Groove, while Sean has been cosying up with Prison Break (quintessential lockdown viewing, no doubt) after facing the elements earlier. “It’s about the shittiest weather I’ve ever seen in my life. There’s windy, and then there’s when it just fucking rejects you. And it’s that right now. It’s so grim.” As for Kai Akinde-Hummel (percussion/samples), he’s nowhere to be seen.

“Kai is supposed to be coming; let me bell him,” starts Louis, reaching for his phone as Sean interjects. “He’s done Folly Group interviews from the train before. He’s on his own timetable.” We hear one side of a brief back and forth (“Yeah yeah, it’s in the Whatsapp.”) before Tom spills the beans. “I can just hear him saying, ‘Oh shit! I’m joining’. So what that means is: I forgot, but yeah, I will join.” With all the smirks and chuckling going on, it’s less like an interview than eavesdropping on a group of old mates.

For an outfit that was born from a very literal “Band?” question on a drunken tube home – “Me, Louis and Tom moved in together, and it was guitar, bass and drums, so we were like, ‘Might as fucking well’,” explains Sean further – Folly Group don’t have much interest in traditional indie band line-ups. When they enthuse about music, it’s nearly always electronic rather than rock — names like Lorraine James, Floating Points, and Holly Herndon crop up frequently — and that’s where Kai’s talents with a sampler have proved pivotal in defining the band’s sound. As Louis succinctly puts it, “I mean, I like post-punk, but not that much.”

That sentiment runs into how Folly Group presents themselves. “‘Group’ seemed to connote something – well, I mean, obviously connoted something – more democratic than ‘band’,” explains Sean. Press releases frequently refer to them as a collective, an attempt to acknowledge how far the creative process extends beyond the four of them. “I wish we could have everyone on the interview. All the people that make the videos and costumes. The people that do everything. But that’d be chaos,” says Louis, laughing. Maybe on a Zoom call with a few more interviewers and breakout rooms…

More than that, the word ‘Group’ reflects a shared ambition that Folly Group will one day extend beyond the world of music. This is a band — sorry, collective — that’s released two of their own self-produced remixes of tracks from their debut EP before it’s even out. What else is in store? They’re a little cagey. “I don’t want to say too much. I don’t want to set [us] up for a huge failure,” Louis explains, but his goals are quickly outed as Tom deadpans — “Rock opera.” Maybe a Folly Group cryptocurrency, we suggest. “We fucking made that joke ourselves,” says Sean wryly.

Still, at the end of the day, we’re all here for the music, and the boys know that. Folly Group are post-punk in the true sense of the word, drawing on a whole range of influences from outside of the world of big riffs and bass licks. Or, in Sean’s words: “We make weird hybrid guitar music that is 100% just the sum of various influences.” “Right yeah,” continues Louis. “We’re a kind of four-limbed vessel for turning lots of complicated ideas into one idea that’s not really the sum of its parts.”

Self-deprecation aside, their new EP is a scorcher. For Folly Group, it’s both the closing of an early chapter (“A fond farewell to the formative period,” as Sean describes it) and a product of their recording environment. Sean, Louis and Tom were hunkered down in one house while Kai radioed in his contributions, explains Louis: “It was the three of us locked in a really, really small house — way too cramped for three fully-grown blokes in such a small, decaying—” “Shithole,” butts in Tom. “We were helped enormously by the fact that we had an extremely kind and an extremely deaf next-door neighbour called Roger, so big up Roger,” adds Sean with a cheesy grin. “Not one complaint.”

But how about contributing from outside of the makeshift bedroom studio? The band had already been playing together for six months before the first lockdown, so the dynamic was well in place, but there were definitely complications for Kai. “It was just a lot of recording percussion in my bedroom and pissing off my flatmates. I didn’t have such a lucky setup as these guys. We were all inside constantly, so having me banging away on like agogô bells and woodblocks wasn’t ideal. I have all these files on my laptop, and I’ll be like, ‘Oh, what’s that?’ and it’ll just be silence and then really loud cowbells. What was I thinking?”

In 2021, the realities of being cooped up in a shithole are pretty universal, even for those of us not recording flatmate-troubling belters. That’s something the band have definitely been thinking about, as Louis explains. “It’s quite interesting, the prominence of guitar-based music at the moment, because I always think — well, it’s not mending any broken hearts, is it? It’s a very kind of active energetic genre, there’s always a transference of energy. And it’s interesting: how are people who are locked down listening to this music? Someone just sat in a room like, ‘Yeah, I’m gonna listen to some loud shit now’. But maybe that’s why it’s important now because people don’t have a way to bring that energy into their lives so much. Maybe that’s why people are liking it again.”

When we suggest that listeners might be coming to Folly Group to live out their future live music fantasies, it’s met by another round of guffaws. “I don’t want to use the word escapism in an interview because I fucking hate it, but there’s definitely an element of living vicariously,” says Louis, before Sean juts in. “I mean, if we’ve made anyone look forward to anything, then job done.” It’s a strong mission statement, and one that reflects the prospect of the summer ahead. If nothing else, we can all look forward to drunkenly slurring “…band?” and ambling to a gig together.

Taken from the July 2021 edition of Dork, out now.  Folly Group’s debut EP ‘Awake and Hungry’ is out now.