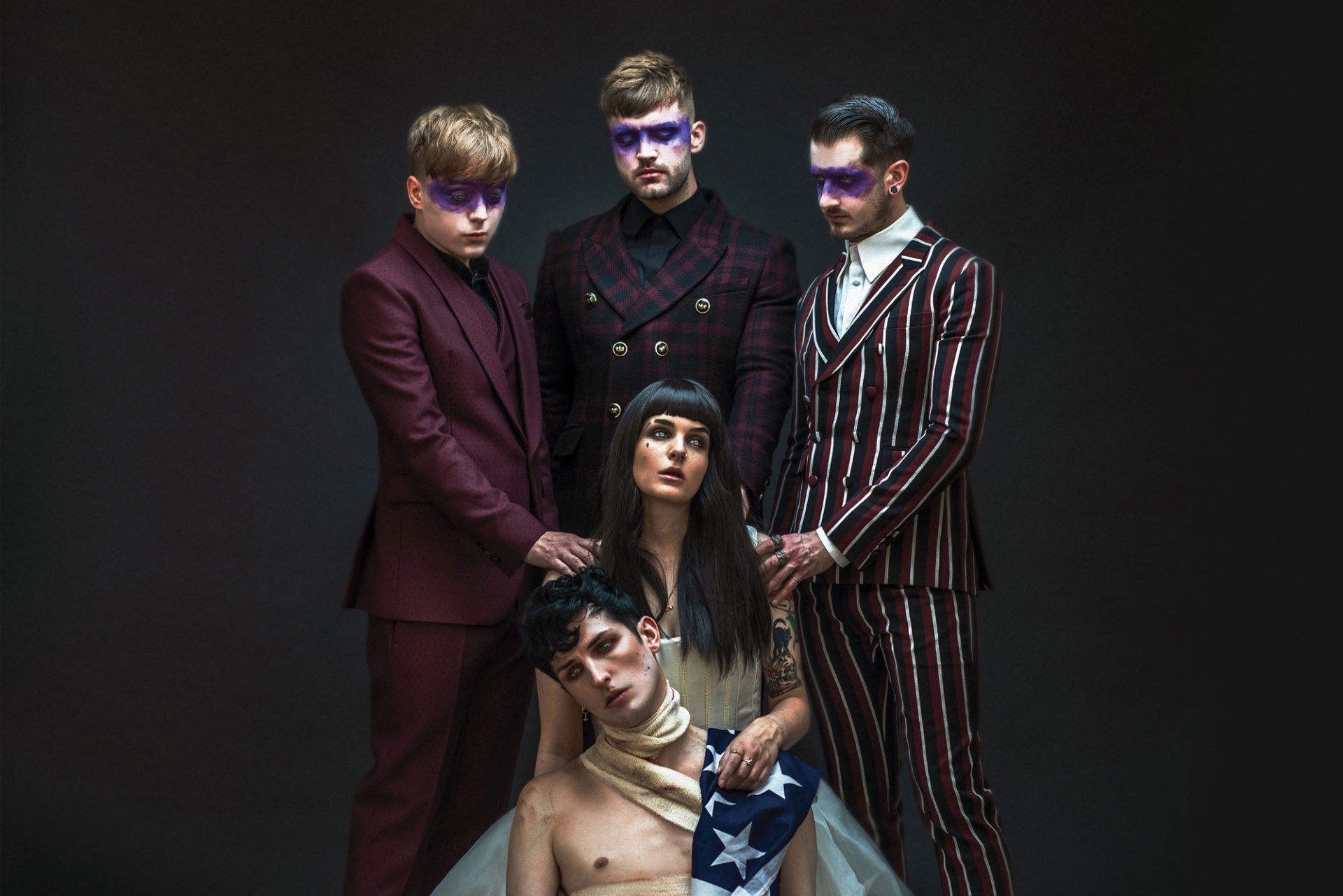 Creeper: Back in noir

Creeper don’t do anything by halves; their new EP is just as grand as you’d expect from rock’s most interesting band.

It’s been a funny old year, but for some, the unexpected turmoil has offered up the opportunity to see out some unfinished business. Creeper’s new EP ‘American Noir’ sees the band revisit their 2020 album, ‘Sex, Death, and the Infinite Void’.

“We had a load of music that was leftover,” Will Gould explains. “When I was trying to work out where we went from our last album [2017’s ‘Eternity, In Your Arms’] to this one musically, it was a real nightmare of a transition because I didn’t quite know how to write the songs I wanted to write. Towards the end of ‘Eternity, In Your Arms’, we were playing with a bit more theatrical style of music and listened to loads of different music, so we were like, how do we write this stuff? How do we start? How we do get good at this?”

“It’s a different set of skills that goes into writing a Bruce Springsteen song as opposed to an Alkaline Trio song. They’re both challenging, but we’re much more trained in how to write punk songs. We wrote so many songs; there are so many more that aren’t on this EP. We were lucky enough to have about 60 songs we wrote for the album because we were trying to write something really nuanced, and that took a lot of trial and error.

“There were some we couldn’t lose. We ended up with a bunch of really good songs that my girlfriend said were some of our best ones, but they never made the record! They’ve been sat in a folder on my phone like a graveyard where files live forever, never to see the light of day like some sort of purgatory. With our line-up change, coming out of a pandemic, and the relaunching of touring and hopefully the return to normal life, I felt like it was a good time to re-explore some of these and put out something to the world that serves a plan as well as our record coming out a year ago and we haven’t had the chance to tour it.

“I didn’t want to go in and make something completely new with a new set for it because I didn’t get a chance to do this one yet. Trying to do this was the right move as it was expanding on what we did; it tells the story after [album character] Roe’s passing at the end of the album, and as a band, it’s music we were really really proud of.”

The band re-examined all the material they had in reserve to see if they could piece together something new, and found they had a lot to play with. As Will points out, recent single ‘Midnight’ was written on the same day as album highlight ‘Thorns of Love’, but they still sound different. “It was always naturally going to be that way,” he considers, “because these were songs written to originally get to somewhere. They were about the journey of the song. For example, the song ‘One Of Us’ I’m really proud of, but it’s one of the ones I regret not putting on the record itself. I was at a grand piano, and Ian [Miles] was on electric guitar, and we just wrote this bit and made that chorus really high and difficult to sing. Then we’re like, okay, cool, let’s fuck around with this. Let’s try and roughhouse something with samples to try and do this.

“These songs are experiments. For example, ‘America At Night’ is a grand, really dramatic lush song about living in America, and I think that one, in particular, would come on the last record if it was placed right. I think that if you’d jumbled up ‘Sex, Death, and the Infinite Void’ and put it on shuffle you’d be like, how do all these songs exist on the same record?”

Turning his attention to the title, Will reveals that ‘American Noir’ was originally meant for the album. “We met this really eccentric guy who had worked with Miley Cyrus and Britney Spears and stuff. He was really weird, and I loved him. I told him the story of this record that we wanted to make, but we hadn’t really started working on it at that point, and he was like, okay, what’s it called? I was like, I don’t really know. I imagined it like a noir film, but it’s based in America, and he was like, ‘American Noir’!

“So it was a chance to reuse the working title like with how Star Wars was called Blue Harvest at first. We felt like there was a chance to reuse something that we felt close to, and the last record was a very dark period of our personal lives. It’s a dark period in time, and obviously, look where we are now. In terms of its narrative, I think ‘American Noir’ was apt for the subject matter.”

Will also saw this EP as an opportunity for bandmate Hannah Greenwood to shine. “I went into a cocoon of trying to write songs for Hannah because we wrote ‘Crickets’ on ‘Eternity, In Your Arms’ for Hannah, and she was really reluctant at first to step up, and when she did, she was just fantastic. She’s so good. She’s such a brilliant talent; you just can’t believe it when you see her perform.

“In the end, I wrote a bunch of stuff and recorded a load of it in LA, and I was like, well, we want to get Hannah out here. She started singing the songs, and it comes alive when she sings it. I’m not a classically trained singer; I’m just some weird punk rock chancer making it up as I go along, but she’s amazing.”

As for how Will feels about ‘Sex, Death, and the Infinite Void’ a year on, he says: “It’s the best thing I’ve ever done. It’s the best thing I’ve been involved in, by a long shot. I’m really, really proud of that record. It’s funny because the thing is, as creative people, we critique everything we do to ridiculous degrees. Usually, you look back on it a year ago and think fucking hell, that’s awful!

“I’m just so proud of it. It’s such a good album. I can remember every moment, where and when we were doing it, how I had to bend everything to fit into a narrative all the time, alongside all the tragedies in real life, like speaking to Ian when he was in a psychiatric hospital in the UK about what was going on with him and the conspiracy theory he was believing in, while I was in LA in an Uber. It’s all these different minutiae that go into this really textured piece, and then you listen to it, it’s the story of Roe and Annabelle and Calvary Falls, and it’s got the Los Angeles Philharmonic Orchestra on it!

“It’s crazy how this stupid little punk band we started in Ian’s mum house has become this. I’m really proud of it. If I was a kid and that came out, I would really really enjoy it! What I’m trying to say is, I feel like I haven’t picked it apart, and I don’t hate it as much as I hate some of the other things I’ve done. Is that a good thing or a bad thing? I’m not sure. You get what I mean, though. It’s sometimes difficult to love stuff that you’ve done, but this is something that I’m very close to, and I feel is an accomplishment over the adversity in our lives.”

Taken from the August 2021 edition of Dork, out now. Creeper’s EP ‘American Noir’ is out 30th July.