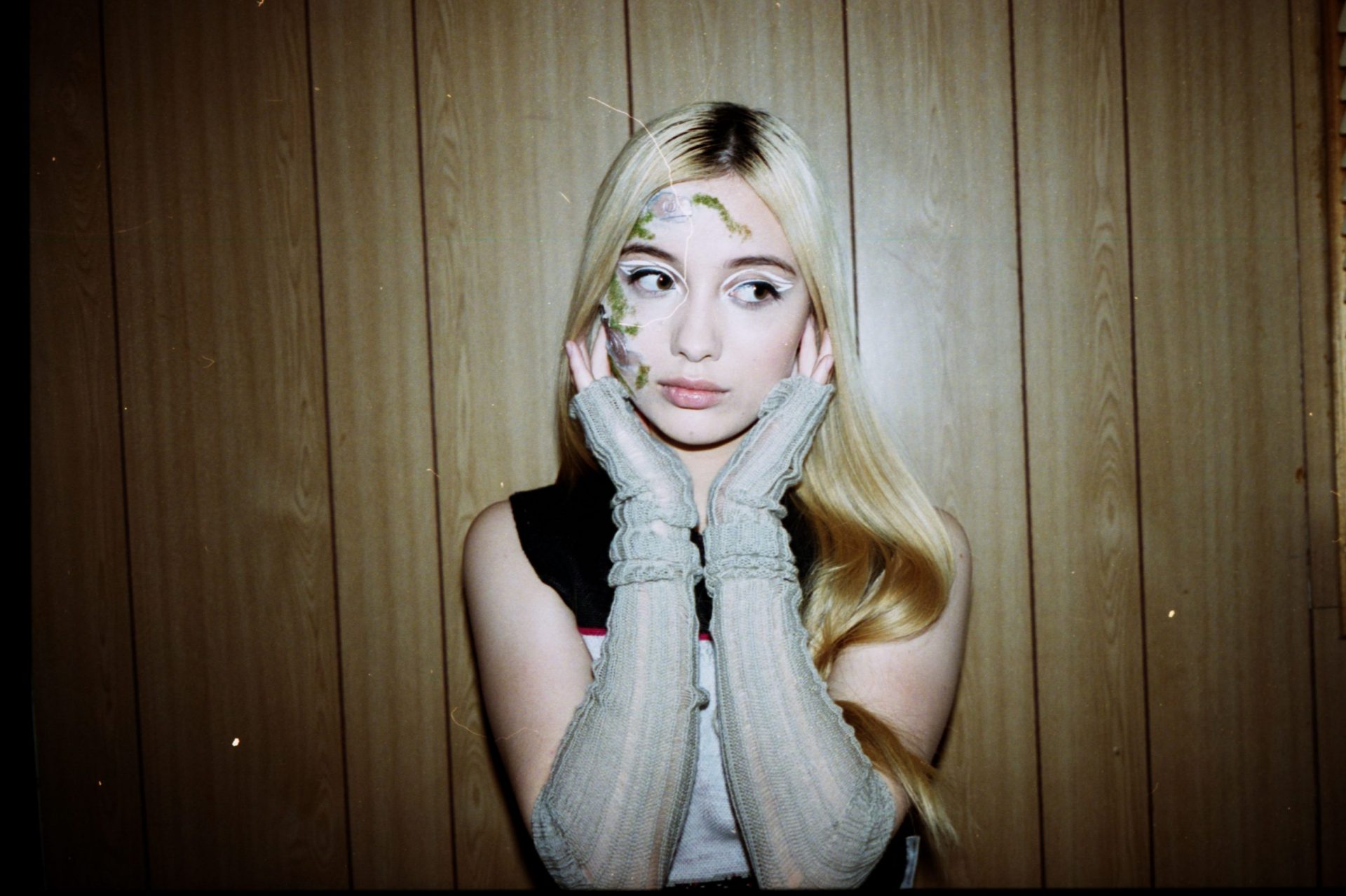 Daine: “If some crazy guy in a suit and tie is puppeteering me, he must be a genius”

Bridging the gap between pop royalty, rock icons and everything in-between, Daine is a star from the modern school – genre-flipping, hyper-energetic and fearsomely creative.

“Everyone’s saying ‘in two months, your life will be the biggest it’s ever been’.” Daine is talking about the Venus retrograde that’s just ended. “My friend was like, ‘you’re gonna be really famous in two months’. That’s what the retrograde is saying for everybody.”

Astrology buffs say 2022’s Venus retrograde allowed for internal reflection on our career motives, which might explain Daine’s indifference towards the release of their upcoming project ‘Quantum Jumping’.

“Hmm, mixed feelings,” they sigh from the other side of the screen, where they’re sitting in her Melbourne bedroom. It’s 10pm, and they’re bundled up in a fleece.

“It’s more of a compilation, I guess; it’s all the songs I wrote when I first started making music. There are one or two newer ones in there, but for the most part, everything was written when I was like 16. It sounds quite youthful to me, I don’t know if it sounds that way to other people, but it’s definitely like, a homage to like my youth.”

Considering Daine is still only 19, that concept sounds crazy, but once you get familiar with them, you’ll find they’ve already lived a few musical lives. Primarily a new-age emo star, they’ve dabbled in hyperpop on single ‘boys wanna txt’ with the scene’s key players Ericdoa and Dylan Brady of 100 gecs, they’ve dipped her toe into something more hardcore on ‘SALT’ with Bring Me The Horizon poster boy Oli Sykes, and played with emo trap on early single ‘Ascension’.

Shapeshifter they are, none of the above appear on debut project ‘Quantum Jumping’, although it’s still a buffet of their influences. Largely inspired by Midwest emo, they look up to the posters on their wall to reel off some of their influences – Basement, Citizen, Adventures, You Blew It – except it’s not emo the way you might think. It’s emo via 2014 Tumblr, guided by Charli XCX, and made by a former One Direction and 5 Seconds of Summer mega fan.

Opener ‘cemetery dreams’ is one of the first songs they ever wrote and pulls together their lo-fi emo side with melodramatic pop melodies. By the time we get to closer ‘new ground’, we’re in much brighter territory, more indie, written at a time when they were listening to lots of Snail Mail and Alex G. In between, ‘Weekends’ nods to Lil Uzi Vert – “It’s soooo 2018,” says Daine. “It feels a little bit dated now, even though I was like 16 and had just gone into a SoundCloud frenzy for the first time” – and ‘glitter’, their self-professed ‘most Midwest emo’ song, has an airiness to it akin to The 1975.

Legend has it that Daine met the frontman of her long-standing faves at Laneway Festival, the very same day she was introduced to Charli XCX. After playing mini-golf with the pop legend (not jealous at all), and attending the festival, Daine met Matty Healy. “It was so brief, and Charli’s telling me ‘chill out’ because I had my Red Bull in my hand, and I was shaking. My A&R and Charli were like, ‘stop it!’.”

Daine is pretty much living the dream right now, but the words ‘A&R’ seem to strike fear into them. Once labelled an ‘industry plant’, it’s a notion they’re desperate to shake.

“It’s hard because I’m so genuine with my project. I understand that I have the massive privilege of being backed by a major label, but I truly do make all the calls when it comes to my creative direction. I creative direct all my videos. I’m incredibly hands-on with everything. So when people are like, ‘they’re in like a cult’ and ‘they’ve got rich parents’ and that stuff, you guys are fucking insane and know nothing about me.

“There must be some really, really, really, really fucking cool genius executive if they’re able to pull off the direction that I’ve chosen. I don’t think anyone at any label is smart enough or, you know, in with the kids enough to do what I do. I’m not saying that in like a stuck up way, but just in a genuine way, ‘cause what I do is very targeted. I have my own specific niche. So if some crazy guy in a suit and tie with billions of dollars manoeuvred that and is puppeteering me, he must be a fucking genius.”

Daine is clearly determined to stay true to their art and vision, although they have no interest in being relatable to their audience. It’s interesting to hear, considering their music is often very personal and honest, and they partake in similar social media practices to their gen z peers (hello Instagram photo dumps), but they want to replicate how they felt about musicians growing up for their own fans.

“I’m trying to resist the idea that artists have to be influencers who are relatable and vulnerable. I am vulnerable, but at the end of the day, Daine as an artist persona and not as myself, is a project. It’s an entity, and it’s not who I am in my day to day life, and I don’t think anyone’s artist persona reflects who they are. I don’t want to blur the two.

“Growing up from the early 2000s to now, there’s this huge part of magic in music that we’ve lost because artists are forced to be so relatable and human. I also think it creates a huge culture of disrespect in stan culture –  people will tear apart artists that they make fan accounts for. I just hate that pressure of having to be so accessible to everybody. It ruins the magic. There’s got to be something magical and intangible about a project because that’s what gets people excited.”

Perhaps that’s why for a while, they only appeared in music videos in CGI form; even on the cover of this mixtape, they’re animated. There’s a mystery surrounding them that mirrors that of PinkPantheress – just going about their business from their bedroom and blowing minds all over the shop.

Keeping a low profile has meant Daine’s life doesn’t actually look that different from any other 19-year-old’s. Between working with hyperpop royalty Lonelyspeck and Danny L Harle, and lining up collaborations with hardcore hard-hitters Trophy Eyes and Jesus Piece, Daine had enough free time to hold down a full-time job up until last year. That’s not to say it hasn’t changed at all, though; the title of this project is a reference to the lightning speed at which they emerged.

“Quantum jumping is a word used to describe when someone jumps from a parallel universe into another one. That’s kind of like what being 16 felt like to me because I was in school, and all of a sudden, I had a breakup, I became incredibly ill, I started making music. It didn’t start popping off, but it started to present itself as viable. Then, I just dropped out of school and was making music, and it felt like my world did a 360.”

‘Quantum Jumping’ drops on the night of a full moon (coincidence or Lorde-like astrological calculations?), a time often associated with clarity, heightened intuition and some self-doubt, but most importantly, sudden life changes. Come in Planet Pop, Daine has arrived.

Taken from the April 2022 edition of Dork, out now. Daine’s mixtape ‘Quantum Jumping’ is out now.