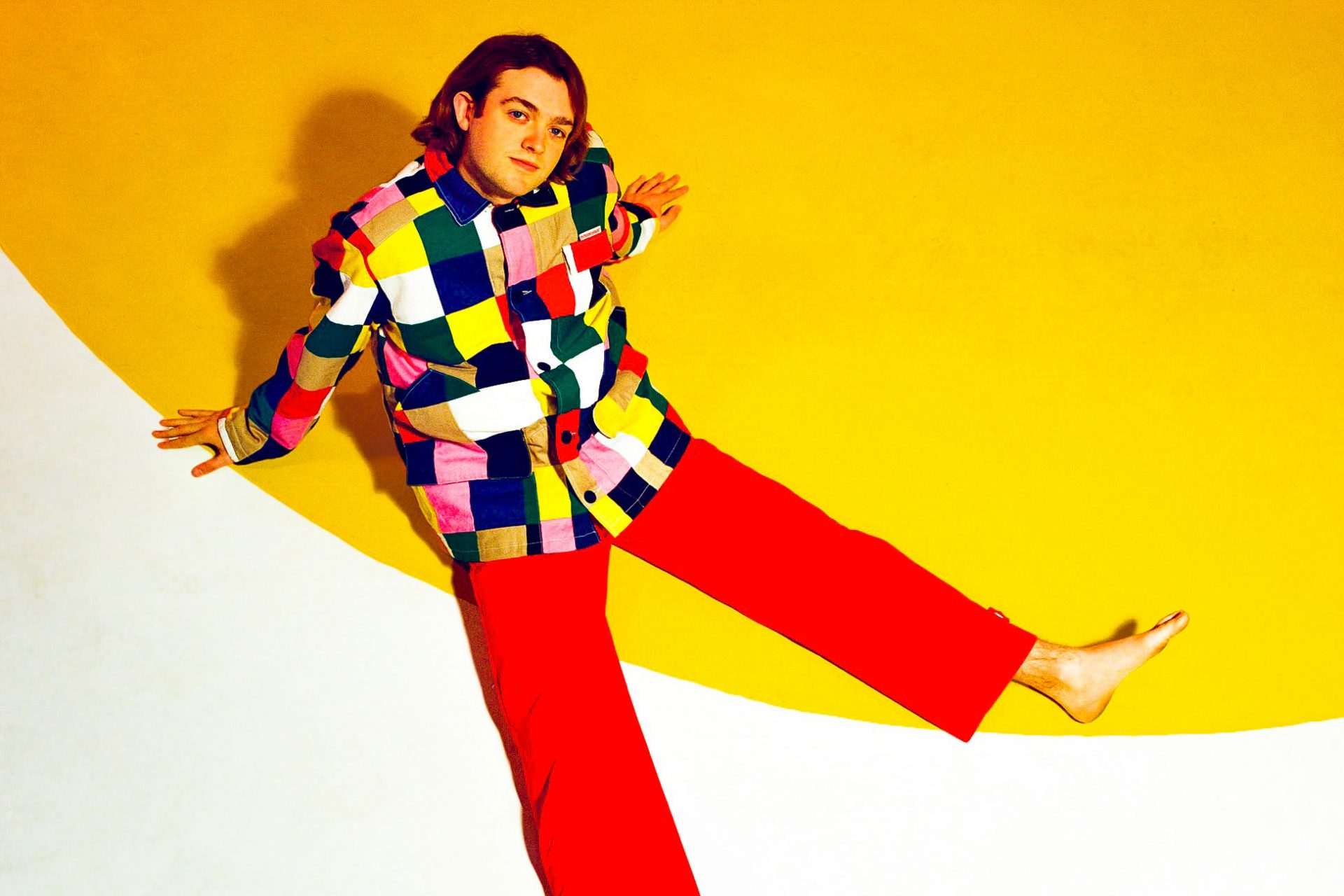 Dayglow: “With all this new attention on me, I started to feel like I was living in a sitcom”

After a back-yard recorded debut that blew up, Sloan Struble’s Dayglow is back with a follow-up that’s only set to get bigger still.

Three years after exploding onto the bedroom pop scene with debut project ‘Fuzzybrain’, featuring huge indie teen anthem ‘Can I Call You Tonight?’, Sloan Struble – aka Dayglow – is back with a new album that integrates his contagious positivity with a fresh yet nostalgic sound.

Dayglow is a moniker that Sloan adopted while crafting his globally successful debut from his friend’s backyard – who needs bedroom pop when you have shed pop? “He had this storage shed that wasn’t in the best shape, and I asked him, because they weren’t using it, if I renovate that, can I use it as a studio? So we put in the insulation, electrics, went full out on everything – and it worked great!”

‘It worked great’ seems a significant understatement after the resulting tracks went on to rack up close to 200 million streams, defining a subgenre on a global scale and only gaining popularity as the population retreated to their homes and popped on the headphones. It’s made it hard for Sloan to even begin to picture his own success.

“The timing of this year and my growth is really unique and strange – it just doesn’t click at all,” he reveals. “Once I can see crowds, it’ll make more sense. Like okay, this many people showed up, and next time, I want to get more. For now, though, I’ve done a year’s worth of interviews and self-growth in the same room; I see my numbers grow every day, which is cool and interesting, but only live shows will really make that clear, I think. The internet is just crazy.”

The dark cloud of the lack of fan interactions through live shows over the last year, fortunately, has had one clear silver lining: Sloan hasn’t been subjected to the pressures of living up to his own hype and has therefore been able to move forward with ease. On pushing his artistic direction, he confirms that, it “thankfully happened really naturally. I didn’t have that slump that often happens with the pressures of a sophomore album, and that mainly comes from growing up. My influences changed naturally, and so my album was bound to be different this time around. I was pretty conscious of change, though, I do want each album to feel like its own world.”

Moving on from the world of bedroom pop hasn’t been too difficult on this second record as it is a pigeonhole which the Dayglow project slipped into almost by accident. “My approach to bedroom pop wasn’t on purpose; it came pretty naturally because I was young and making music in my room, so it naturally slotted into that category. With no disrespect to any artists, the general sound of bedroom pop is ‘lazy’; that’s what makes it what it is. I thought people would start upping the production value, which would then define the level of everyone’s second album sound, so I focused on putting more effort into that side of things too.”

Although the sound on ‘Harmony House’ certainly shows this invigorated approach, the youthful energy and excitement is clearly still the primary channel of expression and a core aspect of Dayglow’s appeal. Whether it exhibits itself with lo-fi guitar tracks or 80s pop ballads, the euphoria always seems to seep through the very essence of the music.

“Optimism is never taken seriously in art,” he proclaims. “For some reason, the art that’s taken seriously is the starving artist who’s really upset and angry with something. Some happy music can be generic and have no real meaning, sure, but what people miss about optimistic music sometimes is that while being an artist and being consumed by your art, you’re inevitably going to spend a lot of your time being disappointed. The art is about what you do with that disappointment, so that’s where I get my optimism.

“One of my goals with Dayglow is to be honest with myself about the things I’m going through, addressing things other people are going through, but maintaining an underlying optimistic approach to that. I think you can only hope that people take your music seriously.”

While being honest with yourself is vital to nurture emotional maturity, it is also an honesty with fans that opens up a deeper connection and dialogue. “I try to be personal and not put up a front where there’s a wall between the artist and listener. Sometimes that won’t work for a specific artist, but if you’re yourself and truly making the music you want to make, people will notice that. In a time where our culture has such a short attention span, we also pay much more attention and notice a lot more detail. I feel like people are attracted to ideas that they can tell are more genuine.”

As well as inducing a shortened attention span, modern culture manages to pressurise almost anyone who takes the spotlight for their 15 minutes of fame. “The world is weird because now everyone feels like they’re in the spotlight. Social media has created this really strange thing where everyone is a celebrity, but there are a select few that transcend that, and it’s a weird pursuit of attention.” This is clearly something that impacted Sloane on a personal level, and actually led to the inspiration behind the whole concept of ‘Harmony House’.

“With this new attention on me, I started to feel like I was living in a sitcom; it’s an almost Truman Show-esque experience where there’s attention on me even when I’m just sat here in my house. It’s a weird sense that I’m now held accountable by a bunch of strangers. It’s this level of being watched – not in a dystopian way, but out of nowhere, people suddenly want to be involved. I want them to be involved, it’s great, but it’s a weird balance; how much time do I spend with the people that really know me, my family and friends, versus literal strangers? How do I balance that? I ran with this thought, and ‘Harmony House’ became the name of an imaginary sitcom.”

He continues: “I’m really interested in the social and cultural aspects of being a musician; nowadays, it’s about so much more than just making music. The music we listen to has become really personal – I try to look at the trends and try to figure out why the masses are behaving as they are. I noticed a pretty weird pattern; there are plenty of new TV shows coming out all the time, but people all gravitate towards the older ones like Friends, and the majority of the people watching are in their early twenties like me – we weren’t alive to even experience that. I’ve coined this term ‘false nostalgia’ – feeling nostalgic for a time when we weren’t even alive.”

‘False nostalgia’ is certainly an apt description of the feeling instigated not only by the album’s conception and imagery but the writing production too; the songs on this record all take clear inspiration from 80s pop, which, as a blatant member of Gen-Z, Sloane was not around to witness the birth or prime of. However, as he has hinted, this is a style that has miraculously made something of a mainstream return.

“It’s interesting to see an 80s revival going on,” he reflects. “I try to look at the songs as a producer and songwriter, and there are some from that era that are inevitably appealing and will never disappear – Whitney Houston’s ‘I Wanna Dance With Somebody’ will always be played at weddings. I’ve tried to hone in on why that is and channel that energy through my second album, so the sound is 80s-ish, but I don’t want to become an 80s impersonator either.”

Thematically, this LP has followed suit with the sonic perspective of drawing a line where the previous record stood and taking a clear step past it. “’Fuzzybrain’ was about sitting in my small hometown and waiting to grow up, ‘Harmony House’ is about suddenly experiencing all that growth really quickly. The album itself I view chronologically, from beginning to end, as a mental journey over the course of a year. I can see myself going through each step.”

As always, Sloane’s euphoric anticipation of sharing this release and, indeed, journey with fans is as infectious as the virus that has been holding it back. He exclaims: “Sonically, I wrote ‘Fuzzybrain’ all on guitar, whereas this was all on piano. I obviously have live music in mind, so I’m really excited and ready for the performance versions of these songs! I’m really proud of this album; I think it’s really different, not in a way that will make Dayglow fans leave, especially in context – so listen to the whole thing!”

In terms of any conclusive message intentionally imparted by this second chapter of Dayglow, an affirming declaration has been hidden within the closing song. “The exact ending lyrics on the record are the statement piece and the last thing I wanted to say: ‘It’s taken time to realise. Maybe I might be someone else inside your mind. I’m learning to see what it is, for what it is. I don’t have to know where I’ll be while it begins; I’m learning to grow’. I hope it helps people reflect on the things they’re going through and understand that it’s alright to not know what you’re doing – we don’t have to be in control of everything all the time. It’s all okay!”

Taken from the June 2021 edition of Dork, out now. Dayglow’s album ‘Harmony House’ is out 21st May.