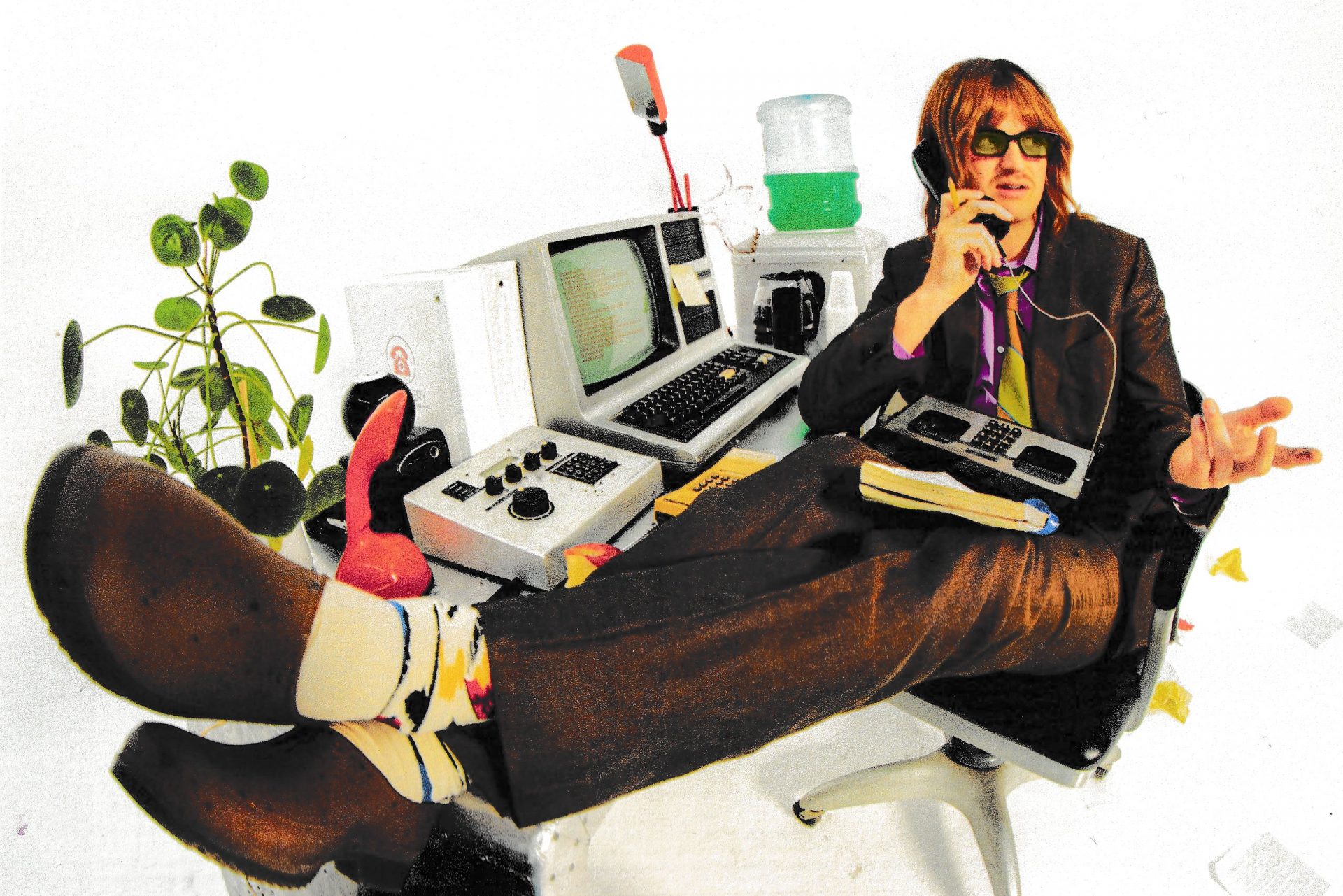 Djo: “Humour is part of my identity, in a lot of things that I do”

Embracing fun and good humour, Joe Keery’s new album under his Djo moniker is something special.

“It’s not lost on me that it’s kind of crazy.” Four days after a stellar performance in the sunshine at Lollapalooza (and a festival aftershow that saw him reunite with some of his Post Animal bandmates on stage), Joe Keery is brimming with enthusiasm for live music. The musician-slash-actor might be most easily recognisable from his portrayal of mom-of-the-year Steve Harrington in Netflix’s smash hit series Stranger Things, but when he steps out under the stage lights, he’s Djo: frontman, musician, and, uh, life coach guru?

“I was driving around, and I saw a billboard for a personal injury lawyer,” he recalls of finding inspiration for the character he poses as on stage and in his latest album promo. Decked out in a suit, shades, and scruffy wig, this alter-ego has been stirring up hype for the new record online through adverts for a hotline that offers callers “the enlightenment you need to make the decisions you deserve.” In actuality, it gives 8-bit previews of songs from his brand-new record. “I just thought that was an interesting way to tie this whole thing together,” Joe explains.

This on-stage/online character, he admits, started out as a diversion, a way to make his music unrecognisable from the characters he plays on TV and in films. “It was trying to avoid, like, ‘yo, that’s Steve Harrington!’” he laughs. Now, it’s another way he can be creative, adapting and evolving the way he presents himself and his music online and on stage. Simply put, a way to have fun. “I now realise that if people are coming from the TV show, and that’s the reason that they’re finding out about the music? Hell yeah, that’s really cool.”

It’s something his fans connect with, too, whether by relishing in other people’s confusion when they question the wig and realise who’s wearing it or by dressing up as Djo themselves. “We played in Alabama earlier this year, and some kids showed up all dressed as the character,” Joe exclaims. “It was one of the coolest things that I’ve ever seen! It’s kind of freeing for me, in a way,” he states. “There is something sort of odd and peculiar about it. If that connects with people? That’s amazing.”

In conversation, Joe’s admiration for his fans is a near-tangible thing. Recalling his awe of the crowd during his performance at Lollapalooza, his appreciation for his audience is boundless. “It has far surpassed anything that I would have expected,” he comments on the reaction to his musical output so far. “I feel like you hear a lot of musicians saying things like, ‘yeah, the song kind of stopped belonging to me after I released it’,” he details. “I didn’t really understand, honestly, maybe until recently.”

“Playing some of these larger festivals and hearing people who know the words to these songs you wrote in your bedroom… It does give you the sense that they have really taken on their own life, and they really mean something to people other than yourself. And that’s just…” He trails off, searching for words that can sum up how it makes him feel. “That’s unbelievable.”

As he releases his second record, ‘Decide’, his only hope is that his music and his songs continue to connect – and that he can continue to create new music that does more of that. “I really enjoyed the first record that I made, but I’m the type of person who’s never fully satisfied with what they’ve done,” he describes. “My goal was just to make something that was way better.”

Sure, that goal might be subjective, but we don’t think anyone will argue with us when we say that with ‘Decide’, we’re treated to the sound of Joe Keery in his musical element. “My big takeaway from playing shows with the old stuff in 2019 [was that] I wrote and recorded that stuff in my bedroom, and it sounded like that live,” he conveys. “I wanted to scale up the whole thing and go for a larger sound.”

That’s precisely what he’s done. From the rapid synth ripples of ‘Runner’, through the cinematic chorus cries of ‘End Of Beginning’, and beyond, this is Djo at his biggest, boldest, and brightest yet. It’s an album about growing up and getting on, and while its topics might not look like the most toe-tapping and/or hip-shaking on paper, it’s an album purpose-built to cut loose and dance to. “Making something that people could move to – that was important to me,” Joe states.

Cue ‘Gloom’, a two-minute stuttering synth ode to feeling over it and moving on that’s every bit as chaotic as it is cathartic. “I can’t think of any other song where one of the lyrics is about your girlfriend having bad breath…” Joe contemplates, laughing. “If that means it hasn’t been done before, that’s cool.” The song presents itself with a playful energy that’s become somewhat synonymous with Djo’s music. “I realised halfway through recording that maybe humour is part of my identity, in a lot of things that I do,” he states. “Why shy away from that? Why not embrace that?”

When he cites Paul McCartney (“he takes you on these journeys but he’s always able to bring you back home”) and Charli XCX (“she’s serving up this candy pop music, but lyrically and production-wise she’s making it her own in a way that’s really unique”) as major influences, it should come as no surprise that ‘Decide’ is as eclectic as it is electric. Driven by a desire to create “better” after debut ‘Twenty Twenty’, this record was shaped just as much by lessons he learned before his debut, during his time in Post Animal.

“They opened my eyes to [the idea] that songwriting doesn’t have to just be ‘verse, chorus, verse, chorus, bridge, close the song’, y’know?” Joe asserts. This isn’t to say he’s against that approach (album centrepiece ‘End Of Beginning’ has perhaps the most simple structure on the record and feels all the more epic for it). It’s simply that this is the music that excites him the most. “When I find myself enjoying art, I generally find that’s because it’s surprising,” he details. “Sometimes deviating from a traditional form can do that.”

Taking this approach to his songwriting, each song on ‘Decide’ became its own adventure. ‘On And On’ meanders from swaggering through monotony to stratospheric enlightenment and back again. ‘Go For It’ travels from gnarly synths through aching romance into a deliciously frenzied dance party. ‘Half Life’ could be six songs in one. Yet somehow, it’s all cohesive and all characteristically Djo. “It’s being able to straddle that blend of being avant-garde or being artistic, and blending that with the commercial,” he says.

The process for writing this record was largely the same as writing his debut – collaborating again with musician/engineer Adam Thein – but one thing that did change was the decision to put more conscious focus into his lyrics. “I’m the sort of person who mostly listens for melody and drums and rhythm,” Joe states. “Coming from a production background, that’s what I like. But my girlfriend is always listening to the lyrics, and she got me a little bit more invested in that.”

Taking an open approach to his songwriting, ‘Decide’ is a document of the past few years of Joe’s life. Being honest in his lyrics and putting his own experiences into his songs might sound intimidating, but for him, it comes naturally. “I actually love that part about music,” he enthuses. “I feel like that’s one of the reasons why acting and music really feed off of each other, for me personally.”

“In acting, I can just be one part of this larger thing,” he continues. “It’s through my own experiences, but the words that you’re saying and your performance is edited and crafted by the directors and editors and showrunners. Whereas in music, you can really take control and see a project through from beginning to end.” It seems like something of a contrast in approach, given that he takes to the live stage in disguise, but all of it is a part of not just being creative with his own experiences and influences, but having fun with them too.

“It’s cathartic for me to be able to write about things that are going on in my life,” he conveys. “I think I’m a lot more cryptic to myself day to day than I realise. Only with perspective can I look back with any sort of opinion and realise what I was going through.” It’s now, through releasing this music into the world, through performing these songs live and sharing them with others, that his understanding of what he’s created takes full shape.

“It was a pretty depressing time to be a citizen of the world,” he reflects of the near-three-years spent writing this record. “I feel like there isn’t a lot to be hopeful for sometimes.” It’s a mood felt a lot over the past few years, a mood still felt now. Consequently, it’s a mood he feels running through a lot of these new songs. “In some ways, it’s really pessimistic, this record,” he sums up. That said, it’s not all doom and gloom, far from it. The record presents itself with brightness and hopefulness too. These aren’t contrasting emotions, but two sides of the same coin.

“Maybe the same thing could be said of any piece of art,” he contemplates. “You can look at it in a glass half-full or glass half-empty sort of way. And it changes day to day. That’s not something that’s going to stay consistent.” Right now, however, with the album release imminent, the feeling surrounding these songs is easy to pin down: excitement.

“It’s unbelievable,” Joe enthuses, “to feel like people are invested in it and excited for it and looking forward to it? That’s the only thing that I really wanted at all.” Much like his enthusiasm, his gratitude toward his fans knows no bounds. “I owe them everything,” he states. “They’re the people who are listening to it and finding some sort of thing they connect to within it.” As for him? He’s happy taking the time to appreciate the moment. “It’s like a dream come true for me.”  ■

Taken from the October 2022 edition of Dork. Djo’s album ‘Decide’ is out 16th September.