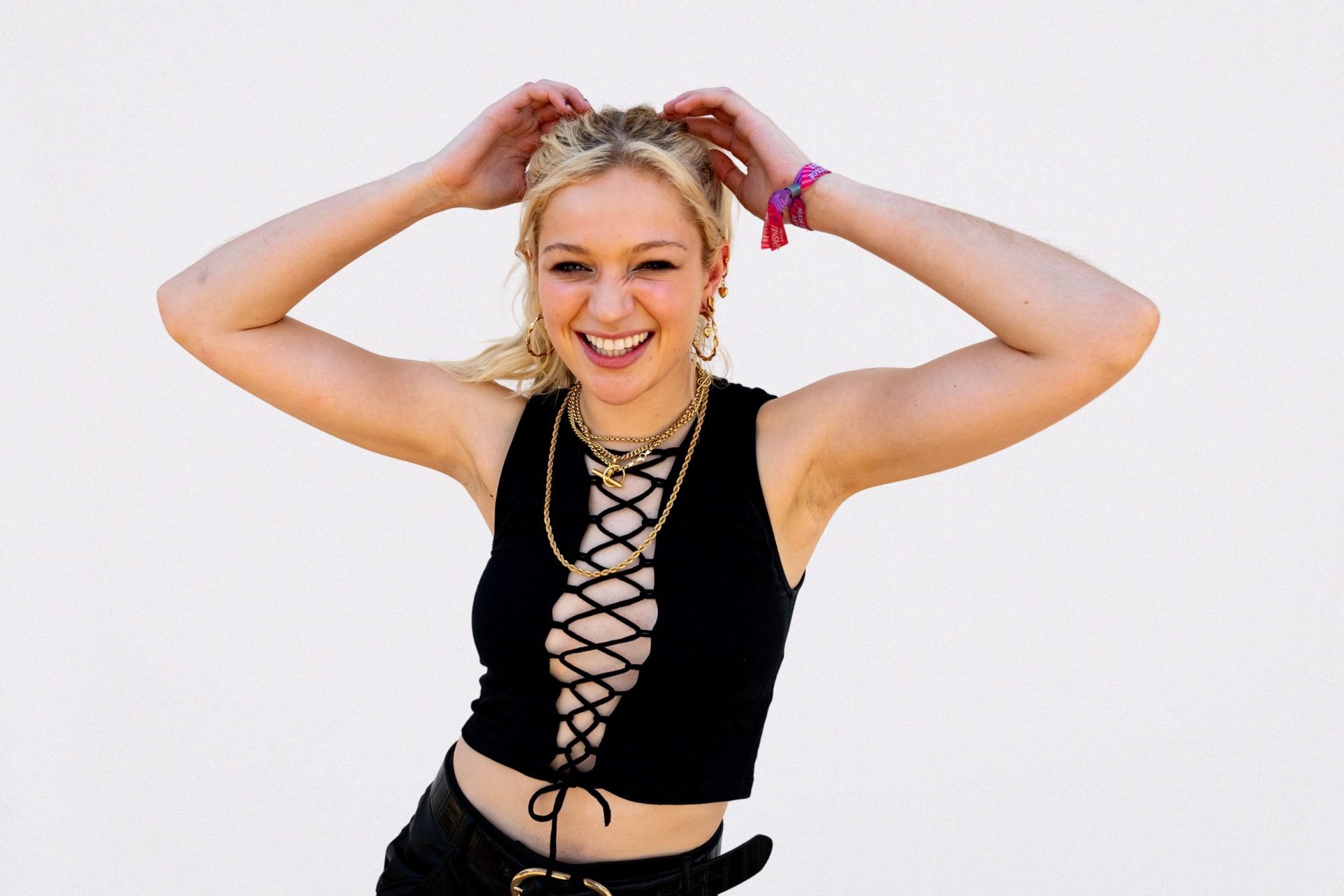 Rock star, pop star and her own biggest fan: Dylan is impossible not to get on board with.

“It’s been one hell of a few months,” says Dylan. It’s perhaps the biggest understatement of the year. Today we’re sat backstage at Latitude festival, ahead of a main stage performance that’s cool, comfortable and full of snarling ambition. Last night, she was performing in Brussels, supporting Ed Sheeran on a stadium run and after one day at home, she’ll be flying off to America for shows in New York, Chicago and LA. Then it’s back to Europe for more shows supporting Ed and a pair of blistering performances at Reading & Leeds Festivals. There’s a UK headline run planned for November that’s so sold out, Dylan has already announced a gig at London’s Shepherd’s Bush Empire for February 2023. That too is already sold out. “I feel like a proper rock star. I love it,” she grins. “I mean, I’m very tired but I can survive on no sleep.”

“I feel like my show suits big stages,” the 22-year-old continues. Her music is a bold blend of classic rock and the sort of relatable storytelling that’s made stars of Taylor Swift, Phoebe Bridgers and Holly Humberstone. “It just feels better in front of more people.”

Still, today she’s feeling terrified. Latitude is “the only festival I’ve ever been to. My dad’s been bringing me here since I was nine and this is where I discovered all the music I’m obsessed with.” In 2017, she resorted to the ol’ shewee and cup trick to ensure a good spot for The 1975 and she’s also had a relationship end in front of the main stage. “I can’t wait to talk about it onstage,” she grins. “I’m hoping he turns up, because I know he lives close by.”

Catching up with Dork backstage at Reading, Dylan still doesn’t know if her ex caught her mainstage ‘fuck you’ but at the rate her star is rising, he can’t stay ignorant for long.

New mixtape ‘The Greatest Thing I’ll Never Learn’ is out in October and is about “learning to love and be loved. “How does anyone love and be loved,” Dylan asks. “It’s cringy, but the songs are so un-cringy that it’s very easy to take in without icking myself out. But I feel like I’m writing a soundtrack to my life. This is my movie soundtrack.”

“It’s got more texture to it, than what’s come before,” she tells Dork. “Because an EP like ‘No Romeo’ is just 6 songs, it’s got to be in your face. Bang, bang, bang, bang, bang, bang.” She says the tracks on the mixtape are still “massive, but there’s some more heartfelt songs, some more personal songs and more rocking songs. There’s so much more freedom when you have a bigger body of work. I get to say so much more about myself rather than just trying to catch people’s eye. The live show is going to be ridiculous though,” she adds with a grin.

Dylan says she’s “enjoying” how fast things seem to be happening. “I’ve been really good at taking it day-by-day, rather than trying to chase things.” Latitude is the third festival of the season for Dylan, and all of them have been on the biggest stage possible. She did ask her team “surely there’s meant to be a stepping stone” but she’s learnt to trust the process. “All I can do is just go and be a rock star.”

She says touring with Tate McRae, Yungblud and Thomas Headon was “quite easy because that’s very much my audience”. It was harder supporting the likes of Bastille and Ed because “they speak to such a range of people. I’ve had to work out how to connect to people, even if they don’t know my songs.”

And what songs they are. The title track to her ‘No Romeo’ EP is a shimmering hunk of pop rock, the viral ‘You’re Not Harry Styles’ is frantic, polished punk while ‘Nineteen’ is an expansive, nostalgic track that rebels against coming-of age. Then there’s the recent single ‘Girl Of Your Dreams’ which feels like the start of a new era. “It’s getting rockier, but in a nice pop way,” explains Dylan.

Musically, ‘Girl Of Your Dreams’ takes influence from Yungblud “because watching his show, there’s something so spectacular about it. He’s everywhere all at once and I wanted something with that energy,” while the track tells the real-life story of a first date that didn’t go quite to plan.

“Well, I thought it was a date until all his mates turned up. Thank God I didn’t say anything. That experience really threw me in the dirt though. I was asking myself ‘why does he have zero interest in me?’ so the next day, I went into the studio to write a song that would convince him otherwise,” Dylan explains before laughing. “It didn’t work. but I got a song out of it, so it’s ok.”

Nowadays Dylan blends AC/DC’s rock swagger with Taylor Swift’s pop sensibilities, but her earlier material tackles everything from atmospheric synth pop (‘Bad Bitches Beat Heartbreak’) to haunting electronica (‘Good Enough). “I was just in denial for a really long time, trying to be someone completely different,” she admits. “My first two EPs (2019’s ‘Purple’ and 2020’s ‘Red’) bless them, but I was not myself. I was too busy trying to be everyone else. I thought I knew it all but it was horrific, which is why none of it works.”

Lockdown proved “I knew nothing” and she got to a point where couldn’t carry on. “I can’t exhaust myself trying to be everyone,” she realised. “I’m just going to have to write like I would if I was 16 again. That helped me find my sound, which is marrying big pop storytelling with rock and roll. It was actually pretty easy. I’m just a massive wannabe rockstar who can only write pop songs. “

Still, those early EPs are still on Spotify. “It’s nice for people to see the journey. I’m not ashamed of them even if I don’t necessarily enjoy the songs as much as I do the ones I’m writing now. I’ve accepted them as part of my story though,” she says before looking to the future. “Seriously, the songs I’m writing now, I listen to them every day and I just don’t get bored of them. It’s hilarious, I’m my own biggest fan.”

“I want to have the relatability of someone like Taylor, with the coolness of someone like Billie Eilish but with the live show of AC/DC,” Dylan says of what sort of artist she wants to be. “I want to bring all of the things that I love so much about all of my favourite artists into one project. But everyone inspires me, really. My playlists are bonkers but I’m trying to not put too many restrictions on my music, because I want it to be natural. I want it to be me, I don’t want to fall into the same trap I did when I was 18 and started writing what I thought other people wanted from me.”

Dylan’s coming through at a time where rock and pop has never been more entwined, thanks to artists like Olivia Rodrigo and Billie. “It’s so nice to see because it’s the music that I absolutely love. I think they’re both brilliant. Also, seeing women doing it is really great. It kind of makes it okay for the rest of us. All I’ve ever wanted to do is play guitar onstage, busting out knee slides and doing all of my sexy guitar stuff.”

When Dylan was a kid, her dad used to stand her on the kitchen table and get her to practise screaming “Hello Wembley” before she sang ‘Since You’ve Been Gone’ by Rainbow. Earlier this year, she got to scream “Hello Wembley” for real, supporting Ed.  “Once you’ve had a taste of it, you can’t not want it,” she admits, saying playing Wembley has always been the dream. “That is where I want to get to. Obviously there’s lots of little goals in between but yeah, I think the music that I make belongs in stadiums, so that’s what I’m going to aim for.

Does that lofty goal feel achievable though? “You know what, it really does. I believe I can do it.”

Still, there’s one downside to success that Dylan hasn’t considered just yet. See, her breakout track ‘You’re Not Harry Styles’ isn’t exactly subtle in how she feels about the pop megastar. What happens when they cross paths?

“Well, the song isn’t about him. It’s just saying the person it is about, isn’t as good as Harry Styles. It’s a massive complement, really,” Dylan starts, getting her defence in order before revealing that one of his childhood friends actually shared the song via Instagram Stories recently, meaning there’s a very good chance Harry is already aware of the track. “I don’t know how to feel about that,” admits Dylan. “Before I wrote that song, I used to think that if me and Harry ever met, I’d play it really cool, really serious, we’d talk about music and then maybe he’d fall in love with me,” she continues, very much an open book. “That’s fucked now, isn’t it?”

Taken from the October 2022 edition of Dork. Dylan’s new mixtape ‘The Greatest Thing I’ll Never Learn’ is out 28th October.