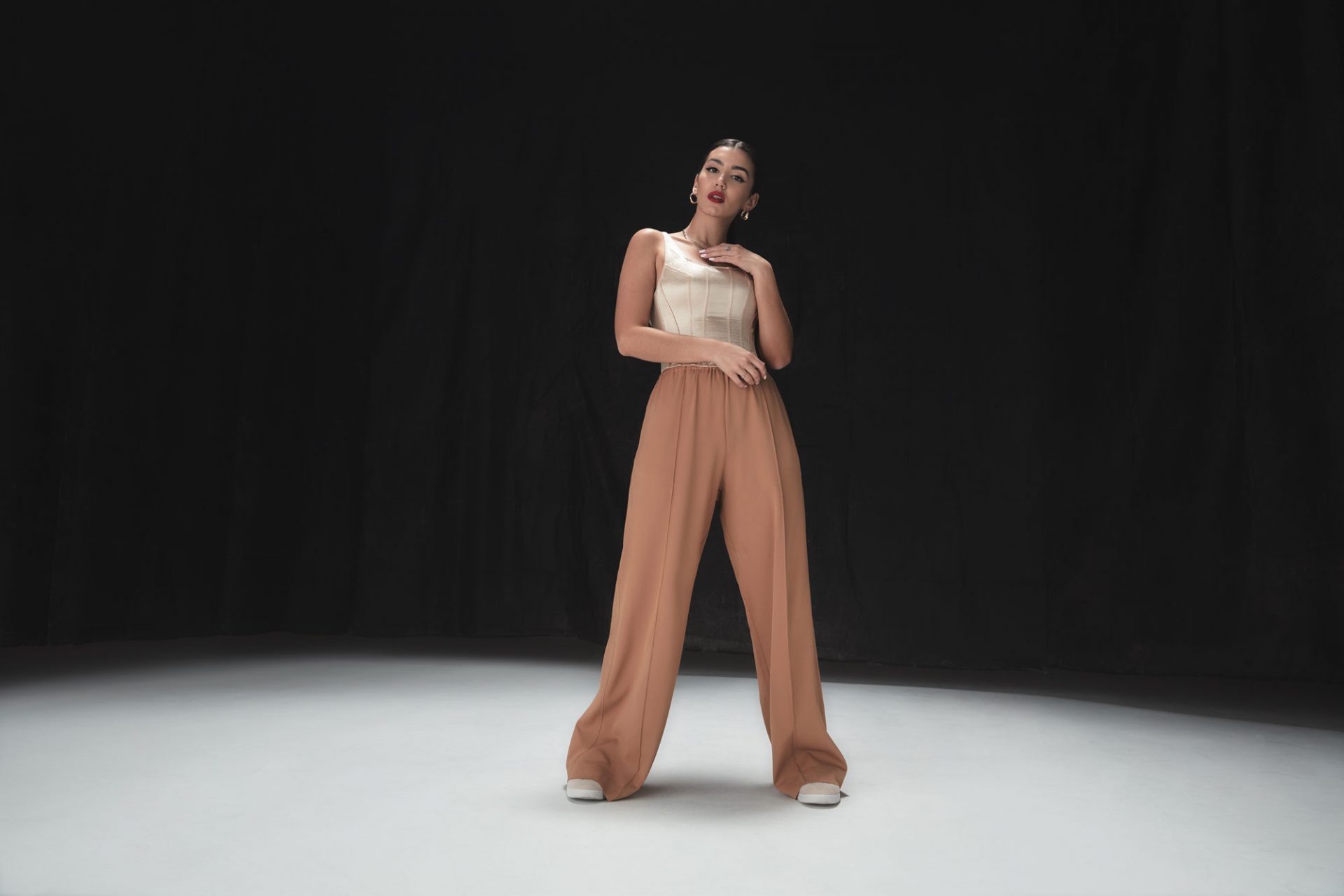 Gracey: “It got to a point where I wasn’t speaking unless I was writing a song”

Having joined pop-writing-phenomenons Xenomania at the teeny-tiny age of 16, Gracey has always been set for superstardom.

“2019 was a real hard year for me, so 2020 felt like a breeze!” Gracey kicked off her career with every musician’s nightmare; losing her voice.

Shortly after releasing her debut single ‘Different Things’ in 2019, she underwent surgery to remove nodules on her vocal folds (yikes) and ended up taking her own mini, personal lockdown.

“It’s not the most ideal situation when you’ve just signed to a label, you’ve just put your first single out, and it’s got a great response, and you’re feeling happy and living the dream, and then you have to go have your voice operated on,” she says from her bedroom, where she now resides in national lockdown just like the rest of the UK.

Gracey – born Grace Barker in Haywards Heath – got vocal nodules from simply working too hard. Plucked from obscurity at 16 and thrust into the pop world, she’s worked non stop ever since. Signing a publishing deal with Xenomania(!!) fresh out of school (the BRIT school!! She took musical theatre while Rex Orange County and Raye did music down the hall), music has been her life for a long time, so it’s no surprise singing took its toll.

“I’d basically been writing and singing at every opportunity I had when I was like 18 to 20, and I just used my voice really in the wrong way. I had to completely retrain my voice which I spent the whole of the year before doing, trying to salvage my voice. Then I was in LA, and I have the mindset that if you go away, you’ve gotta grind and do as many sessions as you can to try and get like the most out of the trips, but it got to a point where I wasn’t speaking unless I was writing a song, or singing a song, and it just made me like, well depressed, and it was the worst.”

Thankfully, she wasn’t held back too long, releasing a steady stream of singles in 2019 that’d make up the ‘Imposter Syndrome’ EP, as well as collaboration with fellow newcomer 220 KID ‘Don’t Need Love’, which would go on to hit the Top 10 in April 2020, a pleasant surprise during lockdown.

“I still find it really mental when I hear my music on the radio because obviously as a kid you’re just like *gasp*,” she says, making a shocked face. “I think with everyone being in lockdown, maybe like all of the other artists just didn’t release their songs yet, and we just like snuck through and got lucky I guess.”

Maybe, but it’s more like the fact it’s a huge dancefloor banger (hitting the radio at a time when everyone and their dog needed a proper pick me up), and is anchored by Gracey’s history of writing big bops for various chart-toppers. Her penmanship can be found on tracks by Raye, Rita Ora, and Olly Murs amongst countless others, thanks to her time at Xenomania. She says, “Every melody that’s ever come out my head is probably on that computer. Sometimes I just get an email being like, ‘Oh, this song’s come out, and you did that when you were 16. You did the two lines of the pre-chorus, so you’ve got a cut on that’. Right? Cool.”

Working at the pop factory responsible for endless hits for the likes of Kylie Minogue, Girls Aloud, Sugababes, Pet Shop Boys, and Cher (TO NAME A FEW), taught her a thing or two about songwriting. While she says she wasn’t allowed near the lyrics (“I don’t think they wanted any more GCSE concepts”), she worked on melodies, after sneaking her way in through a girl band audition that she turned down to be a songwriter.

“It was a very odd first job. They have a whole team of people, and they would all do a separate part of the song. So if one, two, three writers did the melody on the track, and then they’d give it to another team of people that would do like lyrics and do a couple of lines each and then they’d give it to another person who would chop it up and rewrite the whole thing. To me, that being the first thing that you learn at 16 was just a bit of a trip.

“Now I just go into a room with like, a producer or even I’ll just like, sit on my own and write by myself. So it was a weird introduction to the music industry but still quite thankful for it because I think it made me better at melodies for sure.”

Her latest single ‘99%’ was one of the first songs she wrote, and the one she’d build her own sound off after writing for other artists. “It was almost like a pillar for my projects. I used to go into sessions that I would put aside for writing for myself, and ‘99%’ was one of the songs that I would like play, so the first couple of singles I released were probably due to the people I was working with being inspired by those sounds. It’s really mad that it’s out now.”

“When you write a song and you find it really hard to imagine someone else singing it, that’s when you know it’s time to give it a go as an artist”

So Gracey The Artist’s journey started with ‘99%’, and along the way, she found inspiration in other alt-pop artists like Sia and Lorde.

“’99%’ was kind of a moment where I could imagine where I would sit as an artist, and I think that came from other artists. I remember listening to ‘Chandelier’ by Sia when I was revising for my GCSEs, and I was like, oh, this girl is really cool because it’s kind of dark, weird pop, and love huge choruses as well. And then Lorde was another one, ‘Pure Heroine’ is one of my favourite ever albums, ‘Melodrama’ as well to be honest. I was inspired by other amazing female artists that came about around the time I was writing, and then I just fell into it. When you write a song and you find it really hard to imagine someone else singing it, that’s when you know it’s time to give it a go as an artist.”

The song appears on her mini-album (EP) ‘The Art Of Closure’, released late 2020; seven tracks that give us a peek into Gracey’s brand of sadbanger. Also featured are ‘Empty Love’ a duet with Australian singer-songwriter Ruel that was written about the social media rut she got into during her post-vocal-surgery downtime, disco-infused Alexander 23 pair-up ‘Like That’, and breakup anthems ‘Alone In My Room’ and ‘Don’t’.

Sadly, she’s not been able to get out and perform any of it properly yet, what with taking 2019 off for a vocal rest and 2020 for, err everything else rest. She did squeeze in one show at London’s Laylow early last year before having to resort to livestream performances and socially distanced gigs for the rest of 2020.

“It was small, but it was like really crazy to even see those people like reacting to my song,” she says of the gig. “I think we all get really caught up with follower counts and how many likes and this that, and the other and you forget that the number of likes is actually humans.”

For now, she’ll be working on some more music in her room and on Zoom, and hoping the universe isn’t against her for the third year running. There are bops on the way – she says she wants to get us all dancing, even if it’s just in the kitchen, so watch out Sophie Ellis-Bextor – as well as some sad slowburners too.

“Obviously 2019 I didn’t get the chance to fully go for it, and last year, I felt like I kind of grew into the artist that I was wanting to be so, I’m just exploring that little bit more. I’ve got a couple of like collaborations coming as well which I’m really excited about. So just kind of evolving into the next stage of my life.”

Taken from the March 2021 edition of Dork, out now.

Courting are this week’s special guests on Down With Boring