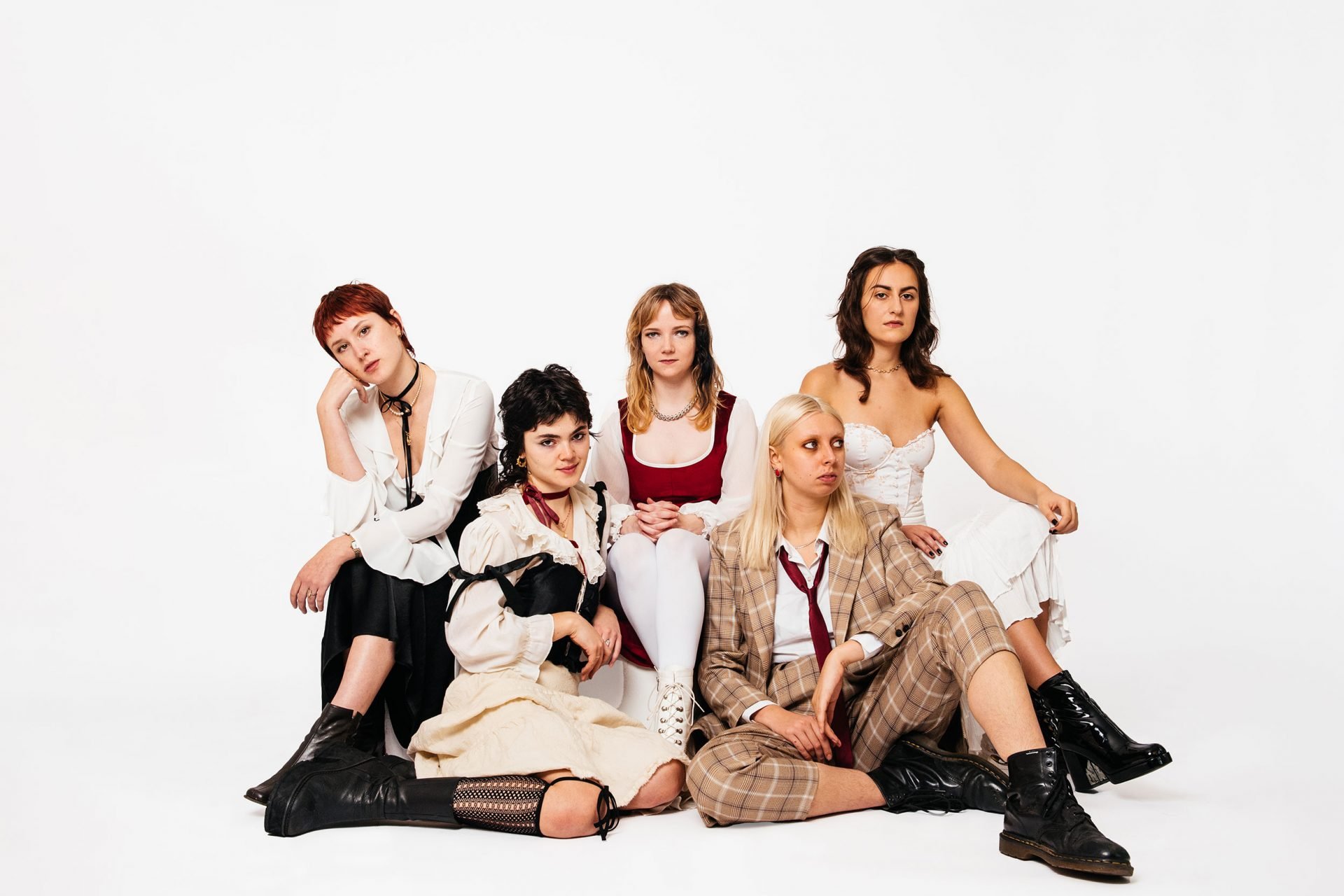 Hype List 2023: The Dinner Party: “I’m excited to see what the songs become when we get into the studio”

The band who haven’t even released a single yet, but will blow your mind.

There’s little more exciting than being there at the start of something special. Seeing those early steps from a band that will soon be the talk of the music world. A phenomenon-in-waiting that will evoke bragging rights for those lucky enough to catch on before everyone else. With no songs released, just over a year of live shows behind them, and only a tiny pocket of information online, that band is The Dinner Party. Otherwise known as your next favourite band.

Looking back on 12 months that have sowed the seeds for the glorious blossom about to come, Abigail, Georgia, Lizzie, Emily, and Aurora are reflecting on just that. “I don’t think any of us expected to be in the position we are in right now,” beams bassist Georgia. “It’s been the best year ever. It’s quite an old-school way of doing it, just word of mouth travelling about before we’ve even released a song. We’re such fans of music and the London music scene, and we’d always observe the bands we were most excited about were the ones you’d hear whispers about from friends of friends.”

“Yeah,” adds singer Abigail. “Rather than you put out music, nobody knows who you are, people find you online and then come to a gig after knowing you – it feels more organic and fun to start as a live band, and I think that’s what we’ve not only really missed but also something we wanted to do.”

With mystery and intrigue around their every step, The Dinner Party have become a mainstay of the London music scene. Their appearances through the year – whether supporting the likes of Walt Disco, headlining shows at famed haunts such as The Windmill in Brixton or roadblock shows at new music festivals – are the stuff of legend. Melding together a range of styles from new-wave and swaggering glam-pop to soaring pop and choppy punk undertones, the result is a band arriving to stage and immediately sounding like nobody else going right now.

“It’s quite an old-school way of doing it, just word of mouth”

It’s an excitement that bursts from the band themselves as they reflect on a year far surpassing anything they thought possible. “I think from the beginning all we wanted, and our priority, was to play live as much as possible,” lays out Abigail. “We didn’t want to record or put music out; we just wanted to gig as much as possible and have that be what we were about. That was where all the fun and the passion was. Honestly, our goal started out just to play The Windmill!”

It’s understandable why live music sits at their core when you trace how The Dinner Party came to be. Three friends from university, Abigail, Georgia and guitarist Lizzie, alongside keyboardist Aurora and guitarist Emily, forged their bond within the live London music scene, spurring on inspiration with their own creative passions. “Our friendship was consolidated there,” explains Abigail. “It was going to The Windmill every week. Being in that energy after lockdown, it really blossomed from there.”

With all or most of the band still at university at the time, they quickly locked together to form the sort of bond impossible to break. Early tracks written by Abigail acted as a basis for the vision they all shared. “It’s always had a very clear aesthetic, right from the music that Abi was writing back in the day. It definitely has a world to it that I feel like we can all find a home in. We all bring our own style to it when we’re playing onstage, and coming towards the album we’ve been able to open that up even more. It’s expansive enough that we can all have a place in it.”

“We’d come up with the name The Dinner Party ages ago before we’d even rehearsed or anything,” explains Georgia. “I think that’s a really good representation of what we are. It’s people coming together and discussing both aesthetically and philosophically, with everyone having a seat at the table. This big debaucherous Dinner Party!”

“I mean, we do LOVE to drink,” cracks Abigail.

From the very beginning, all eyes have been on The Dinner Party. Their live shows have become exactly that – a communal release of jaw-dropping energy and hits ready to be sung back at the highest volume. The response has proven just how big things are about to get. “The response just really amazed me,” admits Emily. “I’ve been in lots of bands previously with just like no success at all, so it was amazing and weird to suddenly experience people starting to notice us and wanting to come to our shows – like, what is this about?!”

When a couple of their shows were filmed and uploaded online, attention grew even more. “We’ve always wanted to be the band that we didn’t have as teenage girls,” lays out Georgia. “We always idolised musicians and were obsessed with music our whole lives but also wanted to be a band that I feel like there was a blank space for.”

With 2022 bringing plenty of live moments, the word-of-mouth nods now look to those opening statements of music. Releasing that music after such a year is set to be one of the first great moments of 2023. “It feels like it’s about time to put something out,” admits Aurora, “but how is that going to exist in relation to this live thing that we’ve created? There are definitely some nerves there, but also excitement. It’s a different beast.”

“I’m excited to see what the songs become when we get into the studio,” continues Lizzie. “When we have them fully produced and made all nice and shiny, but also hopefully if it goes well and it gets some traction, I think it’ll just be so cool to see where we are in a year’s time. I just want to hear people singing the words. I’m so excited for that first gig once the music is out where we’ll get a good four people singing the words to the choruses, haha.”

As the conversation turns to whether they actually already have had a singalong (courtesy of Georgia’s brothers at Live At Leeds and their waving arms as Abigail demonstrates), one thing is certain: The Dinner Party aren’t just here to steal the live show world. They’re here for something greater. Some bands are here to fit nicely into people’s music libraries and gig diaries, but The Dinner Party have the power to be so much more.

It’s something Abigail outlines when thinking about what’s to come for them. “Personally, the thing I’m most excited about when it comes to putting music out is the opportunity to reach people. There’s only a certain amount of people you can reach at a show because we play shows where you can’t get in unless you’re over 18 or something. What I’m really excited about is being a band for younger people, all ages, of course, but I want to reach 13-year-old girls in their bedrooms who are miserable. That first time in your life when you start to really choose what music you listen to and connect to a vision and a song. That’s my ambition, to reach those people and have some kind of effect on making people feel part of something and feel inspired.”

Call them London’s best-kept secret or the greatest new band you may not have heard of – one thing is for certain. The Dinner Party are taking over. The stage is theirs. ■