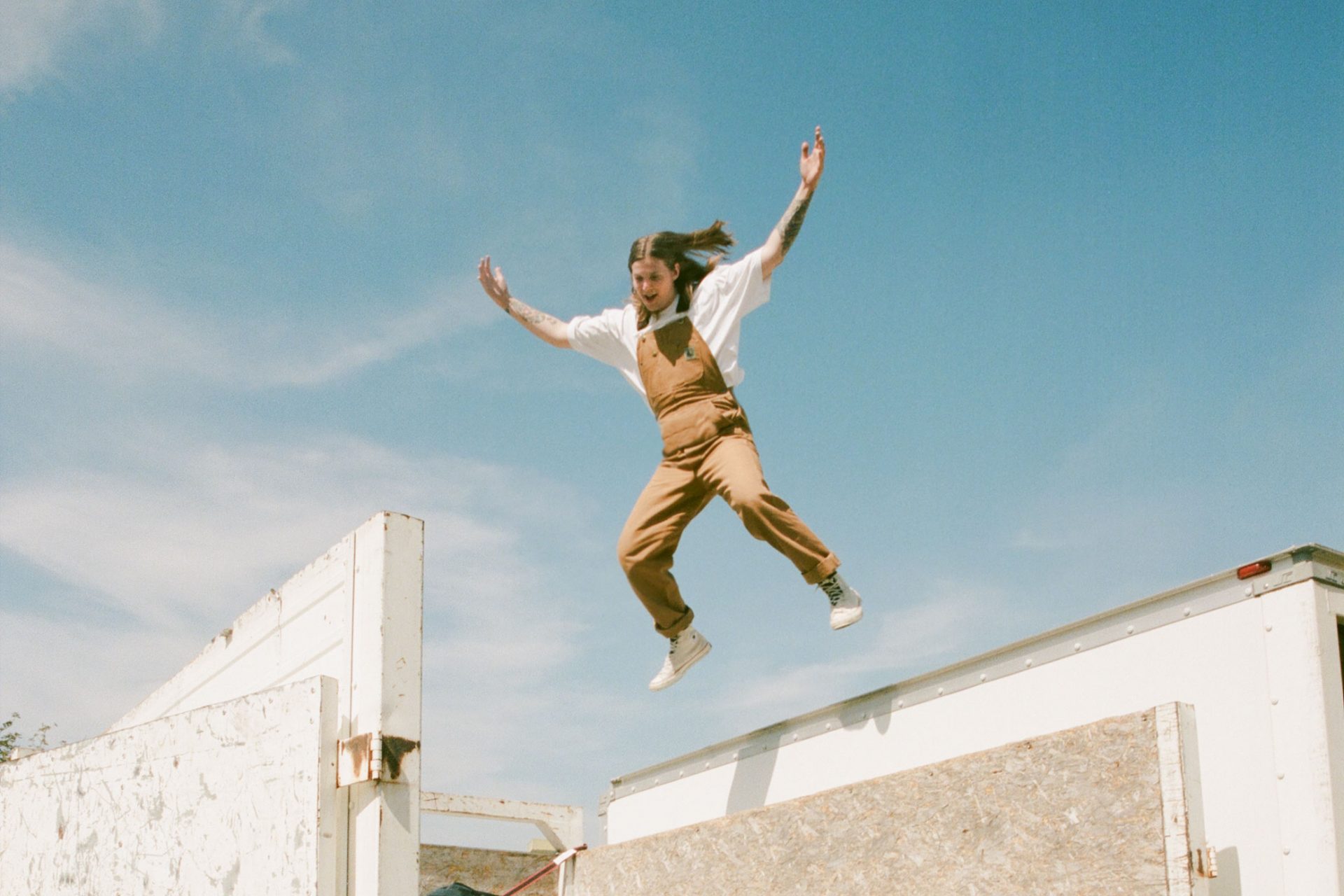 Jawny: “I don’t want to be the hottest flavour of the month”

Quirky pop maverick Jawny is following up last year’s standout ‘For Abby’ project with ‘The Story Of Hugo’, one of the most inventive and fun-packed EPs you’ll hear all summer. He doesn’t do boring.

Jawny is a man with incredible levels of self-belief. In fact, his levels of self-confidence are so strong that the last time he spoke to Dork he managed to convince us that he was 6ft 9 tall. A giant of pop. Now, we suspect that might not be entirely accurate, but who cares? Jawny believes it, and that’s all that counts. He’s got good reason to be so confident, though. The man who formerly went under the name Johnny Utah and is now making earworm bedroom pop bangers for fun as Jawny has come on quite a way since he emerged from producer obscurity to bona fide alt-pop sensation, and he’s ready to show us just exactly what he can do on his latest project, ‘The Story Of Hugo’.

The confidence to (literally) big himself up hasn’t always come so easily to Jawny, though. Instead, his rise has been a gradual one as he tinkered around with his sound to find something that sticks. Rather than one sound, though, he found that everything sticks. Jawny’s vibe is an eclectic mashup of all sorts of vibrant stuff. “It’s always changing and evolving over time,” he says about his sonic approach down the line from sunny Los Angeles, California. “I feel like in the last year, I’ve come into my own where I’m finally comfortable with who I am,” he continues. “I know who I am as an artist, and I don’t feel I have to be anybody else. I don’t feel like I’m in a competition or fighting for a spot. I’m comfortable and confident in making the best kind of music that I want to make.” This newfound self-assurance is in stark contrast to an earlier period of doubt. “There were a couple of years back when it wasn’t like that,” he remembers. “I felt like I was clawing my way for a spot or constantly trying to be the best or prove that I belonged here. More recently, I’ve felt more comfortable in my skin and my shoes as an artist. That was a huge thing for me personally.”

It’s easy to get fixated on short term hype, but Jawny is determined to carve out his own legacy. “I want longevity,” he explains. “I want to be releasing music that people care about. I don’t want to be the hottest flavour of the month, then everyone forgets about me. I’d rather build a dedicated fanbase from people who genuinely care about what I do and still be going strong and providing for myself and my family.”

He cites artists who have followed their own distinct path and repeatedly bucked expectations like Beck and Tyler, The Creator. “I admire people who are experimental and diverse,” he says. “These are all people I try to base myself on in terms of how I can develop in 6 or 7 years rather than just now.”

“I admire people who are experimental and diverse”

That forward-thinking attitude is central to everything Jawny does. He’s not afraid to take risks and just settle for the easy path to success. “I never close a door to anything in my head,” he explains. “I did do that a little bit previously, though when I had a song called ‘Honey Pie’ just go cuckoo bananas at one point around the world. I did have a small period of time where I felt that I’d closed all these doors in my head and thought, well, this is what I have to be, I guess. This is what people like, and this is what people have resonated with.”

Shortly after ‘Honey Pie’’s gargantuan success, Jawny had a realisation that now defines his career. “I had a conversation with myself about how stupid that is,” he continues. “I need to keep all the doors open. If I want to make a country song, then make a country song. People are only going to enjoy your music if you also enjoy your music. If you try to sell them something that you’re not into, then no one is going to connect to it. That’s the beauty of music. You can feel if the artist really means what they say. It’s the best way to compile everything and compile different genres, and not stick to the same thing. You need to make whatever you want to make and not give yourself a glass ceiling.”

Jawny is a storyteller, and all his songs and projects are thematically linked in some way. This time ‘The Story Of Hugo’ immediately follows last year’s ‘For Abby’ EP. “That was a concept piece where you’re led to believe that a boy and a girl went through a really bad break up, and he’s making her some crummy mixtape to try to win her back,” he says about his previous release. “When I was having conversations with myself about whether I want to go into full album mode right now, I felt like I still wanted to continue the narrative of the EP a little bit. I didn’t want to write a whole album about it, but I felt like there were still some pieces of that universe to tackle. I didn’t want to finish the story, but I didn’t want to extend it. The boy’s name in that story is Hugo, and if you listen to both EPs, it all ties in with each other, and it’s one through-line narrative. Hugo is the dude who is making the mixtape for Abby.”

‘Hugo’ contains some of Jawny’s best work yet, from the tropical pop bop of ‘Best Thing’ to the riotous punky thrash of ‘Take It Back’. His output sounds like it might be chaotic, but he really thinks about how it all works and how his stories weave together. “I feel like I have to make everything make sense,” he says. “It’s something that I always want to remain self-aware of, so that I’m giving people the sense when they listen that thought went into this. This isn’t just some packaged bullshit that they’re feeding me. I hope that that shines through.”

There are lots of things that shine through when you speak to Jawny. His restless exuberance. His joy for the art of making music and creating concepts, and his desire to constantly experiment. He’s doing what he loves and having the time of his life doing it. “All I’ve ever wanted to be since I was a kid was an artist. I used to buy Green Day live DVDs, and the DVD of Good Charlotte live at Brixton Academy,” he laughs. “I used to live by them every day. I would watch them over and over. When you turn 13, though, the world makes you become a realist, and you think only one in a million will get signed to a label and do that kind of stuff, so maybe you should have a more realistic goal, so you move off of it for a few years. From 13 to 20, I was just finding all the stuff in life that made me fucking miserable. I was like, why am I not doing the thing I always wanted to do? When it happens, it’s so weird to look back and think this is all I ever wanted to do, and now I’m doing it. It freaks you out. It’s like a simulation glitch. Not a lot of people get that pleasure.”

This latest EP is a landmark moment in Jawny’s rise. A real statement of intent before he prepares to embark on the full album process. “The best thing was having the freedom in myself to just give true artistic expression,” he beams. “I wasn’t thinking about a song for a playlist or the radio or a song to get a hundred million streams. I wanted to make a tiny EP of songs that I like. If it gets a hundred million or a thousand streams, then whatever. I wanted to do this before I work on an album for many months at a time. It has my stamp of approval, and it shows a different side of me.”

Taken from the August 2021 edition of Dork, out now. Jawny’s EP ‘The Story of Hugo’ is out now.