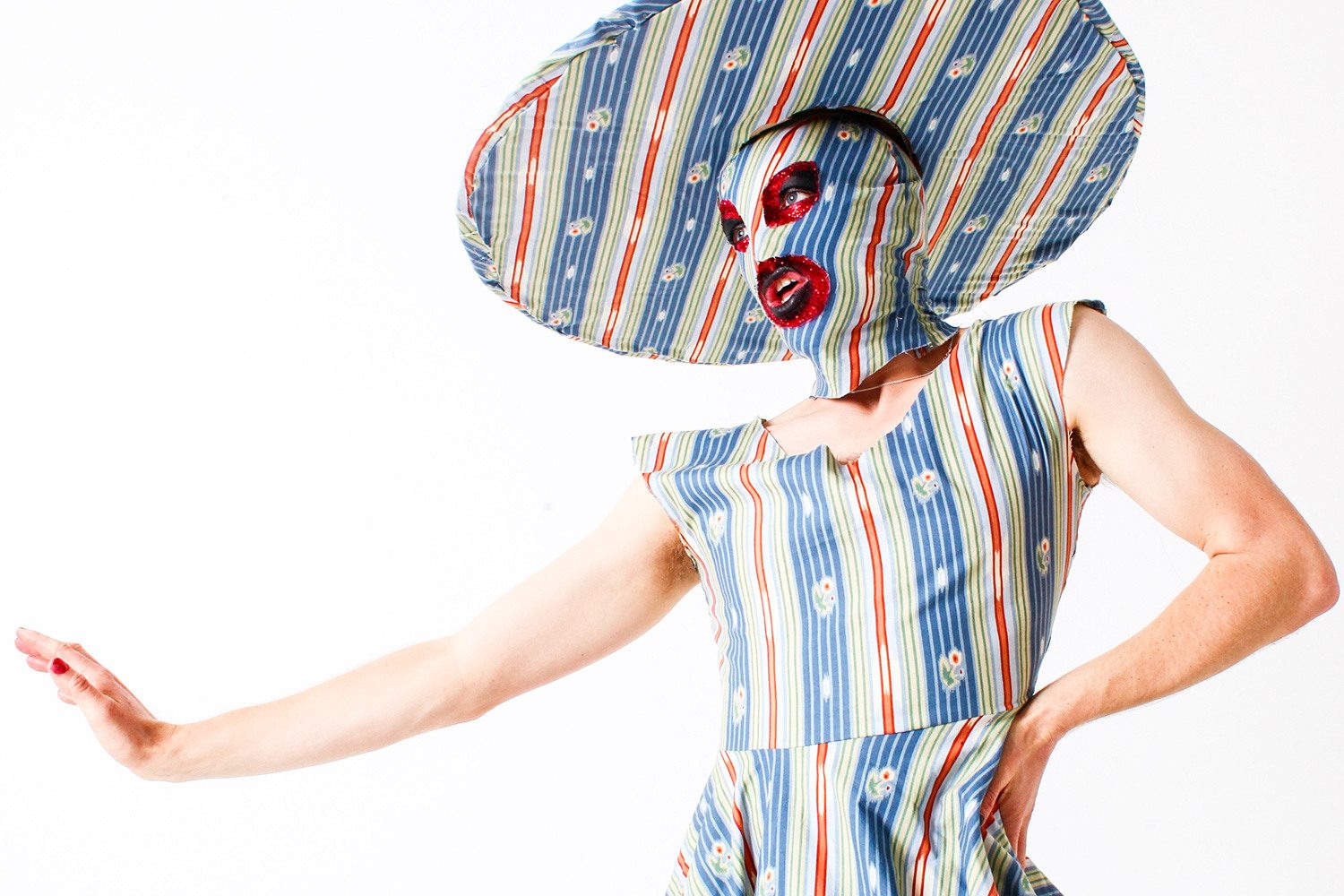 Lynks: “What is cool? Cool is safe. Cool is easy. And cool’s boring to watch”

Take a peek beneath Lynks’ pop-star persona with the man behind the mask, Elliot Brett.

“My whole goal for Lynks has been to create the most ultimately entertaining, short-attention-span-catering thing in the world,” says a highly enthusiastic Elliot Brett on his alter-ego’s primary drive since day one. It’s what brought him to existence, to Bristol’s house parties and drag show stages.

“When I was in Bristol, we were doing all these scrappy shows, really dirty and weird. It’s still unpolished, but then it was deeply unpolished. The whole vibe was like get covered in dirt, roll around on the floor. Get the cake. Eat the cake. Smash the cake on your face vibes,” he laughs.

Now based in London, fans are eating up his electro-pop experience consisting of everything from how to make bechamel sauce song-recipe, masc4masc satire in ‘Str8 Acting’ to dark comedy confessions on being desperate, lonely and queer.

“I was doing all the crazy stuff on stage, and at the end of the day, I was really proud of the music I was making, and I really liked it. I thought I need to do justice to this music,” Elliot elaborates.

The real, cathartic euphoria that Lynks serves can’t be found in the cool waters of the comfort zone.

“I never want to perform something I don’t love. The cool, I don’t care. Also, because like, what is cool? Cool is safe. Cool is easy. And cool’s boring to watch. We’ve all watched cool. When you watch someone that is not cool on stage but does it really well, it’s the most exciting thing in the world. It’s just so much more engaging. You don’t want to watch someone on stage being like, ‘yeah guys I’m so grateful to be here. This song is called ‘Water’.’ Fuck that. I’m never doing that again. I used to that. I’m not doing that anymore. It’s not fun.”

“It’s just like a funhouse mirror. You take the scary monster and put it in a clown costume”

In the beginning, Lynks was essentially a funny-looking gimp-size shield that Elliot could hide behind so the real him wouldn’t have to face the crowd. It let him perform his musical madness with no limitations or mental-strings attached.

“I’m over that now, to be honest. It was really helpful to get where I am now. If now a magic spell happened and Lynks didn’t have a costume, and it was just me, I think would still do it. That’s personal growth, baby,” Elliot says.

Congratulations aside, Lynks is still with us, and he’s got a new record to release, a second EP, ‘Smash Hits Vol.2’. The most feverish synth-bangers have arrived; the dark cabaret starts soon, and Lynks brings his A-game with every track.

“’Brand New Face’ is all about the culture we live in where when we don’t like the way we look, we’re encouraged to just change it rather than to accept it,” he says.

Sometimes, even if you do change everything about you, the outside world still won’t let you in. ‘Everyone’s Hot (And I’m Not)’ is a Lynks-style reaction to Elliot’s facing a quite violent turn down after a casual flirt attempt.

“It was like ‘fuck off, get out of here’ kind of thing. It was really nasty. When I got on the bus afterwards, I was feeling like such a specific horrible feeling. It’s rejection, but you also feel like a sort of weird outsider. Especially that it was out on a club night in a very straight club. You already feel out of place, and it’s just the thing that kind of crushes you out.”

Wanting his music to be a safe and inclusive space, Lynks Afrikka – originally named after the iconic deodorant – dropped the second part of his name, having people question its propriety. “If someone finds my music and likes it, I don’t want them to feel alienated or that I’m being insensitive,” he reasons.

Lynks might be the ultimate entertainer, but his main superpower is not turning everything into a 24/7 party, but rather having the ability to borrow our fears for one-night fancies and return them reshaped. “In a lot of my songs, I take something really, really dark, and then I turn all the leavers up to 100, and by doing that everything becomes ridiculous and then really silly.

“It’s just like a funhouse mirror. When you put out like a weird curved mirror, and something awful suddenly looks like this weird, silly thing. You take the scary monster and put it in a clown costume. I mean that sounds terrifying too, but you dress it up as silly, and somehow it takes away its power.”

Somewhere in between performing in his one-person circus, mastering his wonky beats so they slap real hard, and undergoing identity experimentations, Lynks was tipped by the mighty Elton John himself as a new face of the queer revolution. Though, Elliot’s keen to point out that queer world isn’t homogenous.

“I think the public has always been ready for queer stuff, it’s just whether the people that get the queer stuff in front of the public are willing to back it. I think that people in the positions of power in the music industry really don’t give the public enough credit,” he declares.

Sold out shows and an ever-expanding circle of fun-seeking Lynks followers only confirm Elliot’s words – and this is just the beginning.

“I guess I am in drag,” he considers. “In the same way that Elton John was in drag or David Bowie was in drag. I love drag, so if anyone calls me a drag performer, then I feel very proud. I almost feel like if anything I don’t deserve it because I don’t work hard enough on the looks.”

“I’ve got a bunch of songs that I’m working on. There’s one that I was doing actually just before this interview. You know those adverts you get on dodgy websites where it’s like ‘single ladies in your area’? It’s from the point of view of her, of the advert lady,” he shares.

He’s got another record up his sleeve too, and he’s not sure whether to get it out or try his luck with an actual producer.

“It’s just strange. I mean, you get the sense that the music industry is in a very risk-averse place right now because of COVID and everything. I think that they want safe bets; I’m not sure it’s the best time to be a devil gimp.”

Maybe a devil gimp is just what the industry needs.