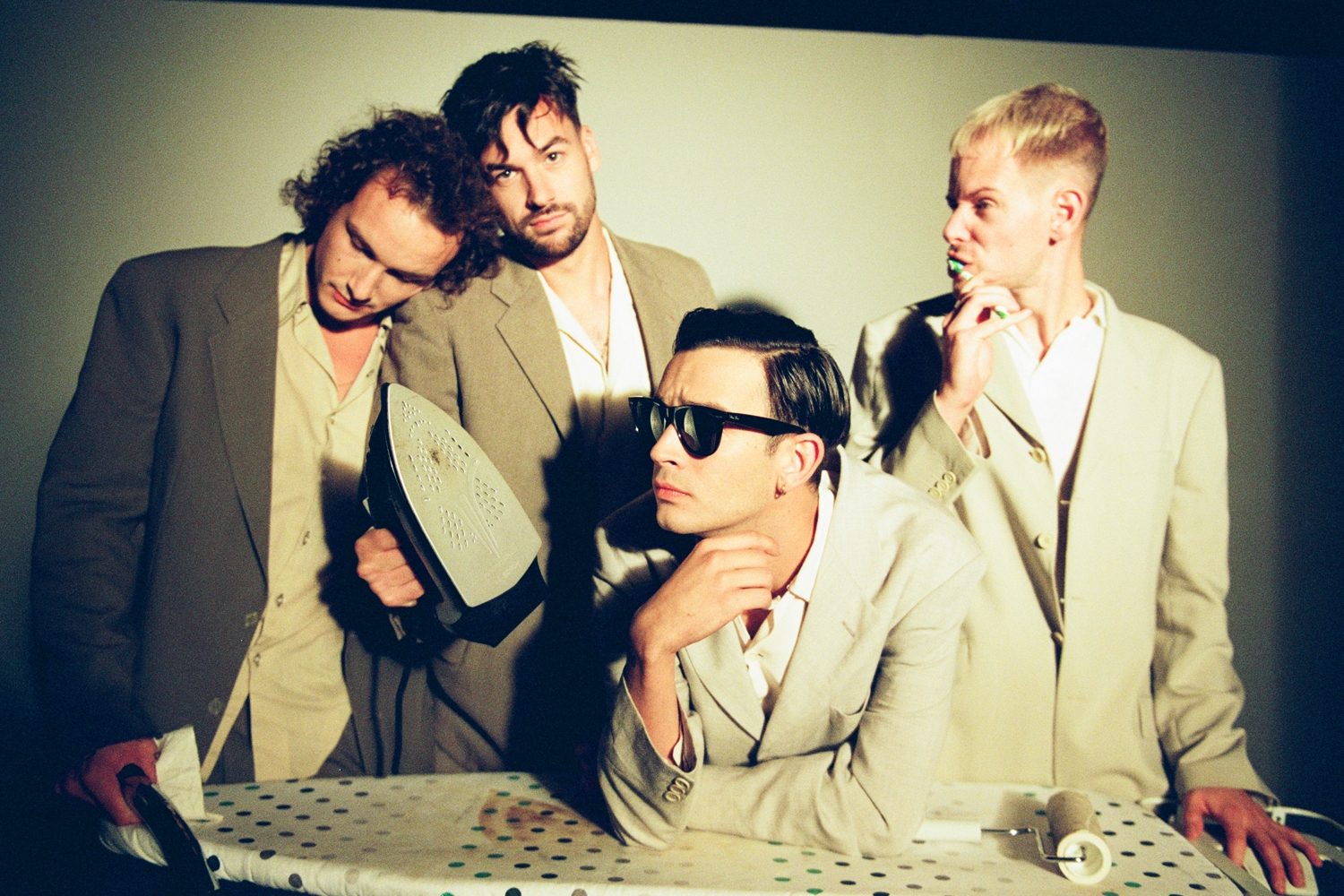 Everyone loves a good list, right? Well, Dear Reader, not compared to Dork’s Listmaster General Martyn Young you don’t. Each month, we’ll give him a new musical category to rank, then you can send in your rage-filled missives about just how wrong he is. It’s all good fun.

The Best British Bands of the Last Decade

(i.e. a British band with a debut album released between 12th Feb 2011 and 12th Feb 2021)
PLEASE NOTE: All opinions are those of Martyn Young and in no way represent Dork as a whole. We’re very sorry.

Try to imagine the last decade of music without The 1975. Pretty boring isn’t it? Less amazing songs, less ridiculous haircuts, less saxophone, less handsome bearded bassists, less weird electronic rave-ups, less guitarists with surprisingly beautiful hands, less bad fashion mistakes, less ill-advised hair dye jobs, less beautiful lyrics, less wildly ambitious and fantastical album release plans, less engaging activity to try and create a more positive and inclusive planet, less environmental awareness, less selling petrol, less nappies, less stupid insensitive statements on social media, less lyrics about Guy Debord (even he needed spectacles you see), less dancing and less nonsense. Yes, The 1975 have done it all over the past ten years, from the sleek and smooth pop of the debut to the neon explosion of ‘i like it when you sleep…’, the existential modern-day magnum opus of ‘A Brief Inquiry…’ and the scattergun brilliance of ‘Notes On A Conditional Form’. Matty, George, Ross and Adam have been right at the heart of everything amazing about British music with a beating ambitious heart that makes them a cut above the rest, taking their rightful place at the top of the list as the best band of the decade.

As amazing as The 1975 are there’s one thing they don’t have that this next band does. Yes, that’s right, it’s the Mercury award-winning legends that are Wolf Alice. Back in the old days of the noughties indie rock was a bit more of a boring and sedate place. There were nice things happening but someone needed to shake things right up, and Wolf Alice did just that. It’s impossible to truly state just how important Wolf Alice are. They are the catalyst for almost all the amazing bands you’ve read about in Dork over the last 5 years. The sonic alchemy and sheer chest-bursting power they have is unmatched and as we enter 2021 we are practically salivating at the prospect of a brand new Wolfies album to save us all.

Little Mix are the best pop band in the whole entire world. Now a trio (we love you Jesy) Perrie, Leigh-Anne and Jade have strode across the pop universe like queens since 2011 when they became the first group to win the X-Factor, defeating such luminaries as Nu Vibe and the quietly underrated 2 Shoes. In years since the girls have gone on to amass an iconic string of hit singles, with banger after banger arriving at a thrilling frequency. They were even at number one just last month with their latest hit ‘Sweet Melody’. Still at the top of their game, Little Mix reign supreme.

Paving the way for the likes of Brockhampton and a new generation of boy bands, One Direction reinvented the age-old concept for the 21st century and launched the career of now global superstars like HARRY!, ZAYN!, NIALL! LOUIS! and Liam. The boys are a true phenomenon, attaining levels of success that British acts could previously only dream of. While some have gone on to enjoy huge solo success, the memories of the glory days of 1D still burn bright. Hopefully one day they will reunite to reclaim their place as the best boyband of all time.

From one incredible band to another it’s Dork’s band of 2020. Sports Team are one of those bands who should be doomed to failure. Scrappy, haphazard and with a questionable taste in clothes and haircuts, they have managed to overcome all this to become the most exciting indie band of the moment. They’ve done this by sheer force of personality as well as having, y’know, some good songs. Lots of them in fact. At least nine! Never afraid of an outlandish statement and aware of their own ridiculousness, Sports Team are everything that makes up an exciting and uproariously fun band wrapped up in one beautiful bundle.

Years and Years are the sound of summer. The perfect band to have a dance floor celebration or a quiet little cry in the corner next to the vape machine and the lollipop dispenser, whichever one you prefer. Their debut album is a perfect collection of dance pop tunes that run the full range of emotions from ecstasy to heartbreak. If you’re looking at inspiring new pop icons of the modern age then look no further than Olly Alexander. Not only is he an amazing pop star he’s also so multi-talented that he’s currently starring in fantastic new and very vital telly drama It’s A Sin which you should watch right now (or as soon as you’ve finished reading this magazine, anyway – Ed).

Chvrches’ brand of twinkling synth-pop has long-established them as Dork faves, and when it comes to their thrilling live show complete with shiny lasers and effects they are unmatched. Equally as important though is their ability to make rush inducing pop bangers with a sharp lyrical edge. Oh, and they’re back this year as well. Isn’t that exciting?

Blossoms have, erm, well, blossomed into the ABBA of the North of England with the seventies pop odyssey of last year’s ace album ‘Foolish Loving Spaces’. A record that marks them out as some of our best pop songwriters taking guitar music in wonderful and joyous directions, it’s helped them stealthily climb to the top of the indie tree.

The two-time Dork cover stars are a little bit seedy, a little bit dangerous and a lot of raucous fun as they document the idiosyncratic, weird and wonderful underbelly of 21st-century society. Full of confidence and assured of their talents they offer a darker alternative to day-glo pop where you can wallow in the grime like a pig in muck.

Swim Deep were there right at the mid 2010s indie renaissance, and have gone on to great success with three killer albums that mark them out as unquestionably the second-best band in history from Birmingham behind Simon Le Bob’s boys (ask your parents – Ed). Let’s all Save A Prayer for Swim Deep.

Rather unusually for our Martyn, the scamp, this list contains little to get too worked up about. Peace might feel a bit put out, given they kicked off so much of the mid-2010s indie revival that most of this lot benefited from. Alt-J and Glass Animals probably deserve a shout too, as acts that can legitimately play the biggest stages all around the planet.
Stephen Ackroyd, Editor

As usually happens with Martyn’s lists, he comes close to being right here before wildly swerving off course and crashing sadly into a pond of misguided opinions at the sight of a strangely charismatic guitarist in his pants. No, I’m not having a flashback and yes, I’m talking about IDLES. Love them or hate them, there’s no disputing their importance as spiritual leaders of an entire scene and generation of post/post-punk/angry rock *delete as applicable* bands. Embrace your inner man in pants Martyn.
Jamie MacMillan, writer and photographer

Martyn’s list isn’t terrible, but as this part is all about manufacturing outrage, there is one glaring omission. It might seem hard to fathom now, but back in 2012, there was a real shortage of shouty bands from London. Enter Palma Violets, the band who kicked in the door of the long-since abandoned house of ‘crowdsurfing while topless and still somehow singing’ and set up a new scene from the debris. You might not enjoy being coated in a frontman’s sweat as he launches himself over the top of your head, Martyn, but for god’s sake don’t try to erase an entire scene with the stroke of your poisoned pen.
Jake Hawkes, writer and Down With Boring ‘presenter’