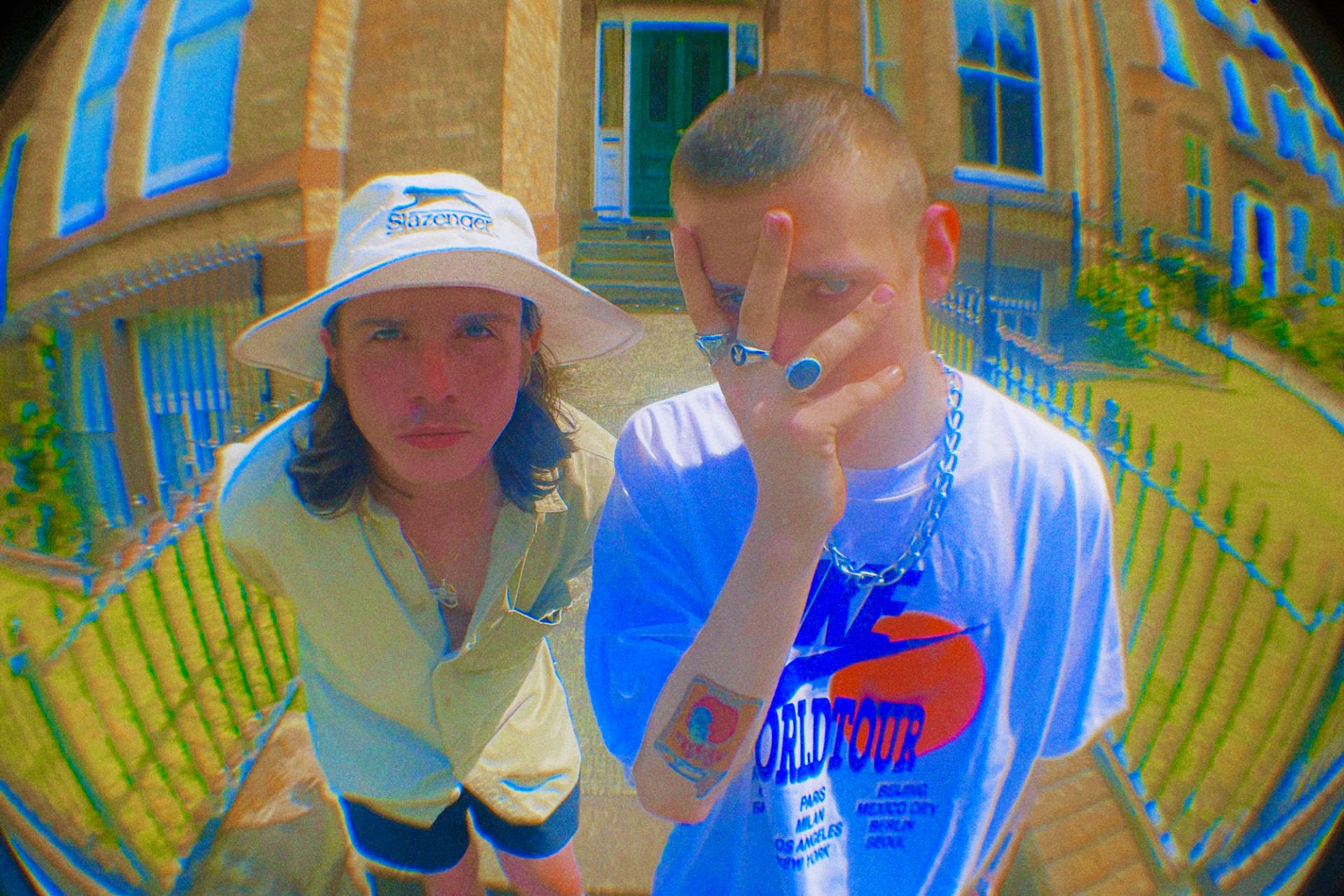 Police Car Collective: “We deserve to be stars”

Police Car Collective have been making waves as a secretive, mysterious group online, pumping out tunes with indie-pop, alt-rock, dream-pop and shoegaze influences – their genre as elusive as their character.

“I grew up outside of Washington DC in a bunch of punk bands and emo bands,” starts frontman Frankie. “I did DIY basement tours and all that in high school, then moved over here right after I turned 18 and to try to figure out what I was going to do with my life – how I was going to make music work.”

Simon, who primarily performs bass, explains: “I’m from Bristol but moved up here to Liverpool for uni. Through secondary school, I played in bands with my friends, basically trying to sound like The Smiths. I moved here, we met pretty soon after, and we clicked big time.”

For a duo who now adopt the motto ‘DELETE THE INTERNET’, it is a fun side-note that they actually wouldn’t exist without it – a duality somewhat plaguing the entirety of modern existence. In this specific case, the pair actually found each other through a double-date gone right; the guys clicked more with each other than their intended partners, and it’s these relationships that ultimately pushed forward. “Our band is us trying to figure out being on the internet, and what it means to exist on it, so it’s sort of ironic that we met through something that could only take place there,” Frankie reflects.

Following this odd meeting, Frankie shared pre-written material, which then morphed into what is now finally out in the world as the ‘1980’ EP. Following a surprise label signing after securing BBC Introducing radio play, the record was scrutinised and perfected before its official 2021 debut. “It’s been the longest EP campaign ever,” Simon laughs while also acknowledging their own fortune. “To everyone who asked how we did it – you’ve got to play the game. You have to constantly share music with people who may or may not catapult your career into space.”

In a combination of insane circumstances, the weaving roadmap of the last six months has only heightened a year that is already unlike anything anyone’s ever experienced before. Delays are to be expected in the current era, and for a self-described ‘collective’, you’d imagine this would be even more relevant. On this label – perhaps the only one that applies here – Frankie says that, “the idea of us being called a collective stemmed from the idea that I wanted to collaborate with as many people as possible. Anyone we work with, even just for five minutes, becomes a part of the project. It’s evolved so much and continues to, which is the beauty of it.”

Various artists of many talents have contributed towards the art produced here, and it certainly feels like yet another sneaky method to divert the attention away from the individuals at the core of the project. “We’re constantly trying to find the most inventive way to not have the focus be on us, but then in a strange way, the focus becomes even more on us because it’s like, ‘who are these guys?’” Frankie contemplates.

Police Car Collective’s social media presence is evidence of this perspective, as a carefully curated collection of content cements a consistent aura of intrigue that perfectly matches their music. He adds: “Social media has taken down all of the barriers between artists and the consumer. We like playing with that idea; how little information can you give out while still remaining engaging to people.”

The mystery radiates energy that leaves fans desperate to discover more detail. “It’s sexy, isn’t it?” Simon smirks. “Things you can’t have, you want. You’ll try to find these details, and it keeps people on their toes.” Frankie chips in: “It’s fun, too – we can do anything we want. Tomorrow we could post the most absurd thing and get away with it because you don’t know anything about us, so you have no expectations.”

Moving on to new releases, we’ve been told to expect new music “relatively soon” – an ambiguous but exciting promise. Frankie mentions a sincere admiration for David Bowie and the way he reinvented himself for each release, and expresses an inclination to follow a similar trajectory. Will this approach work in the modern era? Frankie answers: “The internet loves to make you seem like one thing forever, it’s easier to digest, but that’s not how human beings work or how the world works. People are always growing and evolving, so it’s an absurd notion to assume that artists wouldn’t do the same thing.” Well spoken, as always.

Alongside this resilience and obvious artistic talent, we ask what other characteristics lay the foundations for this duo’s future success. “Having a god complex? We deserve to be stars,” Simon declares. “When we first met that’s something we immediately bonded over, we’ve been walking around with the notion that we should be famous and if you have that attitude, it helps.” Frankie contributes: “people don’t want to come out and say they should be the biggest thing because it sounds quite arrogant. At the same time – if you don’t believe that, it’ll never be true.”

Taken from the August 2021 edition of Dork, out now.