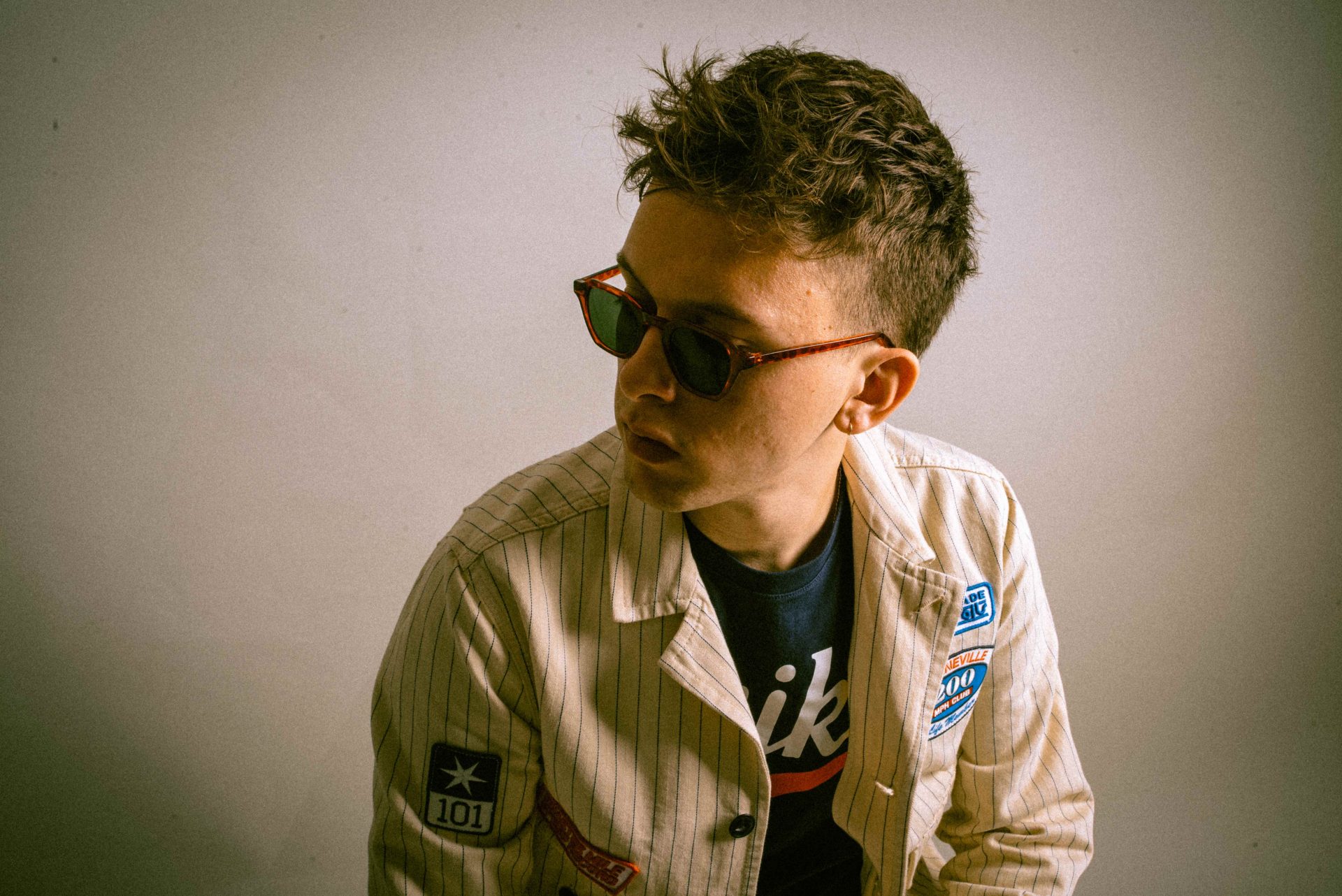 Ten Tonnes: “You have to be your own hype man”

Ethan Barnett, aka Ten Tonnes, has utilised the past year for an all-encompassing stock check and is now ready to return with a fresh vibe rooted in vintage aesthetics.

Following his Top 40 debut with 2019’s ‘Ten Tonnes’, Ethan Barnett has taken a bit of a break to rekindle his creative drive. Coming off his album tour and stepping back from the overwhelming nature of social media, the pandemic-induced lockdown actually came at rather a good time for him to kick back and relax.

As a young artist, though, he has been subjected to many of the same pains that the rest of Gen-Z have been suffering through over the last 12 months – this includes being forced to return home to the parents for a bit (gulp), which had him questioning “why have I gone from being an independent semi-adult to now living in my childhood bedroom again?”

Fortunately, this time away from the stage has at least been beneficial to his mindset. “It’s definitely been nice to set some time aside for self-reflection and just chill out a bit – I’ve had a couple of hectic years, in a good way by being busy with work, but it was nice to take a break and take stock, to enjoy some time for myself separate from music.”

This is not to say that a career break means cutting off from music entirely; as his range of upbeat releases clearly show, songwriting is more than just a job – it’s a hobby that takes up most of his days. “Songwriting is my favourite thing to do; regardless of being an artist in my own right, I’d still want to just write songs in any capacity. I love just to switch my brain off with music; that’s my idea of fun!”

As much of a creator as he is a listener, the Ten Tonnes project has provided that switch-off for thousands of others since his first EP in 2016. It emanates an aura combining mists of indie and rock with overarching pop sensibilities. “Fundamentally, if you write songs with hooks and choruses, you’re writing pop music in a sense,” he says. “It can be packaged differently, but that’s always what I’ve known and loved; that’s how I’d describe my own music. People do dismiss that sometimes but there is a great skill involved in writing something that’s that catchy; the pop slickness is hard to grasp.”

These elements are intricately intertwined with classic indie characteristics on tracks like ‘Lucy’ and ‘Better Than Me’, embodying the slickness Ethan is hinting at. The singles were part of an experience that bookended his early twenties, and now he’s already starting to turn to the next page.

When looking back on releases, he agreeably reflects that. “It’s a nice way of chaptering your life; once the album comes out, you can draw a line in the sand and put that behind you. I listen to it in a different way now; I’m separated from it, it is what it is, and it feels just like a thing that exists beyond me.”

At any rate, moving on from one chapter to the next has required more than just detachment from specific songs in this situation. Ten Tonnes is now embracing life as an independent creative after a career established alongside a major label. “With major labels, you have to understand the parameters of the transaction there. At the end of the day, it’s a business, so they need to run it like one,” he remarks. Despite the compromises that come with being a signed artist, there are certainly no harboured grudges here. “I was happy to step away; it was good for what it was, I’m glad I did it, and I did it at a good point in my life. On the other hand, it’s a nice feeling to have the autonomy back and be in control of it all.”

Now on his own label Silver Heart Records (a nice call-back for his fans), an EP seems like an appropriate first step to take on his own two feet. Titled ‘So Long’, this four-track record waves goodbye to glittery sonic environments and greets a more grounded, retro sound exploring high-energy rockers and allowing for some bubbly, rose-tinted moments. This is a deliberate contrast based on Ethan’s clarified intentions and direction. The format was also an obvious choice, as he justifies by describing how, “it takes a lot of time to make an LP, but EPs feel more fluid and relaxed. They work really well to keep energy and creativity flowing. It’s important to not create fatigue where people will expect just another Ten Tonnes song that sounds exactly like the rest.”

Another area in which Ethan has now taken command is production. After dabbling in relevant software during his A-Level studies and through a brief stint at university, this knowledge is now applied in a home studio before taken to a studio where Jag Jago spruces up these demos with technicalities. “In a compositional sense, it all comes from my home,” he confirms.

While crafting past tracks, the anticipated crowd reaction was something that was always fighting for attention and coming out on top in Ethan’s mind. “The modus operandi was songs that go down well live. I was going on tours between writing and studio sessions, and I’d always come back wanting a certain type of song; I was striving for that anthemic quality.”

The obvious lack of audience participation has forced a change of perspective, but fortunately, this arose almost unconsciously while ‘So Long’ was beginning to emerge. He hesitantly recognises this shift after a brief ponder. “It’s been interesting to notice, over the last year… I’ve been more writing songs for my own pleasure and creating sounds that I like. Even with clear festival-y tunes, I think the best music comes out when you’re making it for yourself rather than wondering what other people will think of it, and it’s nice to feel that freedom from expectations.”

As a currently independent artist, this self-fulfilment is a pursuit that comes naturally, but what doesn’t always magically appear is the drive to push forward even in the bleakest of moments. To do that, “you need to be your own biggest fan; not in an arrogant way, you just have to believe in what you do more than anybody else. That gives you the drive you need. You have to be really fucking annoying, be your own hype man, and not be scared to bother everybody.”

Despite this spirit of confidence as supposed optimism, Ethan affirms that he is certainly more of a realist, probably hinged on the amount of time spent inside his own head. Claiming overthinking as one of his fundamental and defining characteristics, anxiety is only substantiated by excess alone time – something we can all relate to. But is this beneficial to an artist?

“That’s a big part of me with its obvious downsides, but it is wicked when it can be funnelled into creative things,” Ethan judges. “These things make you uniquely you, the shit you go through becomes a part of you, and everyone has those special characteristics caused by tough things. I wouldn’t want to take it away because I don’t know who I’d be. You’d be an entirely different person. Sometimes I do wish I could be a bit more chilled, though,” he jokes. A surprisingly optimistic view of mental health, then.

This is one of many themes tackled on new material; recent single ‘Everything You Got’ traverses the journey of learning to switch off your brain and just go for it, whatever that ‘it’ might mean to those who are listening. Ten Tonnes songs often leave these broad themes left as vague commentary to be applied as fans themselves decide, as art should be open to interpretation – a mantra Ethan holds close. “I don’t want to spell things out and dictate meaning to you – that’s what music is about; you can listen and interpret it how you want. I’m always hesitant to say, ‘this is what my song’s about; this is why I wrote it’. I’ve got my own meaning to it, but yours doesn’t have to be the exact same.”

Artistic expression and interpretation is a cathartic release for both parties involved, and something Ethan thinks should be done at your own pace. Although it’s been the main quantifier of success while being stuck behind physical and metaphorical screens, stream numbers are not something that he aspires to focus on. His ambitions are more genuine, as he concludes happily from his home studio in Bristol. “Being able to hold my own album is everything I ever wanted, and anything on top of that is the biggest bonus in the world; I just want to know that I’ve worked as hard as I can. I feel so insanely lucky every day to do what I do, and I want to carry on doing it. Writing songs, doing tours when those can happen, just being a musician – as long as I can keep that up, I don’t need anything else.”