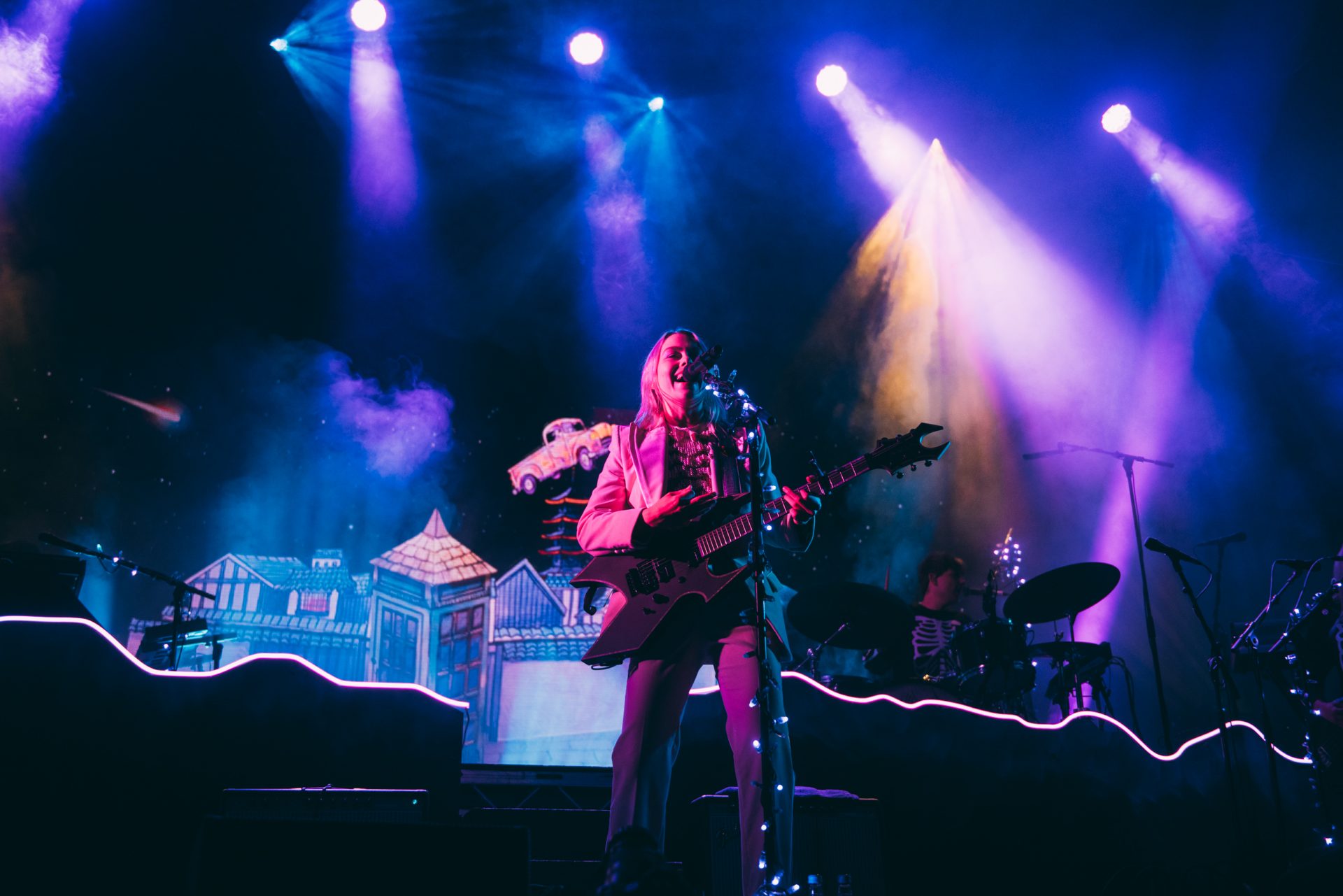 Phoebe Bridgers, Maggie Rogers, Rina Sawayama and more get Latitude 2022 off to an exciting start

Following a monumental, post-pandemic return to live music last year, Latitude 2022 has much to live up to. Despite fighting for space amongst a crucible of celebrity chef hosts, comedy icons and independent caterers, it is (of course) the music that shines brightest. Not that we’re biased, or anything.

Finally making his Latitude debut after being booked to play the 2020 event, Lewis Capaldi takes to the Obelisk Arena to close out the first full day back.

His heartbreaking ballads seemingly haven’t lost any mass-market appeal over the three years since ‘Divinely Uninspired To A Hellish Extent’ first cast out its sombre but uplifting waves. Despite a lack of new material – Lewis tells the crowd he spent most of the lockdown period “in his room masturbating” instead of writing music – he still packs a significant punch. With new ballads promised before the year closes, the limits of Capaldi’s potential are yet to be fully established but armed with confetti, fireworks and plenty of soaring singalongs, tonight is a reminder about why he’s one of Britain’s most adored popstars.

Away from the relative safety of Lewis’ heartbreaking anthems and crude language, the Friday of Latitude is dominated by a fresh, vibrant who’s who of current alt-pop icons, all determined to shake things up. In a world where other line-ups can so easily become stuck in the mud of indie bands past, it’s an offering that seems to understand where the most interesting (or at least exciting) music is being made.

Rina Sawayama‘s acclaimed pop is a stylistic declaration of both her attitude and identity, one that she embraces and revolutionises, going big and bold in all the right ways. Marching straight into ‘Dynasty’, Rina’s live band ramp up her genre-splicing rock edge, inspiring an instant ‘yes’ when she poses her now customary question, “are you ready to slay?”

Dancing along a delicate knife edge between enigmatic rock and pop superstardom, Rina skips across the boundaries with each step forward through a set of pure bangers. “Thank you for making me feel seen, heard and, most importantly, confident,” she gushes, the blare of ‘Comme Des Garcons’ showing that this gift is exchanged in both directions.

Fully exploring the acclaimed world of ‘Sawayama’, fresh teases at its follow-up ‘Hold The Girl’ are undeniably thrilling as the now iconic ‘XS’ and recent single ‘This Hell’ drive us towards the conclusion of a dynamic, precisely calculated set of inspired staging.

Self Esteem‘s empowering and brutally reflective songs hardly need any more praise at this point, but Henham Park grants them the honour regardless. Following a secret acoustic set earlier in the day, Rebecca Lucy Taylor brings her refined troupe – and a return of the Boots Advantage Card dress – to the BBC Sounds tent with complete vigour.

A hunger for the dramatisation of life experiences fuels an empowering but celebratory set. “I know it’s Friday, but I’d like you to peak early with me,” she asks. Many are happy to oblige.

If we’re talking about universal acclaim, current Dork cover star Maggie Rogers should have plenty coming her way, as her stunning new album ‘Surrender’ prepares to hit. Brining an eight-piece band to deliver joyous alt-pop, a brilliantly loose and carefree set is mirrored by the singer’s physicality. In her first UK festival appearance in three years, Maggie is keen to tee up the record she releases in less than a week now – ‘Want Want’ is a perfect teaser, her infectious passion leaving us yearning for more.

An alternate world awaits just one stage over with Caroline Polacheck, utilising a familiar palette but revelling in the darker elements. A seclusive backdrop makes any clear glimpse of her seem thrilling, deep beats of ‘I Give Up’ quickly enhancing those theatrics.

Transforming the tent into a dimension of her own, she entrances the crowd. A few unreleased moments, including potential new favourite ‘Smoke’, immediately stand tall against the momentous heights of ‘So Hot You’re Hurting My Feelings’.

Perhaps the most notable set though is a powerful, stage-topping showing from none other than Pheobe Bridgers. Fast becoming a contender for the AAA list, she packs out – or rather overflows -the BBC Sounds Stage for her highly anticipated closing set.

The excitement in the room is near palpable as her cloudlike staging is erected, while a quick blast of Distrubed’s ‘Down With The Sickness only ramps things up a notch. However, when the opening notes of ‘Motion Sickness’ hit, the only word to describe the atmosphere is feral.

Gentle plucking and a percussive throb enforce a storytelling prowess second to none, with lyrical details buried within tracks like ‘Garden Song’ so specific it becomes impossible to not get lost in the details. “I’m gonna do some cheery little numbers for ya,” Phoebe teases before pulling out ‘Kyoto’ – her natural intimacy making every listener present feel part of her closest clique. Cultish reactions arise from every song, except this cult bridges continents.

She’s not scared of hitting the bigger issues, either, expressing her hatred for the government and Supreme Court before revealing that she had an abortion last year for “no spectacular reason other than I didn’t want a baby.”  Leading into a ‘Chinese Satellite’ – a song about faith and the hatred it can inspire, it’s a powerful moment that’s given extra weight thanks to an appearance from Saddest Factory signee Charlie Hickey.

Treating each topic with the careful delicacy it deserves, Phoebe Bridgers is both a softly spoken rockstar and an artist whose output should be truly treasured. With Rina Sawayama and Maggie Rogers crashing the stage for the phenomenal close of ‘I Know The End’, Phoebe dives into the crowd with the biggest of grins.