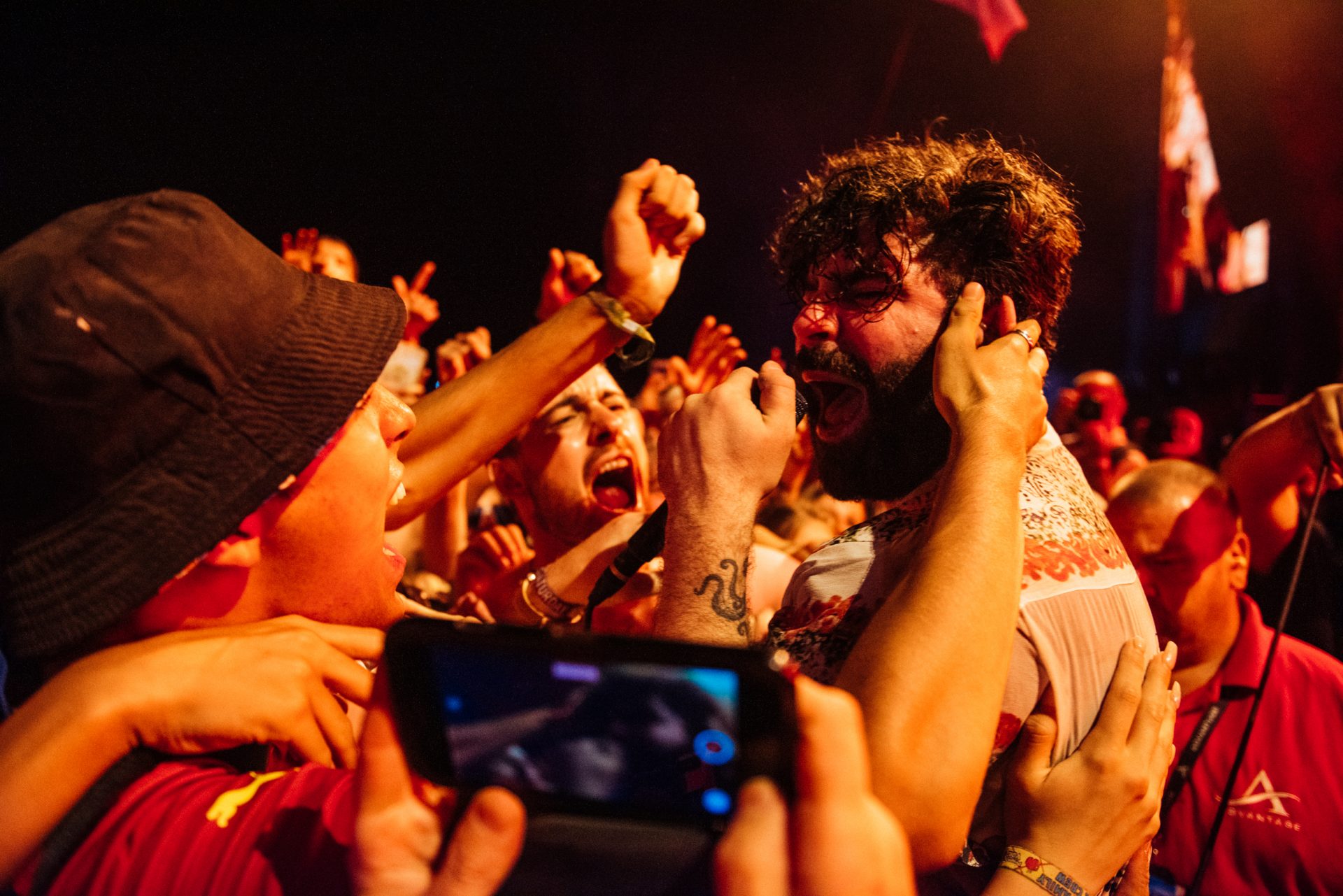 With initial impressions in the bag, it’s time for the weekend proper – Suffolk brings the heat, and Latitude‘s Saturday lineup isn’t far behind, with party vibes found in all corners.

Priestgate bring screeching, howling, gymnastic forms of expression to the muggy Alcove, with Rob Schofield leading the ragtag group as part vocalist, part contortionist. Their searing intensity combined with the blistering humidity soon sees Rob’s white vest torn from his body, an intimidating move that’s somewhat softened when he admits, “my mum is going to kill me when she sees the state of these trousers”. The five-piece are clearly enjoying themselves. By the time ‘Summ(air)’ declares, “I just wanna see the sun’, everyone leaves pumped up for the day ahead.

Los Bitchos throw some spice into the mix with a Colombian-style psych-surf hybrid. Though very much London-based, the group present a vividly globe-trotting experience. An almost exclusively instrumental showing gives their brand of funk a unique texture. Various beach balls ping around the crowd as Serra Petale slaps her bongos, bubble machines blowing not far behind. Prime siesta time evolves into an impromptu party – with a debut album titled ‘Let The Festivities Begin!’, it was probably to be expected.

Katy J Pearson‘s modern take on folk-rock supplies colourful, silky, soothing cuts from recent second record ‘Sound of the Morning’. Truly a million miles away from her last showing at Latitude – a past project with her brother that didn’t quite manage to stimulate the same response as today – but still maintains the same plain humility. Introducing socio-political criticism with ‘Alligator’, a song inspired by a £560 EON bill, Pearson otherwise maintains a wholesome energy until she closes with her first release, ‘Tonight’.

Cavetown offers one final respite before the chaos commences. From YouTube to Bandcamp to Discord, Robbie’s fanbase is a welcoming community that prioritises acceptance, and his shows are no different. Utilising that connection, he’s able to belatedly celebrate last year’s ‘Sleepyhead’ while also flexing fresh drops like ‘Grocery Store’. Fusing acoustics with jolting waves of volume, ‘1994’, an unreleased track only played once before, brings roaring electric tones, while a cover of Metric’s ‘Black Sheep’ cements this capability further. With a refreshingly young fanbase latching on to every word, Cavetown’s world continues to offer something more than a little special.

If there’s anyone capable of bringing the raucous energy right back, it’s the illustrious Little Simz. Now four albums deep, her most complex and developed work yet ‘Sometimes I Might Be Introvert’ truly established itself as one of 2021’s best records.

The introspective yet broad and fulfilling world defined on that record is brought to life immediately with its opening title track. Soulful but invigorating, Little Simz probes a unifying duality; ‘I Love You, I Hate You’ exemplifies this before a delve into third studio album ‘Grey Area’. “Our energy is a transaction… you feed me, I feed you,” she proclaims before bouncing along the barrier for ‘101 FM’, a track dedicated to her hometown. Effortlessly slick and with more talent than she has time to evidence, Little Simz continued success is well deserved – something the moshpits to ‘Venom’ only confirm.

With festival headliner status long secured – the band got their first big bill-topping slot at Latitude back in 2013 – Foals are able to explore multiple facets of their comprehensive discography, but the blissful fluidity of their latest record ‘Life Is Yours’ certainly makes for a boisterous and fitting introduction. Latitude laps up the rhythmic appeal of songs like ‘Wake Me Up’, and further cuts continue to reflect on nostalgic sentiment while attracting new listeners with every note.

The trio – joined by two live companions – blast out the iconic riffs of ‘Mountain At My Gates’ and ‘My Number’ early in the set. Their trade in songs that are more inventive, more hungry to build upon their predecessors, and more cross-disciplinary than many of their peers is easy to see, every conceivable element of their back catalogue demanding studious motion in one way or another.

Through the powerful, rhythmic ‘In Degrees’ and other glorious returns to past records, the newfound flamboyance of tracks like ‘2001’ arise as fresh achievements. Although the rigour of ‘Inhaler’ makes it destined to be a moment worthy of saving for the encore, the new dancier, poppier hues that Foals have grown to lean into are starting to steal the show. If there’s a more appropriate way to demolish a Saturday evening, we’re yet to hear it.