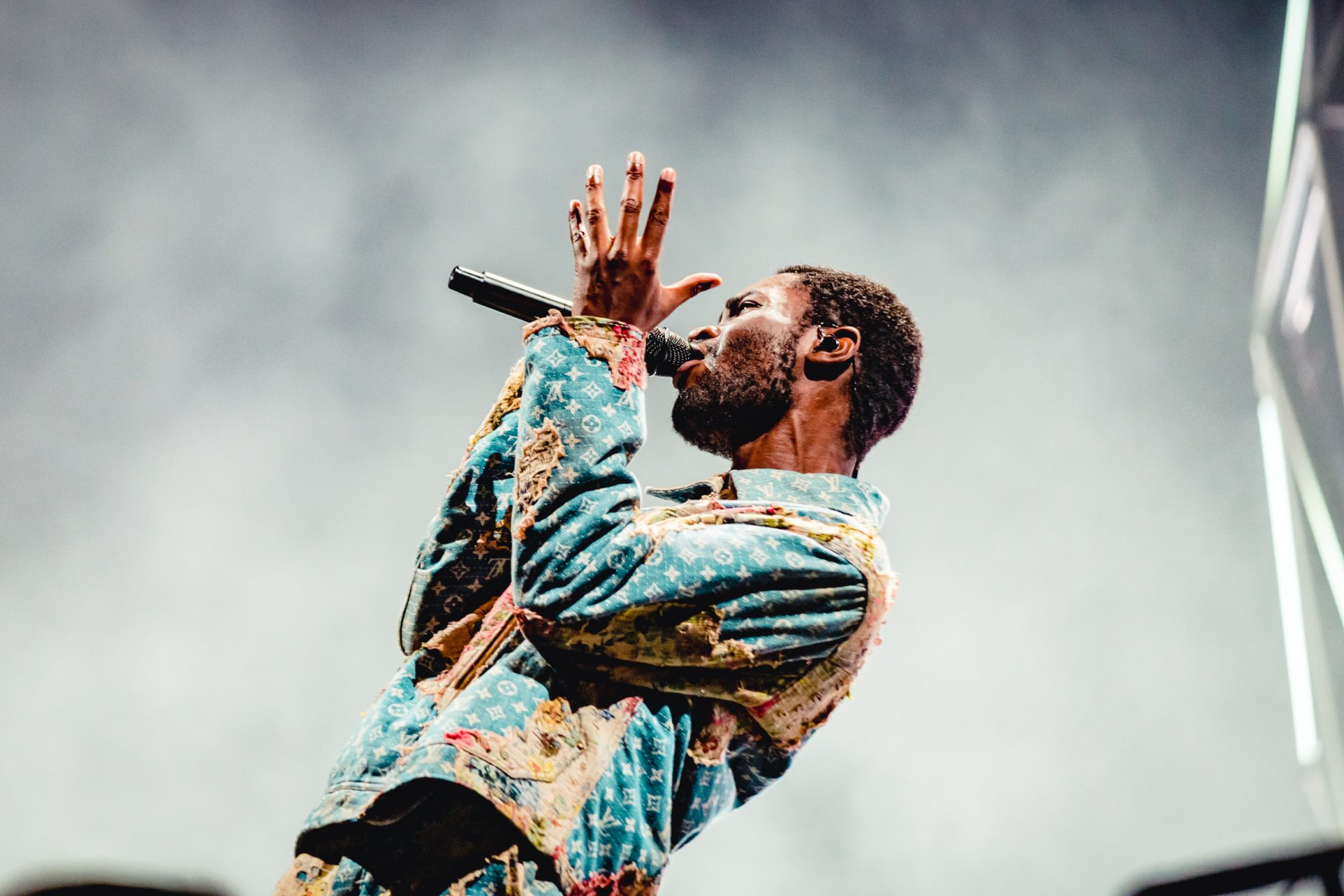 Reading Festival is a lot of things. A punctuation mark on the biggest events of the summer season. A temperature check on both popular and alternative culture. A place where legends begin, end or enhance their standing. It’s a right of passage; one bigger than just music, but one fueled by the ebb and flow of trends and timeless tradition. 2022’s version is no different. The second edition since the festival switched to a duel Main Stage set up, it’s packed with global stars and exciting newcomers. The opening Friday plays host to both.

piri & tommy prove the perfect act to open up Reading’s Dance stage – the crowd is bouncing before the duo even walk on, and soon enough, all that can be felt is an intense humidity as their loose and fluid set opens with ‘beachin’. It’s a liberating style that can be enjoyed in different ways, relaxed or involved, but the young crowd leans right into the hype, the packed-out tent infected by piri’s palpable enthusiasm. While she works the crowd, tommy’s cowbell adds to the live drums and beats that later back some slick guitar riffing. Latest single ‘on and on’ dispels any pretence of the two stars benefiting solely from 15 minutes of TikTok fame. Their talents effortlessly gel into something fresh and exciting, a fusion resulting in rapid momentum. piri & tommy are here for a good time and, if the hits continue like this, presumably a long time too. (FH)

If you want proof that Reading isn’t just any other festival for bands, look no further than Black Honey. The sort of moment they’ve been aiming for since the moment they started is finally realised today with a glorious sense of fizzing wonder. That cinematic flair and assortment box of bangers go down a storm, with ‘I Like The Way You Die’, ‘Corinne’ and a scorching ‘Run For Cover’ serving up one box office moment after the other. New material like the razor-sharp ‘Out Of My Mind’ and latest single ‘Charlie Bronson’ makes things even more thrilling – pointing to a band not just revelling in the moment, but using it as a springboard for what looks like their brightest era to date. Now that’s what Reading is all about. (JM)

LA charmers Wallows bring their luxuriously lo-fi indie pop vibes across the pond, shifting their show from the likes of Lollapalooza and Coachella to the slightly soggy fields of England. Fortunately, their laidback energy isn’t lost on the crowd, who turn near feral as soon as the Indiana Jones theme backs the trio’s entrance. Opening with ‘I Don’t Want To Talk’, a cut from March’s ‘Tell Me That It’s Over’, Dylan Minnette’s lead vocals start off rough but quickly shake off the jet leg – a delightful turn on the harmonica seems to help. When Braeden Lemasters joins him with harmonic backing, their charm is irresistible.

Their first-ever UK festival performance is a clear home run, as the gang affirm that they have missed the British crowds and their fans back home should take note. Bringing listeners in with the accessibility of their early offerings and then ambushing them with the ambitious scope of more recent releases, Wallows serve up luscious soundscapes no matter where you look. A quick cover of 1D’s ‘What Makes You Beautiful’ also riles up the audience, although it isn’t needed; a total of six moshpits collide just before ‘Scrawny’. Although the band’s evolution towards progressively braver decision-making is affirming to observe, their momentum inevitably barrels towards their biggest viral moment and obvious set closer ‘Are You Bored Yet?’ (FH)

While most people’s first time at Reading involves loads of fizzy pop and questionable decisions, Griff’s is more focused on the sort of commanding pop takeover that already feels destined for the big slots. Immediate and infectious, it’s a slick show full of warmth and bangers galore that never relents in pace. A party atmosphere bounces when turning smash ‘One Night’ into a run through Whitney Houston’s ‘I Wanna Dance With Somebody’, ‘Head On Fire’ cues up sing-a-longs, and by the time ‘Black Hole’ rounds out proceedings, the Reading crowd are feverish and calling for more. Accomplished, smile-inducing and captivating – it’s a statement of intent. (JM)

Those jokes about missing a whole PinkPantheress show if you go to the toilet might just be true. In fact, today you’d be lucky to see her at all. For her first festival season, the Radio 1 Dance Stage already feels like a severe underplay, and the crowd, who’ve presumably arrived at the festival after picking up their GSCE results (PinkPantheress asks them what they got), are both spilling out into the field and desperately pushing their way in. With a showing so big, her ASMR vocals barely reach the edge of it. Thankfully there’s plenty there to fill in on Tiktok favourites ‘Just For Me’ and ‘Pain’, the latter of which she leads into with a cover of Sweet Female Attitude’s garage classic ‘Flowers’, bringing her signature sampling to the stage. She repeatedly mentions how surprised she is that so many people are there to see her, and how she can’t believe they want to listen to her music, a stark representation of how those TikTok numbers translate to IRL listeners. (AF)

Over on Main Stage West, the teatime slot is filled by Joy Crookes’ gorgeous smoky vocals. Amidst the chaos of Scene Queen and PinkPantheress, and the pop bops of Griff, she’s a breezy break as the last of Friday sun peaks out from behind the stage.

Despite having a Mercury nominated record to play, she still squeezes in time for a cover of Kendrick Lamar’s ‘ELEMENT’, and asks who hates the government before the sharp Brexit-slag-off ‘Kingdom’. Ending on the South London love letter ‘When You Were Mine’, Joy’s set brings the same heritage appreciation of her debut ‘Skin’ to the huge stage it belongs on. (AF)

Reading as a festival has expanded in recent years to include every genre under the sun, but its heart remains with the bucket-hat wearing indie masses. Luckily, Circa Waves are here to get them throwing pints and making mosh pits like nobody’s business. Several albums in, they’ve built up an impressive back catalogue of festival hits, with the absolutely massive crowd treating newer cuts like 2020’s ‘Sad Happy’ with as much energy as old classics. Of course, it’s ‘T-Shirt Weather’ that gets the biggest reaction though, blasting out while the evening sun lights up the stage. It’s hands in the air and people on shoulders as the band close out their set with a grin. Dave and Megan Thee Stallion might be headlining, but Reading’s still got space in its heart for some good old-fashioned indie. (JH)

As Little Simz comes on stage, flanked by a full band, it feels like a shift in tone for the festival. She may have a guitarist, bassist and drummer, but what follows is 45 minutes of pure UK rap energy. Opening with ‘Introvert’, it’s not long before she has everyone on-side, with thousands screaming the lyrics back at her. It doesn’t hurt that Little Simz has been doing this for a while now, honing her stage presence to a point where she’s in full control throughout. With Polo G, Megan Thee Stallion, and Dave set to follow her, she’s pushing at an open door, and it’s clear that the critically acclaimed ‘GREY Area’ and ‘Sometimes I might Be Introvert’ have finally taken her over the top into well-deserved mainstream success. Finishing on a flawless run of ‘Point and Kill’, ‘Woman’ and ‘Venom’, today’s set leaves a mark that the festival is unlikely to forget. (JH)

Perfect time. Perfect festival. Perfect band. It’s a rarity when all three come together, but as the sun sets over the Main Stage at Reading – Glass Animals tick all those boxes and more. With grandstand production, tonight feels like a dress rehearsal for their increasingly inevitable headline era and a curtain call for an album that catapulted them into the stratosphere. A big screen celebration that doesn’t just rest on the hits, but celebrates the in-betweens – it’s pure, unfiltered joy. ‘Life Itself’, ‘Tangerine’ and ‘I Don’t Wanna Talk (I Just Wanna Dance)’ spin Reading into a disco ball of genre-smashing delights – ‘Tokyo Drifting’ a prime example of a band flourishing in their moment. As Dave Bayley tells the story of how he and drummer Joe were brought together by a spare ticket to Reading years back, their set is filled with emotion as they flex their muscles like never before. As the inevitable closing blast of ‘Heat Waves’ rings out, Glass Animals bid farewell to ‘Dreamland’ by claiming Reading as their own star-studded playground. They’ll be back for that next perfect festival moment in no time. (JM)

She steps out to a DJ announcing her as “the one and only, Megan Thee motherfucking Stallion”, opening with early hit ‘Realer’ and blasting through tracks from each of her projects since ‘Tina Snow’, she’s unstoppable. After a scorching day, Megan’s set only gets things hotter.

Speaking of, she keeps asking the audience if there’s any ‘hotties’ here – “OG Hotties” for ‘Tina Snow’ tracks, “2019 Hotties” for ‘Fever’ tracks, “real hot girls” for everything else – and calls out a fan hoisting up a “BRING ME ON STAGE FOR CAPTAIN HOOK” banner. Unfortunately, security stops it happening in time, but eight fans make it on stage for ‘Cash Shit’, all twerking as expertly as they can in Megan’s honour.

Her relentless ability to create smashes has kept her at the top of her game since 2020, cutting through during the pandemic and hitting the ground running when it came to festival season last year. With the surprise release of ‘Traumazine’ little over a week ago, the tracks she performs have already gone big enough for her to play ‘NDA’ second and end on latest single ‘Her’. (AF)

As the youngest solo headliner Reading’s ever had, you could forgive Dave for being a bit nervous. If he’s feeling the pressure, though, he doesn’t show it. Walking on to little fanfare, it’s straight into ‘We’re All Alone’, standing in front of a giant framework heart as the crowd screams every word back at him.

Fireworks are peppered throughout the set, underscoring lines on ‘Professor X’ and smash-hit ‘Funky Friday’, but nothing on display feels like a set from a man with something to prove. Instead, it all has a sense of inevitability to it, and he even manages to pull off a section where he plays electric guitar without it seeming corny.

It’s a testament to UK rap’s mainstream success that booking someone like Dave no longer feels like a risk, and he isn’t forced to bring out a stream of guests to amp up the crowd. Of course, there’s a huge response when AJ Tracey comes bouncing out to rap his verse on ‘Thiago Silva’, and Stormzy’s entrance is greeted with near-hysterics. But there’s just as big a response to ‘Twenty To One’, and the crowd silence while he raps a large portion of ‘Heart Attack’ backed only by violins is genuinely moving.

It’s hard to bring nuance to a set without the slower songs becoming opportunities for fans to go to the bar / toilet / burger stand, especially at a festival where everyone’s been drinking for 12 hours. Not only does Dave manage to hold people’s attention, he does it without gimmicks and with only a little bit of pyro (well, it isn’t a headline set without some fire, is it?)

We’d say he’s confirmed his status as a megastar, but was anyone really expecting any different? (JH)