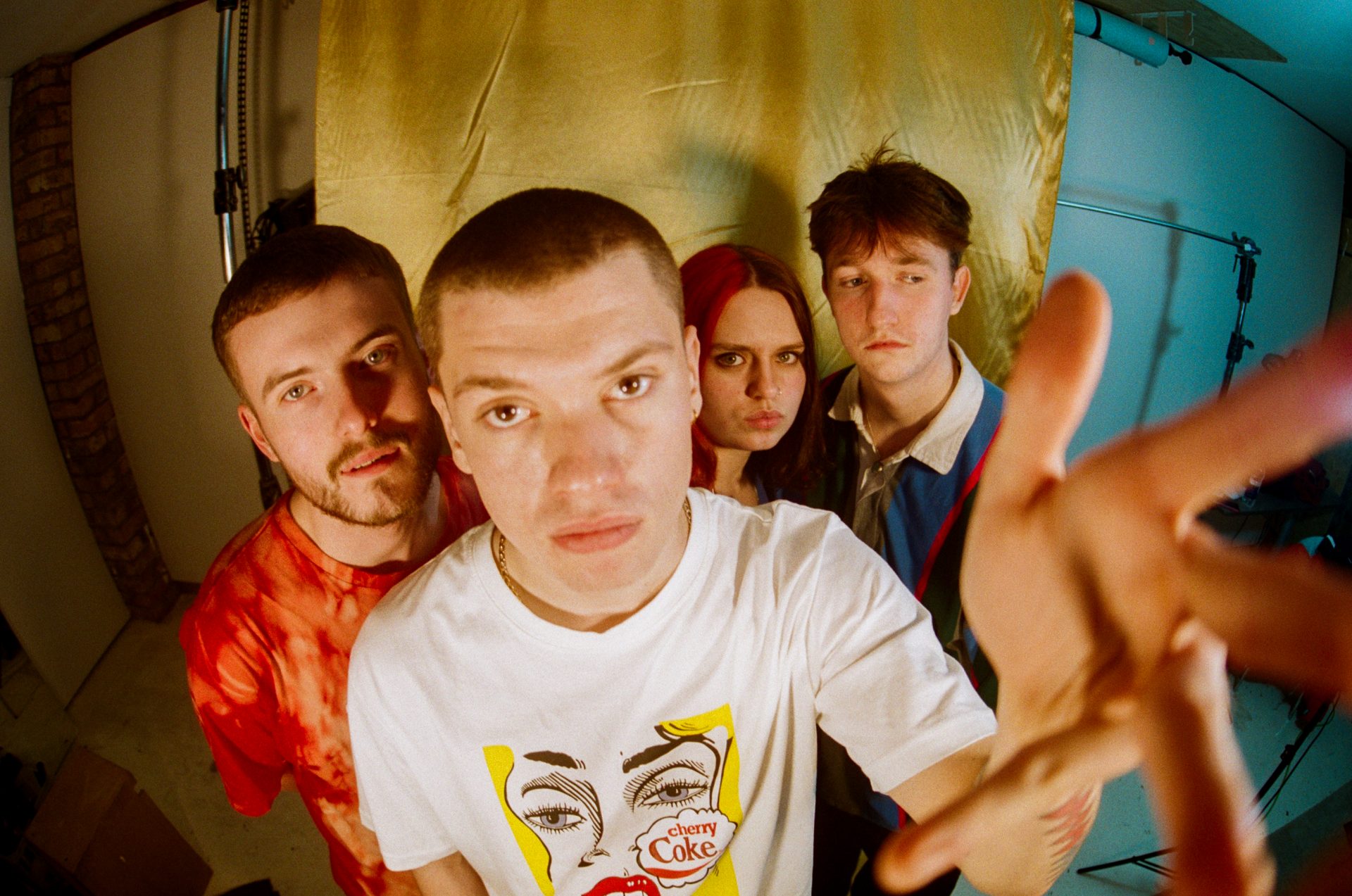 Getting to know… STONE: “It’s that feeling we get on stage that makes it worth it”

Ahead of their appearance at this year’s Barn on the Farm, indie upstarts STONE are buzzing to hit the festival circuit.

It must have been hard being ‘a band’ over the past few years. There’s a traditional order to things – put out music, build up a live following, go do the festivals. At least two thirds of that has been a muddle at best, for obvious reasons, but now we’re finally getting back to something approaching normality things are looking up. Building a rep as a live band already, STONE are ready to get onto the festival circuit proper. With Barn on the Farm just around the corner (yes, that’s one of the places you can catch them this year – Ed), we pulled lead guitarist Elliot out of a bedroom writing sesh to find out more.

Hi Elliot! Who are you all, and what are your roles within the band?
We have Fin, our lead poet and frontman, Sarah on bass and Alex, who hits things with sticks. Then me, who provides loud guitars and general chaos.

How did you approach finding your sound, did you go through a lot of experimentation? Are you all into similar things?
Fin and I had been playing in a previous band together for a couple of years before forming STONE, but we both have spent a lot of time trying things out and channelling our influences – hip-hop, rock, punk. Songs have come and gone, but after writing our single ‘Stupid’ a few years ago (which just properly came out), I think that really set the foundations for what would become our sound. After writing ‘Leave It Out’, Fin found his rhythm in his brand of Scouse poetry. He loves hip-hop and good lyrics, narratives and such, like The Streets. I like a lot of post-punk, psych and shoegaze and just finding out what horrible or sweet noises I can make with my guitar. I think just over the years, our chemistry has just been building, and we have found our little eclectic blend of Scouse noise, but we’re still pushing ourselves and finding the gold. I read a YouTube comment describing us as ‘post-apocalyptic Scally rock’, and that line just sits in my head rent-free.

Who was your first ever favourite band or pop star?
When I was a kid, the first band that really got me was Nirvana. Massive influence on me growing up, and have just always found Kurt Cobain so fascinating. I think the brilliance and tragedy of it all really gripped me when I was young. The sound is just so angry and visceral and channels that frustration which speaks to me, but there’s proper craft behind his writing too. Currently reading a memoir from his manager Danny Goldberg and it’s really interesting.

What’s it like being an up-and-coming act in Liverpool? Is the scene supportive, are there lots of opportunities?
Coming up in Liverpool is great – we have lost some important venues over the years, but I feel like the scene is coming back strong. Definitely felt that when we played Sound City start of May. Plus, you’ve got bands like The Mysterines and Courting who are getting radio love like us, so it’s great to be a part of that. I’m putting my ear to the ground a lot more these days and looking out for more local talent as well. Liverpool is in our DNA, and we are proud to be representing it.

Is being in a band living up to the hype so far?
Yes – we’re all loving it… But after some of the rigmarole of touring – living off of service station butties and sitting in vans and carrying amps and soundchecking and all that, I feel like it’s that feeling that we get on stage for 30, 50 mins that just makes it so worth it. When I feel that energy off the crowd, it’s just a constant reminder of why I’m trying to be a professional attention seeker. But the process of crafting tunes and seeing them come to life in the studio as well. Like magic. That’s kind of the two main things I love about it. That and telling Uber drivers to get on us on Spotify and search ‘stoneliverpool’ on the socials when asked. Wonder how many actually have…

What are you guys working on at the moment?
We’ve just finished a load of shows, so we have a few fezzie dates, including Barn On The Farm, R&L, Y NOT, Kendal Calling and a few European dates, too, which we’re buzzing for. We’re spending all our time outside of that just writing and writing. We’ll have some more new STONE for ya very soon.

Music aside, what do you do for fun?
I’d spin a yarn about the endless rock’n’roll debauchery, but it’s 2022, and I want a simple life. Boring answer, but I’m trying to get right back into some good habits to boost my creativity like reading, drawing, exercising, taking myself for walks and that. Everything else is just music, though. Always up for discovering albums and watching more shows. I do love DJing, though. You might see a STONE DJ set one day if you trust me enough with the aux.

You’re playing Barn on the Farm this year – are there any acts you’re particularly looking forward to seeing, or catching up with there?
Would love to catch Bombay Bicycle Club’s set – I think their debut album is class. Beabadoobee too. We have some friends of ours playing like Eli Smart, who we’ve just had with us on our May headline tour. Really good vibes. But I would love to come away having seen something brand new, too – playing all these shows ourselves sometimes makes me forget about the live music experience as a listener, and I am trying to come back to that where I can. There’s just so much out there.

Have you ever discovered a new favourite up-and-coming band at a festival before?
Think one example which stuck with me was catching Shame at Sound City 2019. Energy was just off the charts. Magnetic. Loved them even more since. As I say, I’m making a habit out of discovering new stuff.

You guys have played loads of live shows already, what’ve been your favourites?
It’s like picking a favourite child… I’ve been loving our headline shows this year; it’s been great to see where we stand in cities outside of Liverpool. The support we’ve been shown since we just got back onto the stage after Reading & Leeds last year has just been mad. But the Yungblud tour was crazy last October – stepping into a new world and just going up there to prove a point. But it worked. Loving festival season now, though – last week, we played Live At Leeds. I just love the stages – space for all the acrobatics and seeing people just gravitating towards the stage as we play. And lukewarm beer in a field.

Tell us a secret about yourself?
Had my ears pinned back when I was like, 5. Not really a secret, just a weird little fact about me. Looking forward to more plastic surgery in the coming years. ■