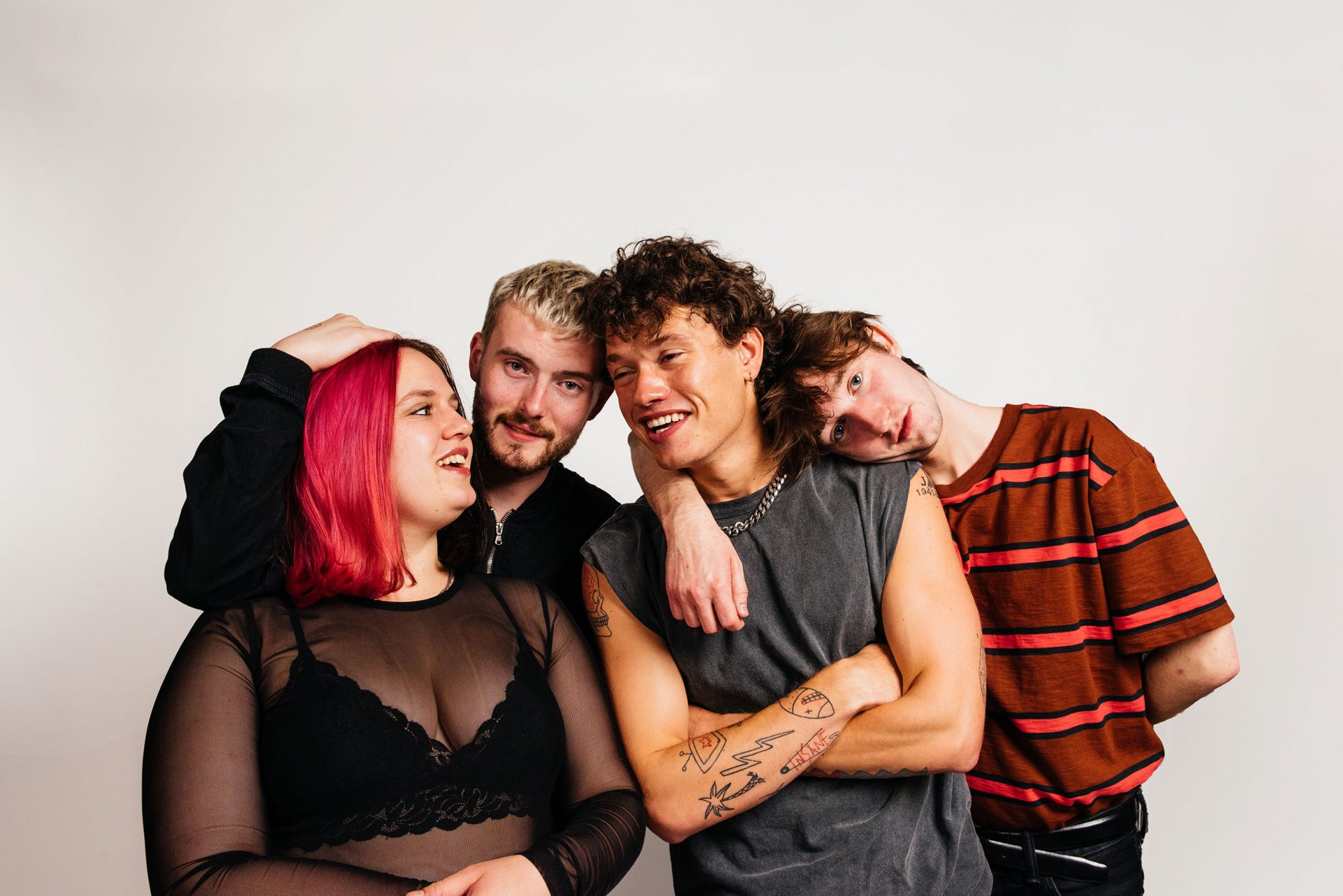 The indie noiseniks leading a charge.

As a band very much in their hypey, tastemaker era, a bunch of labels have been attached to STONE in an attempt to make sense of their attitudes. Some have stuck more than others, with “post-apocalyptic scally rockers” being an adopted favourite, but their self-declared tagline seems extremely fitting the more you learn – that being “the underground voice for the lost youth”.

The statement originated in their own unstable backgrounds as Fin and Elliot have both been through their share of struggle and mental health issues, but are now making a concentrated effort to support those facing the same problems. The former was a social carer before the band got signed earlier this summer, running his own mental well-being charity on the side, while the lead guitarist worked in youth clubs to support those with turbulent upbringings.

“We always been the kind of people to give back,” Fin states matter-of-factly. “That’s us as people – we do care. It’s not something we claim just to sound cool, although obviously it actually is quite a cool statement, but we as a band genuinely do care about the youth and our generation.”

It’s a fairly blatant observation to note that times are tough, and no one will be feeling that harder than the new generation of youngsters, struggling to find their own character online, a process Elliot says “can be such an overwhelming environment. We try to reflect that in our music, to give something for people to identify with in such a messy time to grow up.”

The ever-changing tool belt that allows us access to increasing quantity and diversity of content is a double-edged sword. “Everyone’s just shouting into a void,” Elliot resigns, “which can be a great way to find meaning and connection alongside others, but –” Fin interrupts, “it’s not a void. Everyone’s just shouting into a fucking echo chamber.”

Thoughts magnify and explode beyond control, and STONE have directed this loss of control into their own music. Their summer banger ‘WASTE’ might boast a thrashing instrumental and furious vocal delivery, but the frontman’s words nail a confusion and anger that only come from internal strife.

“The guy is sat in a pub telling the bartender, ‘I think I need some help, I’m going under, I’m losing my mind, it’s a matter of taste, just so you know, I’m waste’. I think that’s pretty dark,” Fin details. “I wrote that when I felt like I was in a videogame, like life wasn’t real. Some of it has to be left to perception, though; I don’t want to go too deep into my life experience. I’ve had some hard times, but music is my outlet; hopefully, we can give that to others.”

Although they aspire to uplift, STONE admit some frustration at the way in which other musicians might attempt to do the same. “There’s a really fine line between delivering a message that echoes genuine sentiment which people can relate to, and then marketing, exploiting or fetishising that – making it a token effort,” Elliot explains. “Unfortunately, that is definitely something that happens a lot.”

“When people are young and impressionable, you never want to promote sadness,” Fin adds. “I feel like these days, people can be like: ‘If you love depression, you’ll love this!’ You shouldn’t talk like that to younger people. We’re music for all people. People who are trying to find themselves – you’re safe at our gigs, and you’re safe with us. Mental health’s a serious thing; we’ve been through and felt it. It’s not something we want anyone to experience, and definitely not something we want to use to market our music.”

“We always been the kind of people to give back” – Fin
“We’re music for all people. People who are trying to find themselves – you’re safe at our gigs, and you’re safe with us”

Addressing these issues can be a gruelling process, and tackling the negatives in everyday life inevitably becomes exhausting, but STONE never lose sight of life’s silver linings as exemplified on ‘Money (Hope Ain’t Gone)’, the lead single from their diverse debut EP, ‘Punkadonk’. “A change, we want it / I feel it, it’s coming,” Fin promises on the track, reminding us that even the darkest gloom is only temporary.

“The government being a fucking arse crack doesn’t stop my local flower shop lady smiling as I walk past,” he declares. “It doesn’t stop the guy serving me coffee from asking how my day was; it doesn’t stop me from going to the gym and thinking positively about myself. Obviously, things aren’t easy for everyone, and some people have a really hard time in life, but happiness comes from within.”

The anthemic chorus on that track is just one distinct moment on a record full of left turns. STONE’s sound was initially informed by a conversational, almost spoken-word lyrical approach accompanied by post-punk-inspired guitar jams, but the group haven’t shied away from shaking things up.

“We’ve moulded into so much more than that,” the vocalist offers. “When we started, we found ourselves in the post-punk wave, but then we evolved – evolution is natural. I couldn’t put a finger on what we’ve become now. We make what we love, which can be all kinds of music. ‘Punkadonk’ itself has a big genre mix, but the songs are all on the same wavelength.”

Elliot elaborates, “We’ve expanded the sonic palette but kept the STONE ethos right at the centre, and that’s what I find really rewarding about our creative process. We are taking risks sonically, but we’re happy with them, particularly as we’re home-grown and self-produced, which keeps our attitudes right at the core.”

For such a buzzy act moving into a pivotal portion of their musical careers, these four Scouse musicians are keeping things noticeably instinctual, which is brought to the forefront with a drum and bass offering on their debut project. Elliot recalls questioning himself on that significant shake-up. “Are we really doing this? I like to be kept on my toes and be in a position where we have the leverage to put out music like that. Putting out any song is inherently a risk as you’re exposing your art to the world, but it’s a risk we’re happy to take.”

“It’s a battle line being drawn – we are STONE”

Clearly, their risks have started to pay off – 2022 has been a year of huge live performances, attracting fans amongst the likes of Yungblud, Sam Fender, and Inhaler. All four band members have made an effort to not take any single opportunity for granted (“If we’d acted like that in the smaller venues, the bigger ones would never have come”), but now the hands being extended are becoming increasingly surprising. Amongst a busy first festival season, it’s the attention of Louis Tomlinson that stands out as a particularly unexpected highlight. The singer hosted his own festival, Home Away From Home, back in August, and STONE were specifically sought out to grace the boards of the Malaga music celebration.

“It’s good that he’s using his platform as someone who’s looking at indie grassroots fans and championing them, exposing his audience to bands like us,” Elliot asserts. “It’s a really powerful thing in a world where there are whole generations of legacy musicians who act like, ‘Kids nowadays aren’t doing it like we did it’. It’s good that he’s championing people like us – and we’re obviously happy with it.”

The two STONE representatives affirm their gratitude, although flying abroad and back in between sets at Reading & Leeds sounds like a challenge. “Louis is just a genuinely nice dude with a massive platform; that’s all it is,” Fin straightens out. “He decided to get us on stage, and we are grateful for that and grateful for the beer afterwards – he’s a sound fella.”

Any external support won’t define their voice, though, and Elliot promises that ‘Punkadonk’ will be a big step forward for the quartet. “We’re offering an eclectic blend of sounds; it is a real statement. It’s a battle line being drawn – we are STONE. Outside of the message of each individual song, it’s a great collection.”

Teasing that their sights are already looking towards the debut album, he restates the group’s thirst for an ever-growing slate of live shows moving forward. With a world of inspiration at their feet, “you never know when the next banger is coming around the corner.”