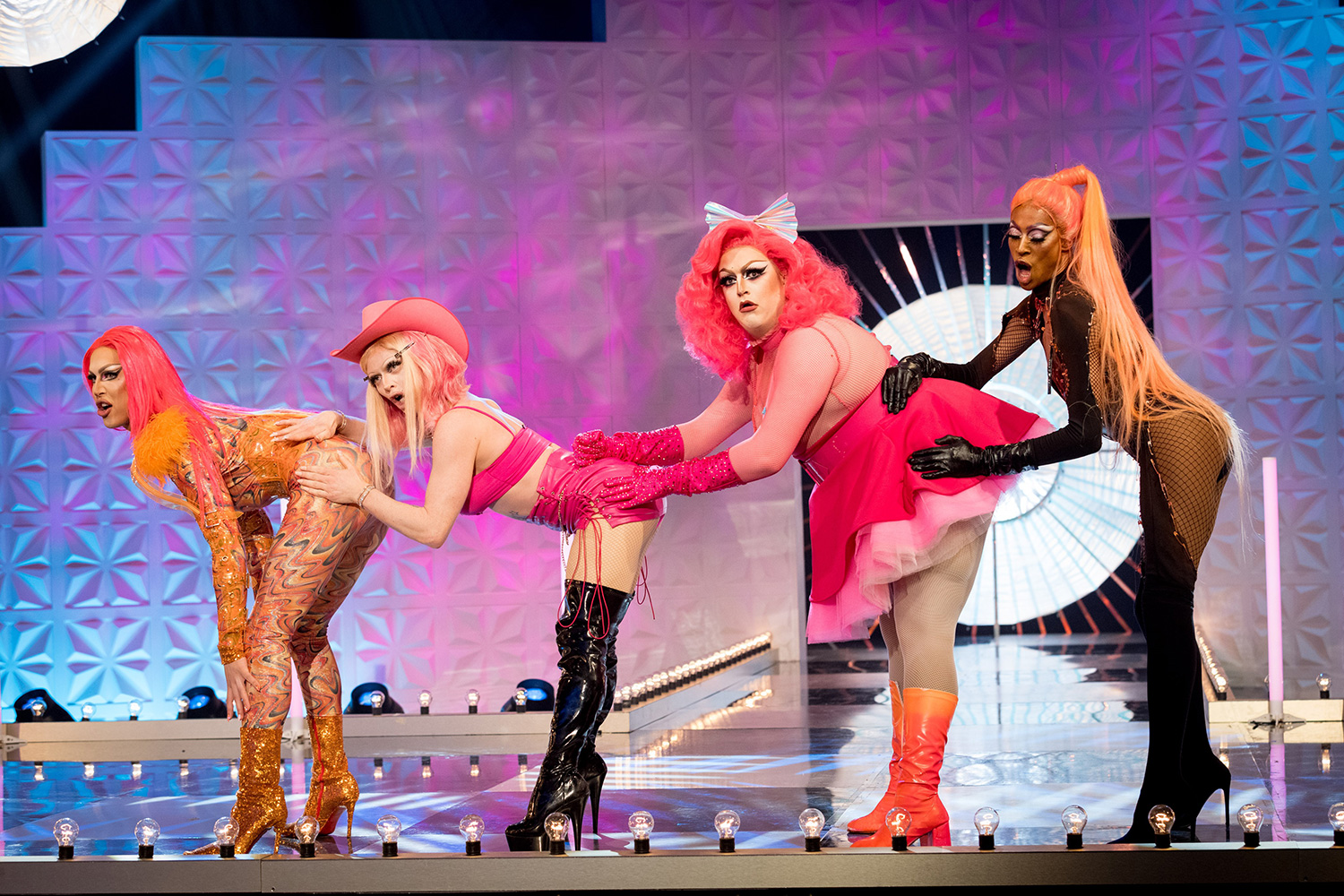 With a Top 40 single secured, and their places as winners of the week’s challenge and of the nation’s hearts in the bag, naturally UK, HUN?’s next stop is at Dork HQ.

If you’ve avoided the words bing, bang and bong over the last two weeks, you’ve done well. ‘UK Hun?’, the single by brand spanking new girl group United Kingdolls – that’s RuPaul’s Drag Race UK stars Lawrence Chaney, A’Whora, Tayce and Bimini Bon Boulash, BTW – has taken over the internet and rocketed up the charts since the episode aired, hitting number four in the midweeks and settling nicely at 27 as of Friday.

The track’s irresistibly catchy chorus was written by Leland (who’s behind bangers for Troye Sivan, Ava Max and Selena Gomez) and Freddy Scott (a long time Drag Race writer) and inspired by indisputable classics like ‘Supercalifragilisticexpialidocious’ and Crazy Frog, but the queens’ verses, penned in the Drag Race workroom for their challenge, are what brought the whole thing to life.

The song is bonkers. Nowhere else on telly, and later the literal UK charts, can you find a song with lyrics about lentils and trans rights in the same verse, plus some shade towards the UK’s love for clapping at 8pm, and not one but TWO key changes in the bridge. One simply cannot ask for more.

So with a Top 40 single secured, and their places as winners of the week’s challenge and of the nation’s hearts in the bag, naturally their next stop was at Dork HQ. We sat down with the one and only Bimini Bon Boulash (gender bender, cis-tem offender) and Lawrence Chaney (can’t sing or dance, but is still witty) to find out how they’re feeling about it all, their Eurovision future, and most importantly, who’d be in their animal band?

So you’re having a bit of a chart moment at the minute, how are you feeling?
BIMINI: It’s been a long time coming, but we’re here.
LAWRENCE: Yeah, it’s been a long road, but I mean, it is just insane, because I definitely didn’t go into Drag Race thinking I was going to be a hit singer-songwriter. But I mean, look, the United Kingdolls are now up there with Madonna, Lady Gaga, you know, hitmakers.

Yeah, it was like beating Ed Sheeran and Taylor Swift for a while.
BIMINI: I think that the lyrics “bing bang bong, sing sang song”, they just really pull on your heartstrings.
LAWRENCE: I mean, it is an emotional ballad.
BIMINI: But so much joy in it as well. Like it really takes you through feeling everything that you’ve ever felt and more.
LAWRENCE: Lies, lies. But honestly, you know, jumping off that, the song is so catchy. It’s so light and fluffy at a time when we really need something light and fluffy, something glamorous, something camp, something cheesy and fabulous like Eurovision. We need it right now, especially in this COVID madness.
BIMINI: I think as well, the songs not too serious at all. It’s just fun. And it’s silly. And like, it’s not going to be everyone’s cup of tea, but those people that can appreciate it and enjoy it do take it for what it is, and it’s just about having fun. And people that maybe don’t, it’s like oh just have a break, have a laugh, come on. If you’re not enjoying it, you just take yourself too seriously.
LAWRENCE: Yeah, chill out and have a sing sang song.
BIMINI: U ok hun?
LAWRENCE: Yeah, no, I’m actually really struggling.

Well, yeah, it is so catchy. It’s literally not left my head since the episode aired. But about Drag Race, even though it’s a huge show, it is quite niche, really. What do you think about this connected so well with everyone across the UK?
BIMINI: I think people that watch the show are already going to be the type of person with the mindset that they’re going to be a lot more open than someone that would disregard the show. And so I think the song, like I said, it’s about having fun, it’s about being silly, and I think people can really see the humour and the fun in that. And that’s what music is, it doesn’t always have to make you feel sad or angry, it doesn’t have to do that, it can actually just make you feel silly, and be fun and have a laugh. I think that’s what was so good about ‘UK Hun’; it allowed people to just be silly, that maybe don’t get that opportunity.
LAWRENCE: Something as well that is a great tribute to its success is that, in the song, we introduce ourselves, so even people that don’t watch the show, they don’t need to watch every season and every this and that because they know that Bimini likes it rough, but her lentils tender, I’m dancing to highland jig, A’Whora’s the fashion queen, and Tayce with the ratta tat rat imma clap back. It’s such a great introduction to all of us. So I think it stands out from the show, and it’s accessible to other people other than just the audience of the show.
BIMINI: It’s just great to be able to show the world my dietary requirements, but also my bedroom requirements.
LAWRENCE: Exactly.

And to be honest, “I like it rough, but my lentils tender” is the hardest bar of all time. So speaking about the verses, because you do introduce yourselves in them, did you want to say something that was kind of outside of yourself as well as introducing yourself?
BIMINI: I grew up listening to so much music, and some of that was British rap, like British pop-rap, but then also female rappers. So I love listening to rap lyrics that have metaphors and punchlines and kind of like a play on words, and that’s what I wanted to bring to the verse. I wanted to have metaphors and things that have double meanings, and it was just so fun to write it, but we only had so much space, and I could do a whole album if I wanted to, but I for this one, I just wanted to get a short message across that was quick, snappy, memorable, and I managed to do it. Like you don’t realise you’re going to do that until it comes out, and people really liked it, so it was great to see how it resonated with people.

And Lawrence, you said that you didn’t really come into the competition doing music or anything, but had either of you ever written anything prior to coming on the show?
LAWRENCE: I’d written like parody songs, so in the club, I’d do like a Margaret Thatcher act, where I’d change the lyrics of ‘Pokerface’ to like ‘Tory face’, and it’d be about spending people’s money, it would be like the craziest thing ever, but it was never serious. But I knew the avenue that I wanted to go down, because I love music as well, I’m just not great at, you know, if you want rap or singing from me, you’re not going to get it. I knew that I wanted to have a laugh and take the mick a little bit. That’s why I think me going first is great, because it starts off that kind of campness into the rest of the song, and it’s a great introduction.
BIMINI: I’ve written and recorded a song, like, over a year ago, where me and my friend was just having a laugh, and I’m always writing stuff, there’s never really a particular rhyme or reason for it.
LAWRENCE: Well, there is a rhyme…
BIMINI: There is a rhyme, but there’s a lot of the times I just write little quirky things that come into my head. So I really enjoy it, and I’m actually going to be doing a lot more music stuff as well, so I’m very excited for that.

Nice, and are you going to do more together as United Kingdolls as well?
LAWRENCE: I would, yeah.
BIMINI: Yeah, there’s lots of exciting stuff come in. So everyone, stay tuned.

If you could swap verses with any of the queens on your track or on the Bananadrama version, who would you pick and why?
LAWRENCE: I’m surprised you know the name of the other group. I love Tia’s; her verse was really good. Bimini’s was like amazing. But I like it rough, but I don’t like my lentils tender. So I’d struggle delivering that line, you know?
BIMINI: You like yours straight out the packet.
LAWRENCE: Yeah. Funnelled in.
BIMINI: I think I would like A’Whora’s delivery. I loved her sex appeal, and I thought it was genius to stick ‘a’ on the end of everything to make it rhyme.
LAWRENCE: Oh my god, yeah, words that don’t even have any place being in the same sentence.
BIMINI: A’Whora, Dora, Bora.
LAWRENCE: I’m logging on to Quora.

Yeah, obviously she’s not here, but what happened to like the super sexy like moaning thing A’Whora was doing in the recording clip?
LAWRENCE: I think they probably wanted it not to sound too porny, that was the thing. We definitely wanted it to be accessible, because the lyrics are nice and playful; we wanted the song to be nice and light and accessible to younger people as well. So I think A’Whora learned to not moan as much.
BIMINI: I don’t think she learned not to moan as much but yeah.

And Lorraine was a judge that day, she’s kind of said that she wants it to be the official Eurovision entry for the UK. What do you think about that?
BIMINI: Still waiting for the phone call, but if it does ring, I’d be up for it, would you Lozza?
LAWRENCE: Absolutely, we’d do anything. Eurovision is the gay Superbowl, so we would absolutely do that in a heartbeat.
BIMINI: And if there’s budget and costumes, amazing.

I also have a question to ask on behalf of one of our other writers. He asks everyone he interviews, if you had an animal band, what animals would be in the band?
BIMINI: Flamingo would be me. Yeah, me as a flamingo, I think a zebra because it’s gay horse. Oh, and one of those big sexy fishes that are in the sea, the sexy and kind of tropical ones that are very colourful. One of those.
LAWRENCE: A mermaid?

UK, HUN? is available to download and stream now on all music streaming platforms, from World Of Wonder records. Download the track on iTunes here.

Courting are this week’s special guests on Down With Boring