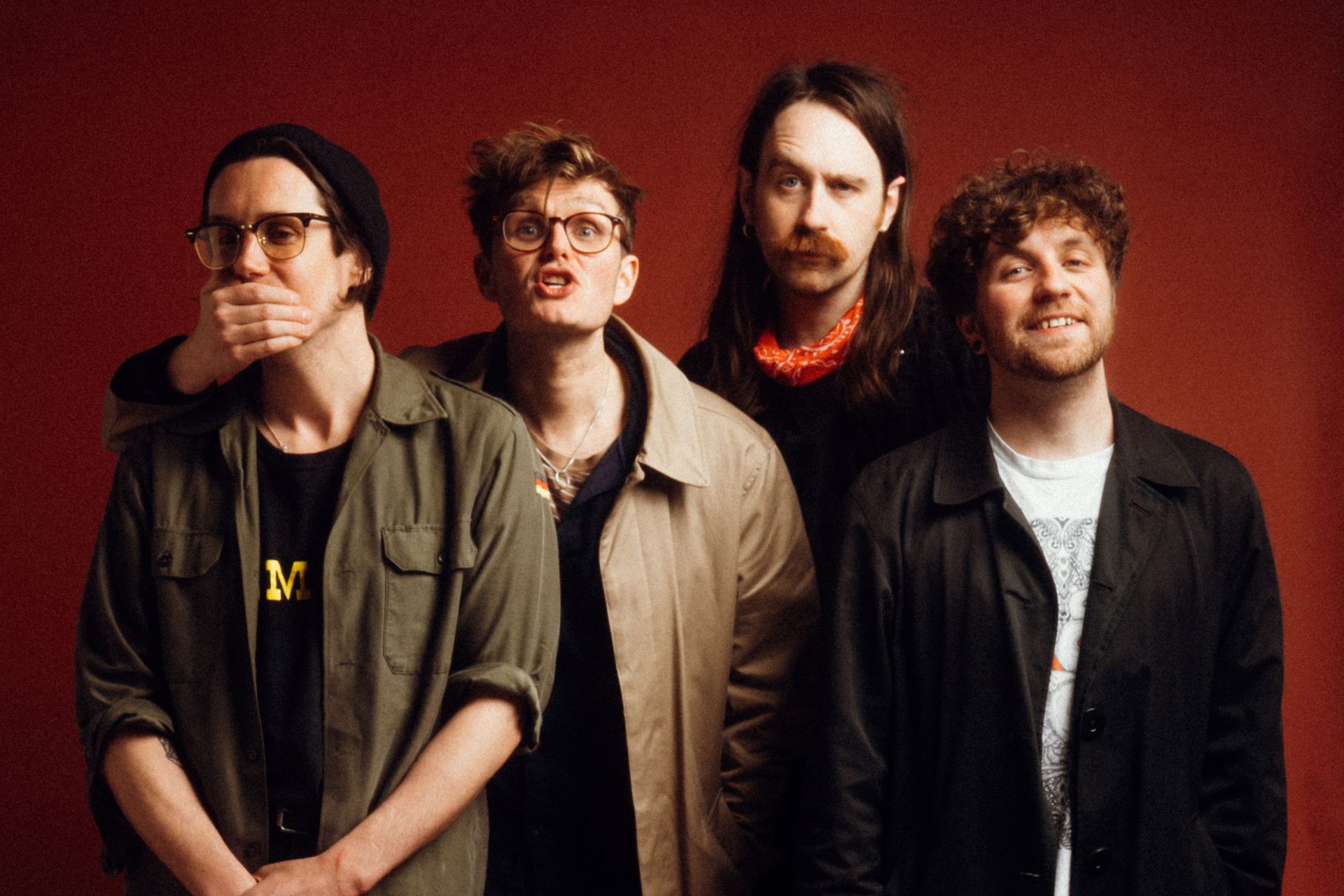 Yard Act: “I don’t think you can write about modern society without being political”

Breaking out of Yorkshire with their tongue-in-cheek but absolutely spot-on social commentary, Elton John’s favourite new band (yes, really) Yard Act are kicking off 2022 with the release of their debut album.

James Smith is knackered, and who can blame him? While every other band under the sun has had their plans consistently uprooted this past couple of years, his group Yard Act have been exclusively on the rise, and busy for it. Since dropping ‘The Trapper’s Pelts’, their crunchy and pervasive debut single mere days into the very first Covid lockdown, praise has rolled in nonstop, from A-list radio slots to celebrity nods from Cillian Murphy and Elton John. More recently, the foursome landed a coveted spot on the BBC’s Sound Of 2022 shortlist alongside fellow buzzy newcomers (and Dork faves) Wet Leg and Baby Queen. Not bad for the write-off year that was 2021.

It’s about 10pm when James answers the phone from the back of a tour van, not long after a trip to France left him with food poisoning. “I’ve been run pretty ragged,” he says, though from his chipper tone, you couldn’t tell.

The band grind life is one James is accustomed to. In the not-too-distant past, he co-helmed Leeds outfit Post War Glamour Girls around the same time as bassist Ryan Needham’s tenure with scuzz-poppers Menace Beach. When Ryan moved into James’ spare room in 2019, Yard Act was born.

“At the time, it wasn’t intended to be what it’s become,” James recalls. “It was basically both of our side projects. A bit of escapism. A way to drink some cans and pretend we were Guided By Voices.”

“I doubt myself constantly, and I don’t know if what I think is right”

The rest of the story is simple. The duo amassed a collection of demos, tentatively dropping ‘The Trapper’s Pelts’ in April 2020 after realising the pandemic “wasn’t going to be a two-week thing”. Three more tracks followed, garnering a ton of hype for their heady arrangements and James’ wry lyrics that satirise Britain today and the people who populate it. As the country languished, Yard Act, completed by guitarist Sam Shjipstone and drummer Jay Russell, knuckled down to craft a debut album. Enter ‘The Overload’.

Laced with comedy and authentic, informed opinion in equal measure, ‘The Overload’ tackles big-ticket social issues through James’ stylised penmanship. Sometimes it feels like the first draft of a political manifesto, at others, a parodic soap opera. So, which is it?

“I don’t know if it’s a protest record,” James says, pausing thoughtfully. “That’s one way of looking at it. It has multiple meanings; you can dig as deep as you want. I’d say it’s a document of where I’m at personally and, I think, a snapshot of how I see the UK right now.”

Social politics have been the overriding theme in Yard Act’s music thus far. On ‘Trapper’s’, James trained his crosshairs on uber-rich types over a crashing instrumental. On ‘Fixer Upper’, he channelled a character called Graeme, a caricature of a new-money man complete with racist tendencies and an old-school masculinity complex. ‘The Overload’ follows these threads outward, examining gentrification (‘Payday’), cancel culture (‘The Incident’) and class identity (‘Quarantine the Sticks’). But despite James’ knack for prickly one-liners, the record observes more than it judges, leaving blank space for the listener to fill in themselves.

“My standpoint on writing up until now [has been] social observation. I don’t think you can write about modern society without being political because politics interferes so much in the fabric of daily life. You’d be hard-pressed to document a society without talking about how politics influences it. During the lockdowns when a lot of [the album] was written, I was closely following Black Lives Matter protests and what happened with George Floyd.” Affairs closer to home weighed heavy on his mind, too. “The government were on the telly every day, and when you don’t fuckin’ trust ’em,” he chuckles, “they’re pretty much on your radar constantly.”

‘The Overload’ wears its affiliations on its sleeve (let’s just say, Tories, this probably isn’t the album for you). But its intent isn’t to preach, James explains.

“By default, it’s political, but I don’t think I ever had any intention to reinforce my own views through my writing. I certainly had no interest in reinforcing a listener’s views by telling them what they already agreed with, so I could gain attention for money, I guess. ‘Cuz there are bands that do that, and they make a living out of it, and it makes their fanbase happy, and it probably makes them really happy. I doubt myself constantly, and I don’t know if what I think is right. Everyone always thinks they’re right, don’t they? That’s how humans work. I’ve never met a human who actively thinks that they are wrong. Because you wouldn’t think something if you thought it was wrong, you’d think summat else, that’s how your brain works. Sorry, I’m going off on a tangent here…”

More recently, he’s stopped following the news in an attempt to quell the constant anxiety so many doom-scrollers face from trying to stay updated.

“Knowledge as power and to have an educated view of what’s going on is a sensible thing to do. But it’s a very bleak thing to keep looking at. It’s fine not to know exactly what terrible thing has happened in the world on this day at this moment. You don’t achieve anything by knowing it.

“You have to remember that the news decides what it wants to tell you,” he continues. “It’s not the whole picture; it’s what the news decided to tell you that day. I don’t know what’s going on in Afghanistan now. No one’s mentioned the Taliban takeover for the last two months.” Words pop off his tongue like lines from a John Cooper Clarke poem. “For two weeks on end, it was all anyone cared about and then no one’s mentioned it since. You have to be really fuckin’ aware of how the news works in that sense, I guess.”

Musically, ‘The Overload’ takes the appeal of Yard Act’s first tracks and amps it up to eleven, drawing on Britpoppy influences like Pulp and Elastica as much as their post-punk predecessors, The Fall et al. At times, Yard Act cavort with choppy tempos (‘Dead Horse’, whose hip-shaking hook is even more contagious than Omicron, ‘Payday’, which tactfully jabs at gentrifiers and virtue-signallers over a bonkers concoction of bass and bongos) but they also dial down the smarm in favour of slow-burning sincerity: ‘Tall Poppies’ is a six-minute episode that traces one Average Joe’s life from birth to death, not passing judgement in the way 2020’s ‘Fixer Upper’ might have, merely observing. Finding solace in the bigger picture is ‘The Overload”s optimistic aftertaste.

“I think that’s what [the album] is about, essentially, even though it uses the current state of the UK as a lot of jump-off points. [‘Tall Poppies’] is about zooming out and saying, y’know, don’t get bogged down in the details of things you can’t control. Look at the bigger picture, realise how insignificant you are, and make the most of the moment you’re in.”

“I think it’ll get a little bit worse before it gets better, but I do have genuine faith in the future”

Glancing to the future, it’s unlikely James will face a shortage of writing inspiration any time soon. He is, however, cautiously optimistic for the country and the people who inform so much of his creative output.

“I’m beyond understanding how the world isn’t at the fucking door of 10 Downing Street demanding he leaves.” His vitriol for the current Prime Minister crackles down the phone line. “The more he got away with [last year], the more I was like, I don’t know what more energy I can give to this. I didn’t want to become defeated by it, but I was like, right now, I need to preserve my energy for when the revolution comes.

“I think it’ll get a little bit worse before it gets better, but I do have genuine faith in the future, in the youth of a lot of the world. You know, I’m not old, but I’m not young; I’m 31, and I kind of see myself as a skipped generation. It won’t be my turn to rule the world in my future, but I’ll have to support the generation below me when the time comes.”

He himself has a young child at home.

“It feels like we’re looking at our clocks waiting for a bunch of old fucking dinosaurs to die, and they’re taking their time doing it. But I think the kids are alright. They’re a lot more proactive than my generation were. And I am an optimist overall; I have always been. I wear a smirk on my face and make a joke out of everything as a defence mechanism, but I do genuinely think that people are okay when you get down to it. We still have a chance to change and adapt as the future unfolds. That’s the great thing about the future: no one knows how it’s gonna go, so you always have to believe in a better version of it.”

Taken from the February 2022 edition of Dork, out now. Yard Act’s album ‘The Overload’ is out 21st January.