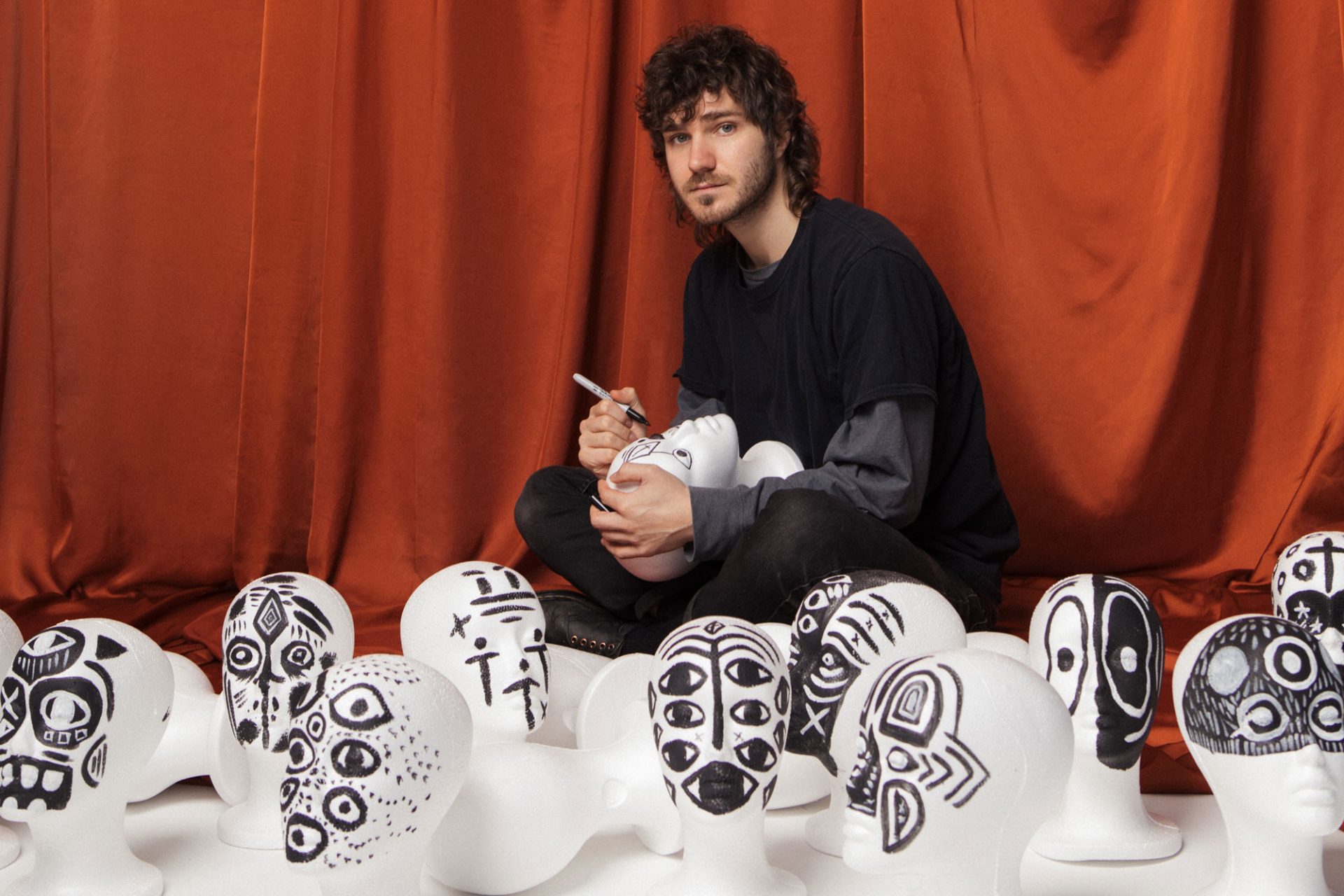 Covey: “If you’re already evil, they probably won’t have much use for you”

Are you ready for Brooklyn-based and British-born singer-songwriter Covey? Because he has a lot going on with his debut album, and it’s quite a bit to wrap your head around. We’d very much recommend putting the kettle on. Just as life advice, really. But also right now.

Basically, right, ‘The Class of Cardinal Sin’ has a concept running alongside, which – in addition to featuring on the record’s artwork – comes into its own with tiny TikTok vignettes full of odd characters, tales from their lives and a theme tune we’ve been unable to shake for weeks. But you see, that’s not all – the characters are all dead and have been taken against their will to a school that’s going to teach them to be evil.

At least, that’s what we think is happening? Thankfully Covey’s here to tell us more about… everything.

What were your early days getting into music like? Did you grow up in a musical household?

I did not grow up in a musical household at all! I think my only family member that played an instrument was my cousin. He played guitar, and I thought that was pretty nifty. So when I was about 13, I asked my parents if I could have guitar lessons and did that for a few years and then once I learnt the basic chord shapes, I started piecing them together myself; I stopped taking lessons and just kind of ran with it, trusting my ear along the way.

Was there a specific moment when you realised you could give this being-a-musician thing a proper go?

Yes! It was probably after I started my first band, and everyone else was taking it half-seriously, gravitating to other things as we finished high school, and I had no interest in doing anything other than music. Then when everyone was picking schools, I had no interest in going to college at all, but alas, I had to appease my parents, so I took a stab auditioning for music school, just the one, and ended up getting in! From that moment, I was set on becoming a professional musician in some capacity, whether it was through being a producer, songwriter or an all-inclusive artist. I ended up going big and choosing the latter.

You’ve had a couple of albums out already, how did you find those releases? Were they quite DIY?

Very DIY, I’d say. I funded the first record myself and recorded with a small studio in Boston called Mystic Valley Studio. Recorded it all via tape, and then the second one, I recorded myself working closely with Saguiv Rosenstock to finish it off.

Was the process of putting together ‘Class Of Cardinal Sin’ different?

Not too different, I recorded everything myself then worked with a mixing engineer named Jake Cheriff to finish it off. So very similar to the previous record.

This one’s got a bit of a concept to it, right? With… an evil school system? And dead characters? What’s going on??

So the topic of the record is all about my own upbringing and my experiences in high school as well as a heavy emphasis on home life during that period. The stories and premise of the school has been a concept in my head for a while – hence the mention of the fox dating all the way back to my first record – but the story itself with the evil school and dead characters took on a life of its own with this record and grew into a massive concept that is referenced on this record, but not all-inclusive if that makes sense.

Is there a way to avoid having to go to the Class Of Cardinal Sin? What if you’re already a shitty person?

You actually only get sent to the Cardinal Sin if you’re an inherently good soul that is scouted by either an alumnus of the school or a recruited “Cult” member living in the mortal realm. So if you’re already evil, they probably won’t have much use for you (their whole thing is converting good people into evil people) and would probably just look on at your evil ways in admiration. If you die, you’d just be sent to the death realm, not the Class of Cardinal Sin.

Are any of the characters based on yourself?

I get asked this question a lot! I used pieces of myself to write the background for each character, for example, Benjamin’s home life, Jamie’s love for animals, Alex’s sleep disorders, Penny dealing with cancer in the family. It was all taken from my own experiences or experiences of those who were extremely close to me, so it’s hard to pick one that I relate to most because the question essentially becomes “which experience in your life, most defines you”, of which anyone would have a hard time narrowing down to one. So to answer your question, they are all based on me, so I identify with them all!

This whole ‘popular on TikTok’ thing that’s happening at the moment must be weird, has that had a tangible impact for you?

Definitely. Vitality, although unsustainable, creates amazing opportunities, and those opportunities will become more apparent in the next few months. But yes, it’s definitely weird, haha. I am eager to get back to some good old fashioned live shows and touring, but even that, I will be documenting via TikTok, so it’s definitely changed my life in more ways than one. To be honest, I thought my career was going to take a giant nose dive and absolutely would have if I just went dark for a year and a half. I knew I had to try and do something to bridge the gap, and it was easily the best decision I could have made.

What else have you got going on at the moment?

I just moved apartment. As restrictions are being lifted here, I am seeing more and more of my friends that I’ve missed throughout quarantine. I am extremely excited to be heading out on tour again in September with Summersalt and potentially heading on our first international tour in 2022 – no promises, but we are working towards it! P

Taken from the July 2021 edition of Dork, out now. Covey’s debut album ‘Class Of Cardinal Sin’ is out 18th June.