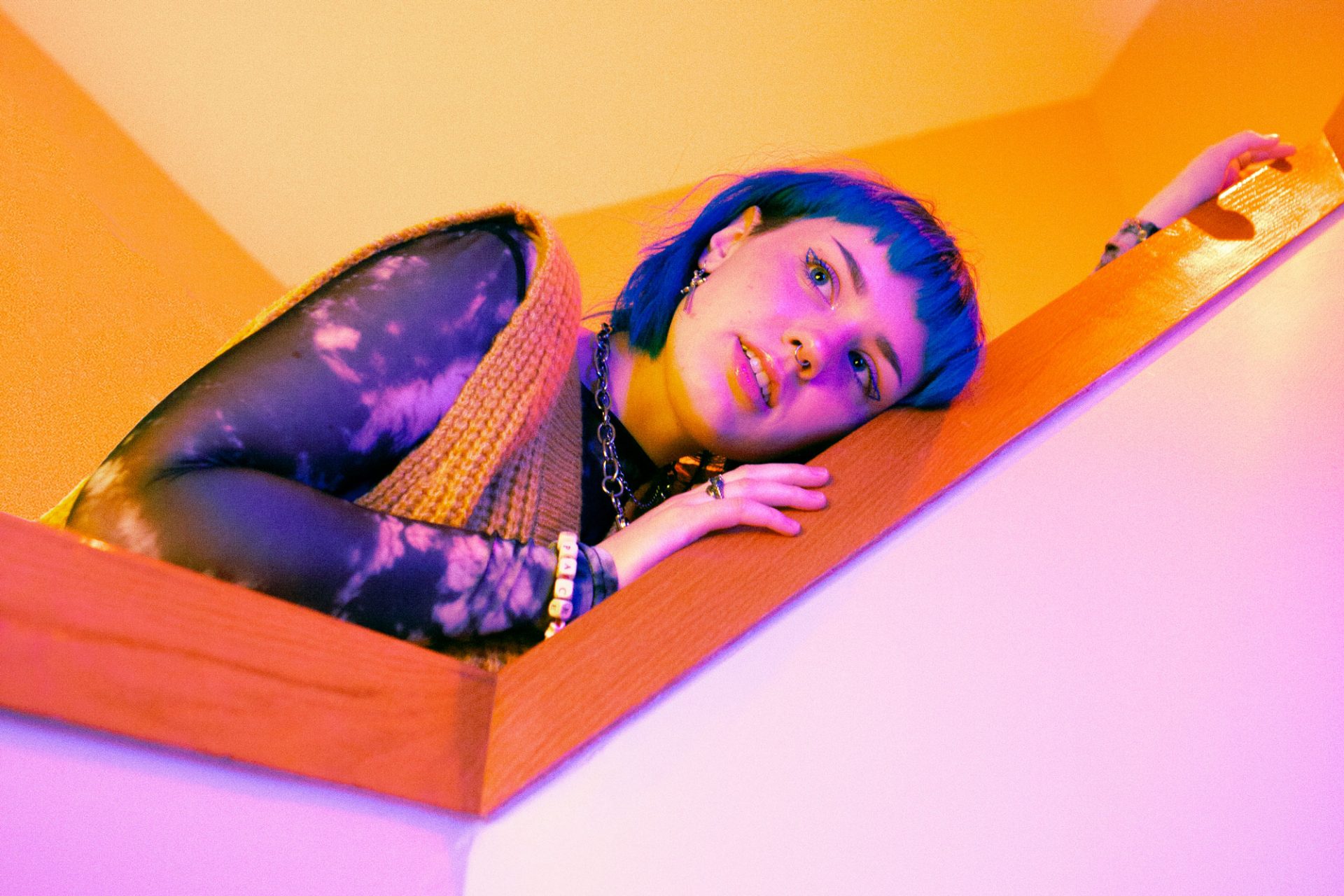 Frances Forever: “I had to make a project to really show people what I can do”

This is shaping up to be a landmark year for Frances Forever. Not only are they readying their second EP to follow the mega worldwide success of viral sensation ‘Space Girl’ and finally play shows in front of real actual human beings, they have also just graduated from college and are ready to take the leap from bedroom ukulele strumming student to bona fide alt-pop icon in the making. For Frances, the past couple of years have been quite the journey.

“It’s been really interesting seeing where this takes me,” they begin on the day following their graduation. School is quite literally out for summer, and, indeed, forever. “I used to just write songs on one instrument like the ukulele or piano in my room and film YouTube videos. Then I met my producer in college, and they showed me this whole new world where you can have so many different instruments. You can make these drums sound really human-sounding. You can have an entire band, and then I made a band in college. Having more doors open with writing style has been really cool.”

The development and expansion of their writing style is immediately apparent in the leap between 2018’s homespun lo-fi debut EP ‘Pockets’ and the evocative soaring confidence of ‘Paranoia Party’, in which Frances’ songwriting reaches new levels of excellence. “The difference between my first EP and the EP coming out now is that I was more experimental with all the sounds that I could use,” they explain. “’Paranoia Party’ is my favourite song that I’ve ever written,” they say of the title-track, which acts as a strong statement of intent.

The success of ‘Space Girl’ contrasted starkly with the situation in the world as everything shut down while Frances’ song blew up. It makes for a disorienting experience. “It’s been strange,” Frances reflects. “I see the numbers, but it’s hard for me to put a face to the numbers. We’re in the middle of a pandemic. I’m sitting in my apartment and going to college. I have a normal life. Every day people would be like, I love your song. That’s so odd but so cool. I feel like Hannah Montana!”

‘Paranoia Party’ is the first step to Frances’ climb to global success and acts as a significant step forward. “I had to make a project to really show people what I can do and what I want to do,” they explain. “My first EP was called ‘Pockets’ because it’s like pockets from my life from when I was 16 to 19. This is more like a full concept, me as an artist. This is what I’m saying, and this is what I’m about. A lot of my identity is in my music. It’s incredibly personal.”

The EP deals with big feelings in a brutally resonant way. There’s no mystery here, just pure feeling. “A lot of it is about mental health and being in the world when there are other people that feel exactly the same way as you,” says Frances. “It’s about trying to find community and find a home while feeling that you don’t really have a place quite yet in the world. I want my music to be that place for the people that feel along and say, ‘Hey, I’m feeling the exact same thing that you’re feeling, let’s all sing about it together and cry’.”

Forging and nurturing those relationships with their community and the marginalised and underrepresented is central to Frances work. There’s a sense of a real movement coalescing around them, which is about more than just the music. The coolest thing to come out of ‘Space Girl’s’ success is getting DMs and seeing people make their own art,” enthuses Frances. “’Space Girl’ has become something way bigger than me. It’s like an entire culture from the amount of art made from it. It’s the coolest thing ever to have added something to the world that impacts a lot of people.”

Frances really feels the music on a deep level. “It’s an emotional outlet for me and for everyone listening to the songs because everyone has felt that way and been through that,” they say. The desire to tackle universal feelings and emotions is forged from Frances’ earliest musical loves of Mitski and, in particular, Taylor Swift. “I grew up with a lot of Taylor Swift, and she encouraged me to start songwriting. She’s an incredible writer. My music taste has grown with her music.”

There’s an engaging natural quality to Frances’ songs. Nothing feels forced or calculated. There’s a raw intensity to their music that cuts deep. When the inspiration strikes, the songs just pour out. “There was one time with the second verse of ‘Space Girl’ where it came to me in the middle of the cafeteria in my school,” laughs Frances. “I had a voice note where I was whispering and trying to get the melody out without seeming like a crazy person. I’ve written songs at 4 in the morning. It just happens when it happens. You have to turn on your voice notes, and it’s like, ‘Here we go!’”

Like many artists who have been on the rise during the pandemic, Frances hasn’t yet had the opportunity to properly play live and experience the thrills of being a proper working artist. “A part of me still thinks that everything is going to stop and everything’s going to go back to normal at some point,” they confess. Somehow we think that’s unlikely. Instead, Frances is setting their sights on realising their long-held ambitions. “I want to make an album,” they proclaim confidently. “I’d love to collaborate with some of my favourite artists and do a world tour. It’s been a goal since I was really little to travel the world and play to people.” There’s an adoring audience waiting patiently to see Frances Forever in the flesh for the first time, and they’re finally ready to bring the paranoia party to the masses.

Taken from the August 2021 edition of Dork, out now. Frances Forever’s EP ‘paranoia party’ is out now.