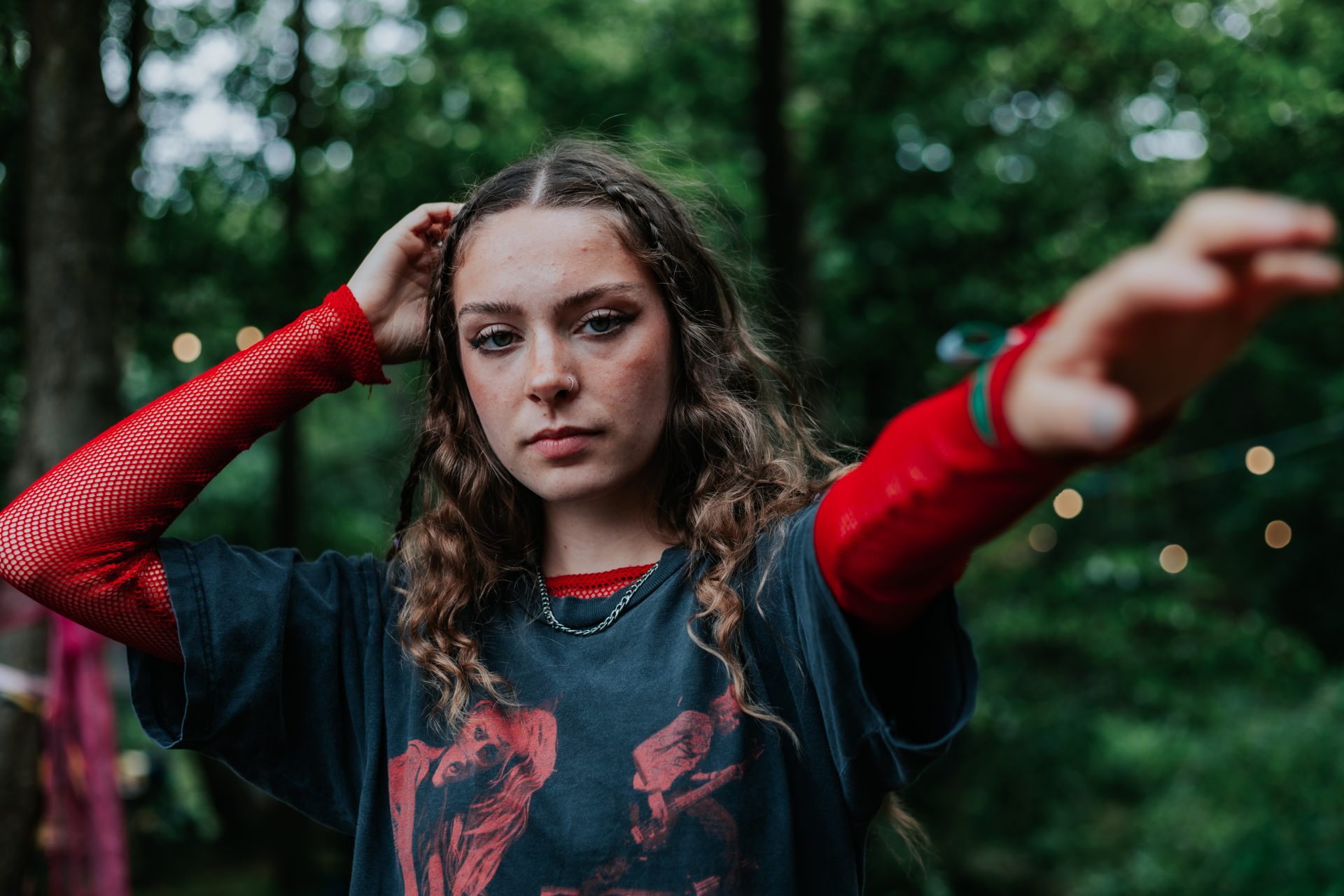 Holly Humberstone: “I feel like saying ‘I’ve got an album’ is a bit scary…”

Holly Humberstone is working towards her new EP, with plenty more to come…

Anyone still dreaming about Bon Iver and Phoebe Bridges lovechild? Your prayers have been answered in Holly Humberstone. If you haven’t had a chance yet to convert into a follower of this 21-year-old doom-indie sensation (and why not, she was on the cover a couple of months back! I ask you – Ed), a new opportunity waits around the corner. After getting all the buzz, critical acclaim and heated hype from fans falling for her heartfelt lyricism, Holly is on the cusp of releasing a second EP. For those who simply can’t wait any longer, we meet Holly backstage at Latitude to talk about the new record, writing with Matty Healy and her soul-touching creative practices.

Hi Holly, how are you? Excited to play tonight?

I’m just really happy to be back at the festival, and the atmosphere is really good. Everyone is just happy to be out and seeing live music again. I’m really excited about today.

Your second EP is coming out soon, can you tell us a bit about it?

I wrote the EP over the last twoish years, so a lot of it was put together throughout lockdown, and some of it was put together before. I feel like my first EP is a time capsule that I wrote when I was still living at home, just leaving school and going through those types of experiences. This next EP feels like the next chapter and everything that came after that. I released the song ‘Haunted House’, which is about leaving home and also about moving to London and having a bit of a weird time in the flat in London. I guess the EP is just about things changing in my life, and I feel like I’ve been in a sort of in-between stage. Between being a teenager and then moving out, relationships and things like that. Experiencing all of those things for the first time. Just working through all these weird emotions and feelings. Two songs are already out, ‘Haunted House’ and ‘The Walls Are Way Too Thin’. There should be a song out – maybe, I can’t confirm or deny – in August, which I’m really excited about. Hopefully, the rest of the EP will be out later in the year. I’ve just had loads of fun writing it.

Was the process of working on this record different than on your debut EP?

It was a bit different because a lot of it was done over lockdown and finished over lockdown, but I tend to write in the same way. I wrote bits on my own and bits with a collaborator that I worked a lot with called Rob, who I really trust and feel really comfortable with and can be open with. It’s always really fun, going into the studio and writing with Rob. I’ve a lot of collaborations with other people that I really admire as well.

One of these collaborators was The 1975’s Matty Healy, right?

There’s a lot of bad things that came out of this last year, but also there were some positives as well because people that would usually be out, very busy touring the world and doing rock star stuff, have been at home. I was like, ‘you got free time because there’s a pandemic going on, so please come and write with me’, and he was really lovely. I feel like I’ve learnt loads from working with him and seeing how his creative process is. It’s just been a really nice process, and I’m proud of everything that we made.

Is there any backstory to the song you co-wrote?

There’s not much of a story. The studio I was working at is one that he knows, and it’s kind of local. He was just down to write and to meet people. He was like, ‘I like your music; let’s work together’. I’m such a massive fan of The 1975. I love them. It was really surreal because I feel like quite a lot of these songs I’ve been listening to as I’ve grown up and had a lot of experiences with them. They have a lot of meaning for me, so it’s really special getting to meet him and see how he works. We just wrote a song. He’s got some crazy fans. There’s some way of finding a song that’s been registered to be published, registered to be released. It was registered a few months ago, and they managed to find out what the name of the song was and that we collaborated on the song and that we did the song together. I think I’m allowed to say because the cats are already out of the bag; it’s called ‘Please Don’t Leave Just Yet’.

Was there anything that you’ve been obsessively listening to while working on the EP, or anyone that kept on inspiring you?

Of course. Phoebe Bridges, always. I’m obsessed with her. Kind of in love with her. I remember her album coming out midway through the lockdown last summer. It just completely saved me. It was so inspiring. Just love her honesty and the brutality of her lyrics. She’s kind of savage, which I love. I’ve been really inspired by 80s music. I love Prince.

Talking about Phoebe Bridges, you share similar emotionality when it comes to your songwriting. It’s raw and in-depth. Does this vulnerable way of writing come naturally to you?

For sure. I feel like I’ve always written for myself, and I’ve always used writing as a way of working through things. A lot of the time, I’m not sure how I feel about something that I’m going through before I’ve written a song about it and then writing the song helps me work through the feelings but in kind of a simple format. The song is clear, and it’s me trying to filter everything I’m feeling and put it into a concise bit so I can understand a bit more. I’ve always done that. I can’t remember when I started writing, but I was really young. I was probably around seven or something. I used to write about things going on in primary school and boys I fancied and stuff. It’s always been my safe space. My comfort zone. I write for myself; that’s why everything seems really honest because I’m genuinely trying to figure out how I feel about stuff.

Is it a kind of self-therapy for you then?

Yes, it’s my safe space. I’ve also found that a lot of this EP has come about in the last two years when I was going through a lot of changes in my life, like leaving home. Just so many changes that you go through as a young adult moving out of home and experiencing all of these things for the first time, and I feel like writing is my comfort zone, and it’s kind of like the one constant that I’ve been able to come to with all of this confusing shit going on.

What are you working on now?

The EP is coming out in the autumn. It’s been done for a few months, so I kind of put that to bed, but I’m really excited about it coming out, and I’m just really enjoying having time to write songs and just experiment. I got time now because we can’t go abroad. We can’t really tour yet. I’ve been enjoying writing whatever I like to see what happens. Not really going in with much of a plan. Just seeing what I want to do and messing about in the studio, which is really fun, and hopefully, maybe, I’ll start to put together an album, but I feel like that’s a big commitment for me. I feel like saying ‘I’ve got an album’ is bit scary, so we’ll see. We’ll see.

So many people have started to connect with your music on a deep level; what’s your response to the community growing around you?

I find it really bizarre. It’s been weird because I’ve only realised now that I’ve got back to playing again, I did a festival yesterday, and it was just weird seeing all of these people, few people on the front row knowing some of the words. It’s surreal for me because apart from over the internet and over my Instagram DMs or YouTube comments, I haven’t really been able to believe that it’s real because I’ve never seen anyone in real life. It’s weird because I haven’t met anybody really, apart from my family and my friends that really like my music.

You will definitely feel that love from your fans tonight.

I hope so. It’s really lovely to meet everybody. I feel like that’s kind of a new trend which is a good trend of young female writers that are just being really, really brutally honest and talking about things that people don’t really wanna share. Kind of oversharing. It’s a really good thing, and people need to talk about how they’re feeling and mental health. Issues are probably intensified during this past year. They have for me anyway and people that I know. It’s important to talk about it, and it’s a good thing that people are being so vulnerable in their writing.

Taken from the September 2021 edition of Dork, out now. Holly Humberstone’s new EP ‘The Walls Are Way Too Thin’ is out 5th November 2021.