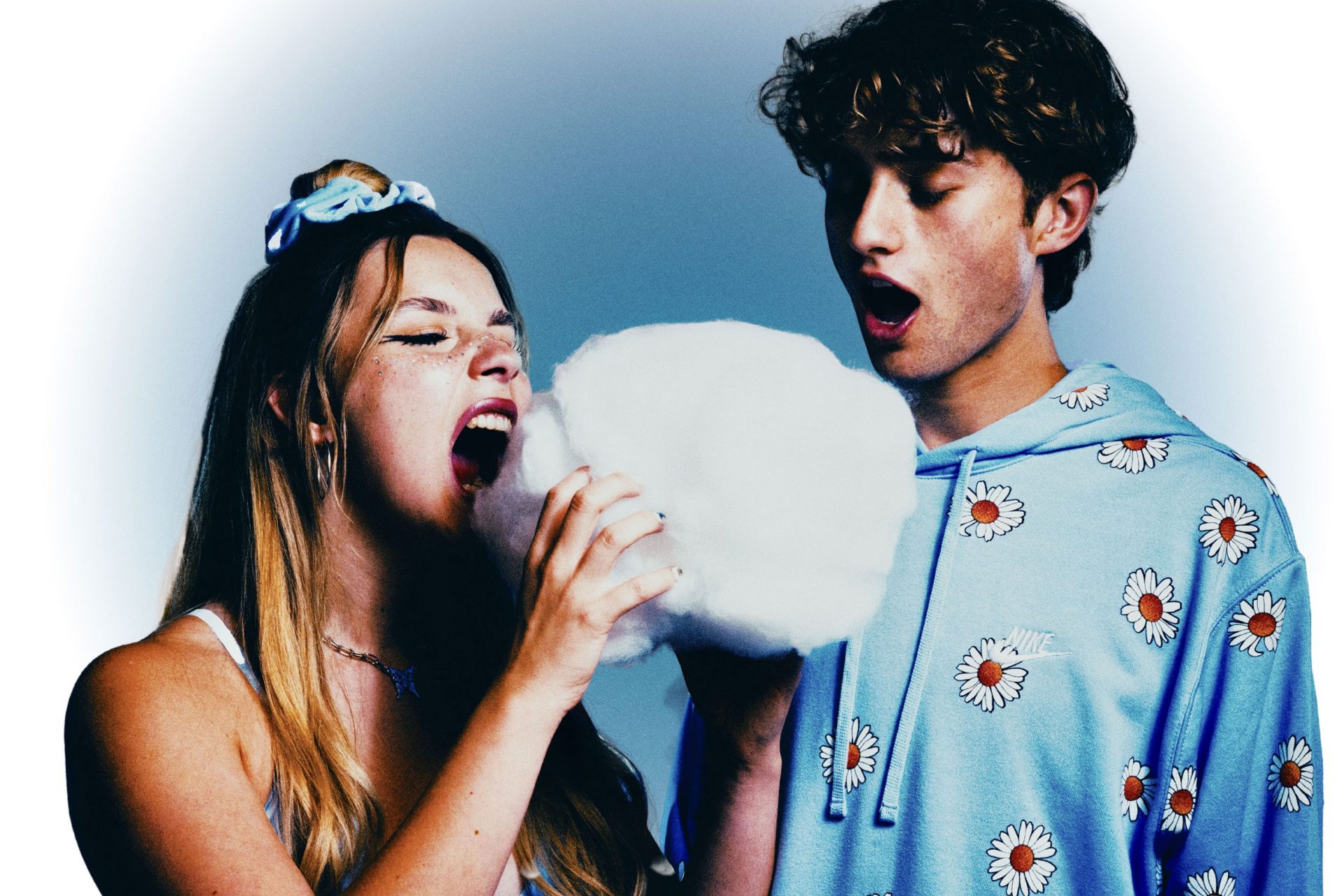 The duo bringing the biggest bops.

Hype List inclusion already feels somewhat overdue for Sophie McBurnie and Tommy Villers, whose piri & tommy moniker has already taken the world by storm. From having never played a live show to walking the boards of Glastonbury, Reading & Leeds, Boomtown and many more within a rapid-fire twelve months, it would seem as if all their dreams have come true – and they have, although things are not always so simple behind closed doors.

Looking back to the duo’s beginnings, then – piri & tommy met through Instagram DMs while the latter was still a member of genre-bending four-piece Porij. With the former having no experience in recording or releasing music of any kind, things quickly became overwhelming.

“I was living in a house with people who went to music college and, as a non-musician, if you just walked into that house and heard people playing drums and guitars in every room, it must’ve been like… oh god, what am I in for?” tommy admits of the intense induction into his world.

“I wrote very much as a side hobby,” piri recalls. “I really liked it, but I was so shit at guitar that I couldn’t even take myself seriously. I didn’t consider myself a musician. After ‘soft spot’ dropped, I could see that people liked the songs I could write, and that caused a big shift in my confidence. Now I feel really good about it.” (“Slay” – tommy.)

It is quickly apparent that the pair’s skills and experience perfectly balance each other’s weaknesses; tommy’s production prowess gives piri a fluid framework to rely on, while she supplies a natural voice for the feelings they both share. This relationship directly translates into song, with ‘easy’ detailing the comfortable moments and ‘words’ paying tribute to some tougher times.

“As you’d expect, being this close and making music together can be a double-edged sword,” piri confesses. “We can communicate exactly what we mean without any difficulty or worry, which is helpful for the project but can also be jarring or frustrating when your intentions don’t align.”

One place they’re always on the same page is the live stage, with a blistering number of performances cultivating a honed approach to each set. “The first time you got on stage, people already knew your songs – that put a lot of weight on your shoulders,” tommy converses. “You’re really excited to do gigs now, though; you’ve come so far.”

“The more special moments you can create that people can go away and look back on, that’s what makes a show truly special and memorable,” piri says from experience. “The music is the central focus, and we care a lot about how we sound, but it’s not all about that – it matters how people experience it as well.”

These shows have brought the huge TikTok numbers the pair have racked up into reality, morphing formidable digits into countless bodies. This isn’t an outcome that either musician were entirely confident would materialise. “One track blowing up doesn’t translate into a solid reputation,” piri clarifies. “You have to establish yourself by releasing a lot of good music so people can back you and trust that you’re going to put on a sick show.”

With their formidable debut project, ‘froge.mp3’, piri & tommy have done just that. With twelve bangers under their belts, there is sufficient material to have complete faith in the act going forward. Despite making the most of that long-form format, the two 23-year-olds are still spurred on by the chaos of their generation that is evidenced best on social media. Pushing aside any industry pessimism, they connect authentically with their fan base and find inspiration amongst peers in an arena only the youth are placed to understand.

“piri’s the brains, I’m the vibes”

“When you enjoy [TikTok] as a user first and foremost, it gives you a different perspective,” piri states. “You just enjoy using the app as an entertainment source; it has a community vibe with these really niche memes. That gives you the motivation to get involved.”

“People online gravitate towards people being themselves,” she adds, which tommy reinforces, saying that it’s a principle which extends far beyond social media.

Moving on to discuss the cover of their first record, “They’re just really fun to draw, basically,” piri says of the amphibian obsession that has taken over her aesthetic, stage shows and now artwork. “When we met, I was in a phase of drawing frogs and toads, and we just started calling each other ‘froge’ as a nickname, and that’s still going until this day.”

A crocheted frog hat soon became a staple accessory that defines her signature look. When filming a music video involving the intrinsically linked couple digesting a psychedelic frog (‘on and on’), the chance to continue their vibrant aesthetic proved hard to resist.

It’s these “it just happened” moments that have come to define their music, too, and the whole project was not something that was envisioned as a body of work – hence, the not-quite-debut-album terminology. “It wasn’t ever intended to be an album; we were just making songs,” piri admits. “We did what was best for each song and didn’t think about anything else, like how it would fit into a project.”

“We didn’t approach it with any broad concept; the project just fell into place because we were writing loads of tracks and just desperately wanted to release them,” tommy agrees. “Second time around, we’ll do it in a more cohesive way. We can make it a proper experience rather than just loads of songs put together.”

Never really planned as a body of work, its coming together happened naturally as the couple captured moments throughout their first year of dating. Now, though, their schedules are full to the brim, with a big headline tour around the corner. “You’ve just got to take one thing at a time; thinking about it too much can cause stressful moments,” piri comments, “but at least we’ve always got each other.”

Leaning on each other is the key part of any group, but it’s even more important when you live together, create together and tour together. When tommy’s not taking a break at his parents’ southern farm, he’s getting to know the strengths and weaknesses that the duo can trade off. As he casually phrases it, “you’re the brains, and I’m the vibes.”

piri is less keen to take ownership of their careers but confirms that, “that’s what good teams are all about, having people with different skills that can make up for each other’s weaknesses – and we love what we do together.”

Moving forward, both of the dance obsessives are keen to expand their team with more collaboration. Having written, recorded, produced, mixed, and designed every aspect of their first big statement, they’re ready to open up to the influence of others. Jax Jones and kkbutterfly27xx are two names that have already been feeding this hype machine, but, beyond rising up the charts, there’s one major ambition in mind for 2023.

“Working with Disclosure is a big goal,” piri tells. “They’re aware of us – they put ‘words’ on their record bag playlist, so the seed has already been planted. Oh, and I want Anthony Fantano to review our next album. I have to know what he thinks.”

piri & tommy struggle to stay still and focus on what’s behind them, but when forced to do so, all they see is an ever-growing collection of happy memories. ‘froge.mp3’ is fluid, effortless, in-the-moment, a true realisation of the freedom the pair have experienced to date and serves as a time capsule of a joyous year, perhaps a hint at what might be to come.

“The one track that sticks out for me is ‘sunlight’ because it’s the first song we ever wrote, and it really just came out of nowhere,” tommy reminisces. “The memory of us creating that song is so vivid in my mind.” On this, his counterpart has no qualms: “I got really emotional when the mixtape dropped because the last lyric of that song, the last song on the project, is: ‘let’s start something / all or nothing’. We had no idea at the time what we were even saying with that. It’s mad – we manifested it all.” ■