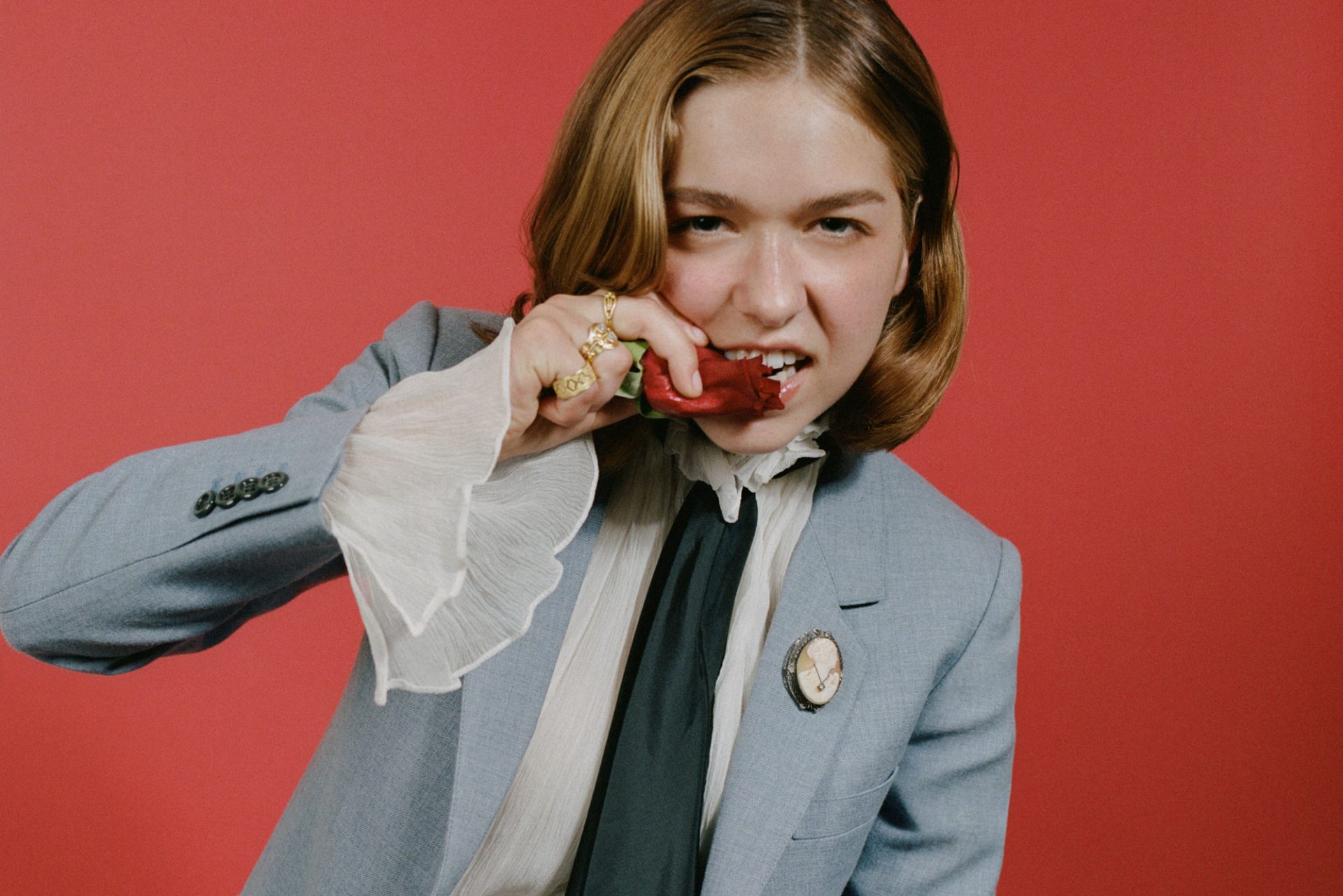 Moving on from the coming-of-age uncertainty of her debut, Snail Mail’s second album establishes her as a force to be reckoned with.

It might be the season of pumpkin spice and grabbing your cosiest jumpers from the depths of your wardrobe, and you might still be mourning festival season, but we’re feeling romantic. Fortunately, you can do without the overpriced chocolates and bouquets of flowers – Snail Mail is back, and the ‘Valentine’ era has well and truly begun.

It’s not your typical lovesick turn of events, though. It’s gutturally angsty and strikingly sure of itself. After releasing her debut album before she even turned eighteen, going off the grid was in order for Lindsey Jordan. Now she’s returned – rejuvenated, refreshed and ready to up the ante. It might present itself in muted pinks and cinematic sounds, but ‘Valentine’ harbours a much darker, more complex core. The coming-of-age arc found across ‘Lush’ has come and gone, and now Lindsey stands steadily in wait.

“I remember everything being overwhelming in a way that it strangely isn’t now,” Lindsey reminisces. “I have a technique and feel a lot more comfortable and a lot less scared, but I’m scared on different terms. The record is really intimate, and the last one was too, but it wasn’t meant to be – it was just like, who cares? Now, I think it’s more intentional, and I think there’s a lot more truth to how scary it is putting something out that’s so close to home, that means more to me now.”

That’s part of the charm when it comes to Snail Mail. Her tracks are a total punch to the gut, and that intensifies to an almost uncomfortable level on ‘Valentine’. Her version of a valentine is effectively slicing each track straight from the heart. “I don’t listen to anybody other than myself when I’m working on music. It takes that much longer for me to make songs where I’m like, yes, I’m crazy about this, this is awesome. People are always saying things in my ears, and I’m just like damn, I don’t care. I just have my own criteria, and it’s so strict, and that goes for the writing process too. I don’t really like to write unless it feels completely necessary and like I’m actually making something that matters to me. That’s cathartic – otherwise, just doing it to do it, I can’t even force myself.”

In chasing the need for that magic, her process becomes incredibly insular. “In a way, I’m lucky. I think my whole team and everyone around me trust me a lot; nobody really bothers me,” Lindsey reflects. “I trust myself, and they trust me, so that helps me. It’s cool to be able to keep the process as natural as possible because that’s hard when other elements start coming in – you know like, people’s opinions, whether they be good or bad. I don’t even like to really see compliments because I don’t want to influence the original magic that was there the first time.”

Every moment of ‘Valentine’ feels completely organic and untouched. The spill of emotion that first occurred when writing the song still flows into the finished tracks; it’s an unstoppable stream. Perhaps her meticulous process is responsible for making that all the more personal. Each track is electrifying in its ability to capture a vivid, specific feeling and effortlessly suspend a moment in time.

“I feel very in touch with that feeling of knowing when things are good and when they’re done. I don’t necessarily think it’s a technique thing – it’s definitely more like everything is a magic thing. Anytime I ever finish a song, I’m always like, ‘oh my god! I really didn’t expect to do that again!’ One of the things I think about all the time and have since I was a child is that songwriting is a well and not a river. Everybody’s always like, no, no, it’s a river, it never dries up, but I have always felt like it dries up. Anytime I make something new, I never feel like I’ve gotten any further in creating a technique. I’m still always like, oh my god, okay, cool. It’s like something comes over me, and I’m just so glad something came over me – I don’t ever expect it to happen again. When doing it ten times, there’s a lot of songs in between that that don’t have the magic to me. They don’t make it onto the record. But whenever it does happen, I’m like, okay, cool, it’s back.”

Every impenetrable rush of guitar or delicately healing vocals found on ‘Valentine’ is laced with that magic. It feels like a window into Lindsey’s world and the startling ups and downs that come as a part of that. It tantalisingly bounds from heavy, high-pressure moments to gentle and tender, but the fervency with which each is delivered is always consistent. These are songs that had to come out. “It’s heavy to imagine playing them live because it was all such a moment. Even though it’s a period of time, every single one was a moment where I was in my room with my journal. I do think it’s like lightning in a bottle, when you’re feeling strong emotions. I don’t know how long I’m going to feel like that for. I’m so lucky to be overly sensitive, because I’m a songwriter. If I’m feeling something strongly, I’m like – write something. That time period was an emotional one, a lot of that was written during the pandemic, and a lot was going on.”

That shimmering, epiphany-like manifestation of the tracks on ‘Valentine’ is palpable. ‘Light Blue’ is a devastating example: as Lindsey’s voice sounds increasingly choked up against peaceful finger-picking, there’s an urgent resolution to the track. They seem to exist with all the immediacy they were first developed with, and it’s even more crippling because of it.

“It was an insanely transformative time for me – I feel like I started it as not a child, but almost emotionally a child,” Lindsey remarks on the past year and a half. “I was on tour for like my entire young adulthood so far until the pandemic pretty much, and then a lot of that time period, up until now, it’s been about like learning to be a normal adult. A lot of that stuff doesn’t really come naturally. I have my days pretty planned out for me on tour, and a tour manager telling me what to do – a time when I’m at soundtrack, a time for dinner, a time for this. I have skills that don’t really matter in the real world, and then being in the real world was hard. It was really hard. I was like damn, I am so behind a lot of people in my life – I don’t have a lot of these emotional skills, so it was growing pains on growing pains.”

It’s a transition that is difficult for most people – adding the stress of a pandemic to that move from adolescence to adulthood makes it all the more disorienting. But when your life before was constantly on the move, the adjustment to that newfound stillness is all the more jarring. For Lindsey, however, there’s more comfort to be found in that quotidian, everyday life that she has had the freedom to sink into over the last couple of years. “I spend a lot of time being a normal person – that’s like my bread and butter of being alive. I’ve got my private life private now. I don’t even have Instagram; someone else does that. It’s been increasingly important for me to keep my stuff to me, and then I can give away a lot in the songs, and really give my arm and leg. Then at the same time, nobody knows what the fuck I’m up to – that’s cool, I love that! I’m a routine bitch, there’s a lot of stuff I have to do, and I spend a lot of time making sure I do those things; I play my Xbox a lot, I read a lot by myself, I see my friends a lot. Most of my friends are not entertainers, and it’s cool to keep my shit separate. It’s really important to me.”

It’s interesting that to stay away from social media is to become somewhat enigmatic these days – undoubtedly, it is symptomatic of a year spent endlessly scrolling through Tiktok and deep-diving on Instagram. It works in Lindsey’s favour, though, and maybe it’s something we should be following suit with. “Having attention on [social media], a lot of it made me feel a little weird. I was feeling it on the outside when I was with my friends and stuff; I feel like I was just getting a little external validation,” Lindsey admits. “It’s given me such a different perspective, just paying a lot more attention. It’s just like a behaviour switch. I notice a lot more things, I feel a lot more present. I think ultimately it helps me with my work a lot.”

It manifests in intricate detail and a refreshing clarity. ‘Ben Franklin’ is arguably Lindsey’s most haunting, sultry track yet, but it’s incredibly grounded. The similarly poppy ‘Madonna’ shares that self-awareness, too. It’s as though the peace and normality she has found in her day-to-day life have allowed to look at things through a completely different lens. It allows Lindsey to reach her sharpest point, lyrically. At times, like on ‘c.et.al’, her mocking smile is almost audible. She never shies away from being completely scathing, and a lot of the magic she yearns to find in each track is rooted in the composure and assurance it takes to look at things so clearly.

“All of it is for me. I just want to express myself,” Lindsey exhales. “There was an expression of angst [on ‘Lush’] that felt natural and real but having the platform plus the angst is weird. I’m more in touch with my songwriter feelings and feel less free than I did on ‘Lush’ in a way. I didn’t think that would be that successful. I really didn’t know, so it was low stakes.” On ‘Valentine’, the stakes might be higher, but she leans into that. It’s an opportunity to be bolder, more ambitious, more admonishing. Nothing is off-limits on ‘Valentine’, but Lindsey shines when she wears her heart on her sleeve.

Looking back, ‘Lush’ was hazy, and misted over. It was the rose-tinted glasses of infatuation, when a crush is a crush in every sense of the word. ‘Valentine’ is something else entirely. It’s the quiet confidence of a long-term, steady love. Maybe it’s not the romance the album title suggests, but the love comes in the form of growth and commitment to yourself. It’s a new age of Snail Mail. Gone are the shrouds of cloud and blurred edges – the rose-tinted glasses are gone, and Lindsey Jordan is completely in focus.

Taken from the November 2021 edition of Dork, out now. Snail Mail’s album ‘Valentine’ is out 5th November.