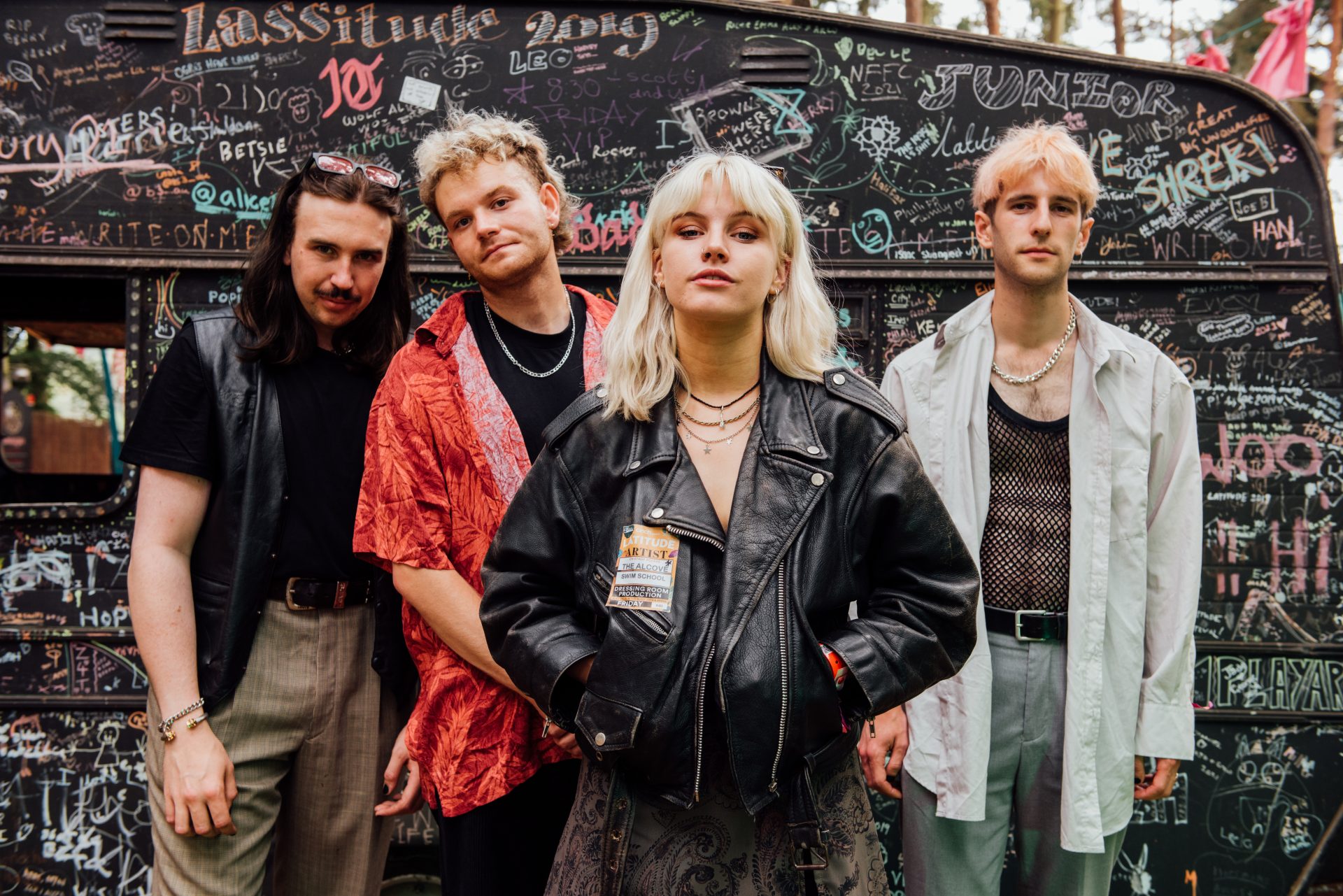 Swim School are breaking out of Edinburgh with their debut EP.

New kids on the block Swim School bring together an anthemic indie grounding and an atmospheric dream-pop glaze that makes their newest offering, the ‘Making Sense Of It All’ EP, an emotionally charged masterclass of new-rock dominance.

Working out of Edinburgh, each of the four members offers their own dish of finely cultivated experience – including new drummer Billy McMahon, who was recently pinched from another act to bring over not only his skills but a unique perspective. Watching your future bandmates from the barrier must be a strange memory to reminisce on?

“I’m the only one in the band who’s seen Swim School from the fan’s perspective. They’ll never see themselves from the barrier,” he chuckles. “Their first gig was supporting my last band, and I’ve seen them buzzing around the Scottish music scene… they were a band that just strolled on and were unbelievable live.”

Guitarist Lewis Bunting also appreciates the sense of ambition from within Swim School, as the sheer scope of their sound stands tall. On what sets them apart, he opens by jesting that, “one big difference is that people actually like Swim School, which is a great place to start.”

The third member of our Zoom call, frontwoman and singer Alice Johnson, is still discovering her own abilities as part of her first-ever band. “I wasn’t even a singer before this,” she reveals. “I used to go to all these gigs and see soundchecks and just soak it all up. I thought it was so cool and knew I’d love to be part of this scene.”

With punchy vocals that permeate through gorgeously reverb-soaked landscapes on recent singles like ‘Outside’ and ‘Anyway’, showings of immense prowess brush aside a low gig count. “If you listen to our last song before the new chapter of Swim School, the vocal change on the newer stuff is massive,” she adds, and it is clear that the last 18 months have had a big impact here. “It pushes your confidence if each time you write a song, you’re questioning: can I pull this off?”

Even with experience, it can be difficult to discover a collective identity with internal and external events persistently reshuffling the cards to play with, and pushing boundaries has led to a transmutation of the Swim School singularity. “It was always an indie-pop band,” Billy notes, “but we knew the next chapter was going to be naturally quite dark. We released ‘Let Me Inside Your Head’ at midnight and woke up categorised as a rock or grunge band.”

“We’re a completely different band to what we were when we first went into lockdown,” Alice chimes in. “The way we sound, the way we look, even our line-up; it’s all paid off. It feels like Swim School’s just started. Are we a rock band now?” she laughs.

As with any group starting out, a lot of the same comparisons – or ‘for fans of’ suggestions – are likely to crop up; here, Foals and Wolf Alice seem a good place to start as any. “Basically, we’re Tesco Value Wolf Alice,” Alice snickers. “Ellie [Rowsell] is the reason I’m even in a band; I owe everything to her.”

The ‘Making Sense Of It All’ EP explores the rollercoaster journey of mental health through specific events of the last year, with responses to significant moments constructing a time capsule for this second chapter in the quartet’s career to date. “We went through lots of ups and downs as a band,” they collectively disclose. “That’s just life in general, isn’t it? Nothing goes according to plan, but that journey is what helps you develop.”

Employing the chaos of life as fuel for the fire of progress is just one example of the dedication committed by all four musicians in Swim School, and they’ve worked tirelessly alongside exhausting jobs in various public-facing roles to pay the bills (how relatable, huh?). With the foursome destined for imminent glory, this effort seems worthwhile.

“As people, we are hard workers and are driven by the fact that this is what we want to do with the rest of our lives – we put every single ounce of energy we possess into this band, and it pays off,” Alice enthuses. “If you’re working on something and you don’t think it’s the best you’ve done, or you’re not even particularly keen on it, what’s the point?”

Maintaining this mindset sounds tiring, but she says that, “for every song I question how we’re going to top it, but I’ve always been proud of the result. In all honesty, we never know what we’re going to write. Whenever we go into a room, we come out with the complete outside of what we expect. We have no idea what songs going to come next, and that’s probably the most exciting part of being in this band.”

Taken from the September 2021 edition of Dork, out now. Swim School’s ‘Making Sense Of It All’ EP is out 20th August.