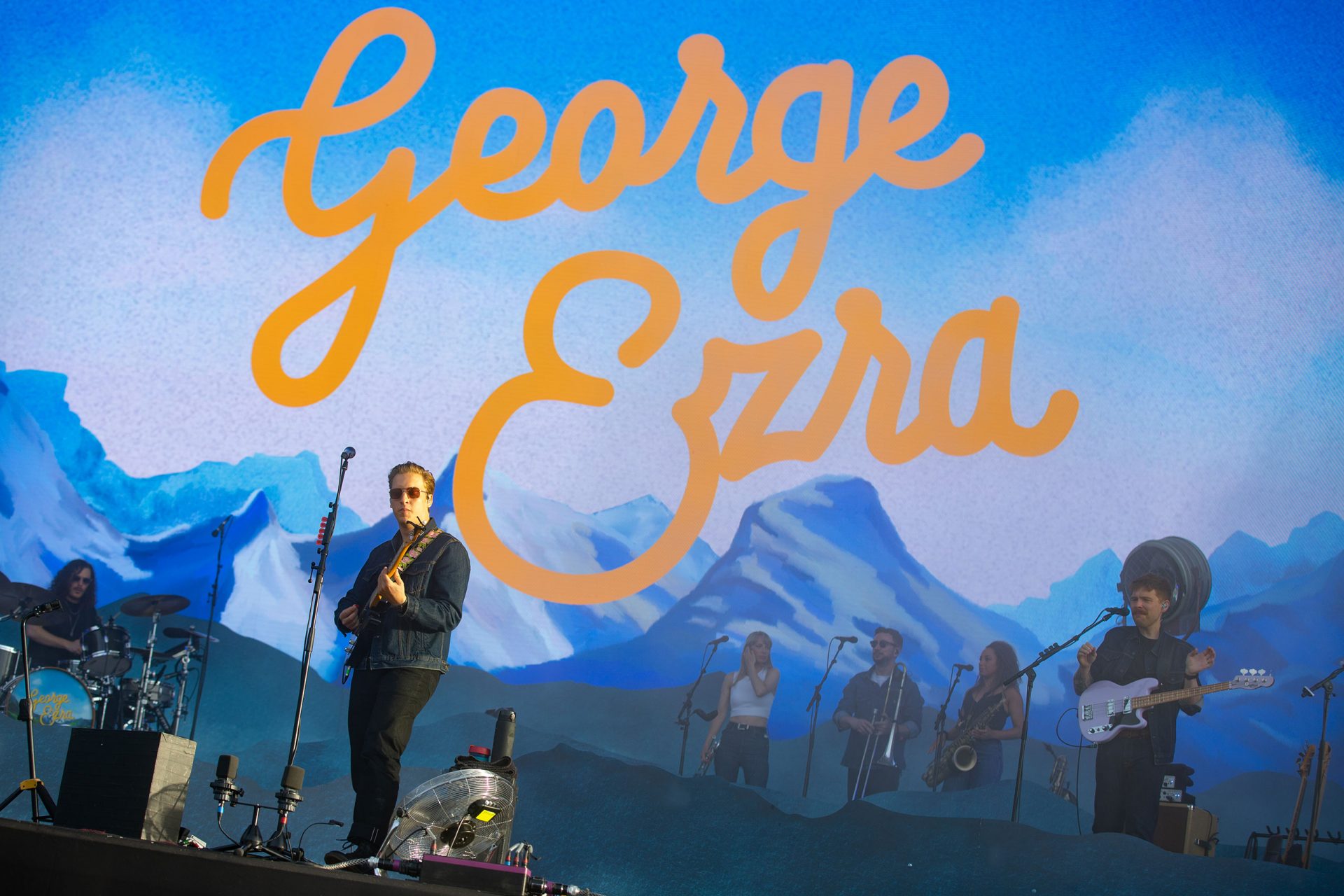 The idea of escaping can take many forms, but that idea of a release and comfort away from the world is something we can all connect with. It’s at the core of everything George Ezra does. Whether it’s reflecting on heartbreak, embracing the good times or taking us to pastures new, it’s also what has made him a beloved national treasure. As he headlines Finsbury Park, tonight is confirmation of all that and more – of an artist on the top tier doing it all in a way that makes him feel like the friend next door. The difference here, though, is laid out by the man himself: “I write about escaping, but I don’t want to do that anymore. I want to be right here.”

Up to much on your birthday? For Jules from The Big Moon, there’s the small matter of playing Finsbury Park before Mr Ezra comes later. In what feels like the start of a brand new era, days after the release of their new single ‘Wide Eyes’, their set feels like a wake-up call. Feeling effortlessly natural on a festival Main Stage, they bounce off one another between a cover of ‘Praise You’, ‘Your Light’, and more – it’s bloody wonderful to have The Big Moon back.

From the first note, Holly Humberstone has Finsbury Park in the palm of her hand. Captivating from start to finish, her level of honesty and rawness is compelling. ‘Falling Asleep At The Wheel’ and ‘London Is Lonely’ has the park hushed in appreciation as she showcases the world she’s creating. Boosted on-stage with drummer Loda, Holly is becoming the sort-of artist that unveils another layer with every new release. ‘Scarlett’, ‘Overkill’ and ‘Sleep Tight’ fizz with big time energy, and by the time her set is through, another wave of fans are along for the ride.

Mimi Webb is a surefire crowd pleaser on a day like today. Ranging between anthems that’ll fill radio playlists all day, every day, and raw, epic ballads, her rise to the top isn’t up for debate. A cover of The Kid Laroi and Justin Bieber’s ‘Stay’, a triumphant ‘House On Fire’ and breakout ‘Good Without’ are welcomed with open arms – as Mimi Webb shows her star credentials.

With undeniable confidence from Tom Ogden leading the charge, Blossoms‘ set is a display of how to be a band in 2022 while still doing things in your own distinctive way. With dazzling new album’ Ribbon Around The Bomb’ to hand, Stockport’s finest sons flex their muscles with a festival tour-de-force. There’s everything from electric party starters like ‘I Can’t Stand It’, ‘Your Girlfriend’ and ‘There’s A Reason Why (I Never Returned Your Calls)’ to gorgeous 70s grooves with ‘The Sulking Poet’, ‘The Keeper’, ‘Care For’ and ‘Getaway’. Throw in a dash of ABBA with ‘Oh No (I Think I’m In Love)’, plus the super-sized closer ‘Charlemagne’, and you have a band thriving with creativity. There’s nobody quite like them.

By the time George Ezra takes the stage, Finsbury Park is more than ready. “We’ve been looking forward to this day for so long,” he notes early on, and it’s clear what this show means to him. What follows is the ultimate summer headline performance from the last true bop-and-roller. ‘Anyone For You (Tiger Lily)’, ‘Cassy O”, and latest album title track ‘Gold Rush Kid’ are soaring rock-pop starters to a night that feels more like a night-in with George Ezra as he pours tales and tunes on a crowd eating up every moment. That earnest sense of knowing George is something that connects at the click of a finger – a wordsmith for a modern time that crosses generations with ease.

It’s all about joy and celebration from start to finish. The sun-kissed ‘Pretty Shining People’, ‘Don’t Matter Now’ and ‘Listen To The Man’ are met with mass singalongs and beaming smiles. George Ezra connects with his fans in a way few others can. It’s a life-affirming release led by a songwriter whose dreams have captured the hearts of millions. When he switches things up to the heartstring-pulling ‘Hold My Girl’, ‘Barcelona’ and the practically deafening ‘Budapest’, it’s jaw-dropping. For an hour and a half, nothing else matters. Any thoughts of trouble are wiped away.

But tonight is a party, first and foremost. As he rips through ‘Green Green Grass’, ‘Paradise’ and ‘Blame It On Me’ before rounding out the evening by sending confetti and fireworks into the sky with ‘Shotgun’ – George Ezra cements his spot as a summer superstar. The world still may need that sense of escapism, but tonight is a call to arms for celebrating the here and now.