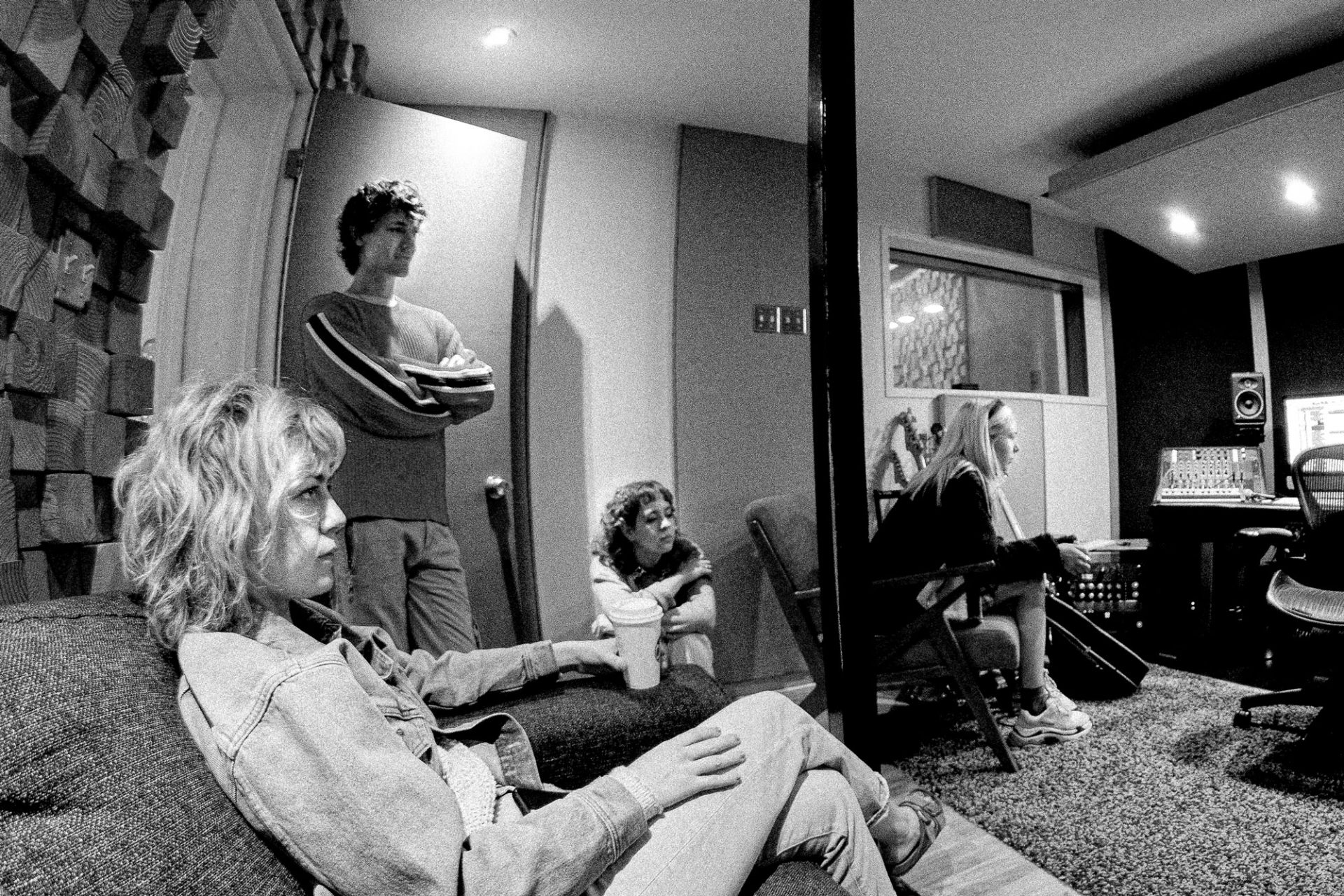 The Regrettes: “This feels like the most powerful album we’ve made”

With fresh single ‘Monday’ teasing The Regrettes’ first full-length release since 2019’s ‘How Do You Love?’, Lydia Night shares the joys and challenges of shaking things up – ‘exciting’ seems to be the key word.

It’s been a fairly quiet couple of years for LA-based punk-rock quartet The Regrettes, with just a few single releases offered since their conceptually dramatised second record dropped. With the glaring sheen of some galvanising new tracks now breaching our horizons, the group are ready to jump back into action. “It’s a really good feeling, and I’m excited about everything going on,” primary songwriter and vocalist Lydia Night beams from her Californian home.

Having used some much-appreciated downtime to run a food Instagram account and test her flexibility with yoga, it is the practice of journalling that has most helped focus Lydia’s energy on gaining confidence in a bold new direction. “The album that we’ve created is a big leap forward in a way that is completely exciting for me, but it takes a lot of gassing yourself up to feel confident enough with making that kind of change,” she shares.

Much of this new material has been birthed from a new kind of writing session involving less sitting in studios and more gesturing through a screen. “For the first two months of quarantine, I was like, ‘fuck all of you, no way am I trying that’. I completely fell in love with the process, though,” Lydia recalls. “A lot of the time, it’s healthy to separate work from home life, but with songwriting, it’s a really special blend when [co-writers] are coming into my world and all the problems that exist around me in my life.”

Bringing others into her world has become even more important on album three, as the group move from exploring a world of love to navigating a complicated internal environment. Lydia says: “It’s special to me that ‘Monday’ is the first song we’re coming back with – it’s a really dark song! It’s a fun, dance-your-pain-away vibe, but it’s about me experiencing a lot of anxiety and depression and dealing with a lot of mental health issues that I hadn’t really understood in the past, so I couldn’t write about them before.” Confronted with a whole lot of herself, this period has allowed the young talent to finally reflect. “It starts off being therapeutic for me, and then it hopefully becomes therapeutic for other people too.”

Having bounced between tour cycles since the age of 12, Lydia is not used to sitting still for too long and so compulsory idleness caused quite the mental stir. “It was just a massive smack in the face in terms of ego and where my personal value and self-love was placed,” she divulges. “It was important for me because it’s a scary thing to rely on that. It’s been a really intense but incredible experience to learn about the other things I bring to the table as a human being that aren’t performing.”

With a constantly expanding limelight honing in on their every move, it would be easy for the four-piece to freak out at the documentation of their evolution. Fortunately, the opposite is actually true. “Tying into the existential crisis theme, life can feel like it’s going by so fast,” she comments. “It’s a comforting reminder that we’re always going to be constantly growing, and it’s okay to be proud of where you’re at now right now and for that to be enough.”

The music video for ‘Monday’ plays on this idea, based on conversations that started in Joshua Tree National Park during a ten-day Regrettes expedition for the members to look for creative ways to complement the new tunes. “We were in Joshua Tree, dancing around our living room to early 2000s music that we used to listen to at school dances,” Lydia looks back. “We were crying at the idea of our middle school selves knowing each other and what that would have been like, how awkward we all were. We thought it’d be incredible to meet those people in a music video.”

The realisation of these ideas proved overwhelming as collaboration though Zoom writing sessions transformed into a set full of friendly faces; fellow creatives gave the social excitement usually felt in front of those live crowds. Speaking of audiences, The Regrettes are adamant to only create music that they would be listening to themselves from now on.

“It feels more in tune than ever with what I’m listening to and what I’m a fan of, which is all you can really do,” the frontwoman explains. “How can you not be confident in something if it’s what you would want to listen to? It’s truly the first time it’s felt like that. In the past, I really wanted to prove myself and the band as being cool enough to fit into these circles in LA. It’s the stupidest shit ever. There’s no point wasting time by doing anything other than what you want to do, making what you want to listen to.”

To create music she could fully enjoy, Lydia turned to her own influences and debated how she could transition to these very different sounds: “I’m inspired by The 1975, Charli XCX, Gwen Stefani, all this shit… I don’t want to wait forever to get there, so how do we blend these genres and make this big soup of what we all love?” With their punk and rock roots, this basically meant throwing the band into a whole new world of sounds. “You cannot dip your toes in something,” Lydia dictates. “If you’re going in the water, you have to jump in the water. So we jumped in, and I think we did it!”

Clearly motivated by a sense of forward momentum, the lyrical content also takes a big step forward and dives into some vital themes not yet pursued on the last two records. Lydia explains that, “it was like pulling the string on a sweater until the whole thing has started unravelling; it was really incredible to experience.” So what whole do these two intrinsic musical elements form together then? “It’s more vulnerable and darker than ever while also sonically embracing what we’ve been scared to for so long. Taking these risks feels powerful; this feels like the most powerful album we’ve made.”

With an extended break from shows and the first gigs back now fast approaching, the prospect of returning to the stage once again is… Exciting? Terrifying? “All of the above,” she agrees. “When so much of my self-confidence came from this performer, the scariest thought in the world is: what if I can’t get her back? What if I’m not her anymore? It’s terrifying, but I’m excited to feel that again.”

Lydia wraps up with one last message about what fans should expect in the near future: “It feels like us finding ourselves and becoming adults in a lot of ways. It’s a lot of focusing inward and growing up, a lot of self-realisation. I know that I love it; I think it’s the best thing we’ve ever put out. Hopefully, other people will relate to it, given the fucked up climate we live in.”

Taken from the November 2021 edition of Dork, out now.