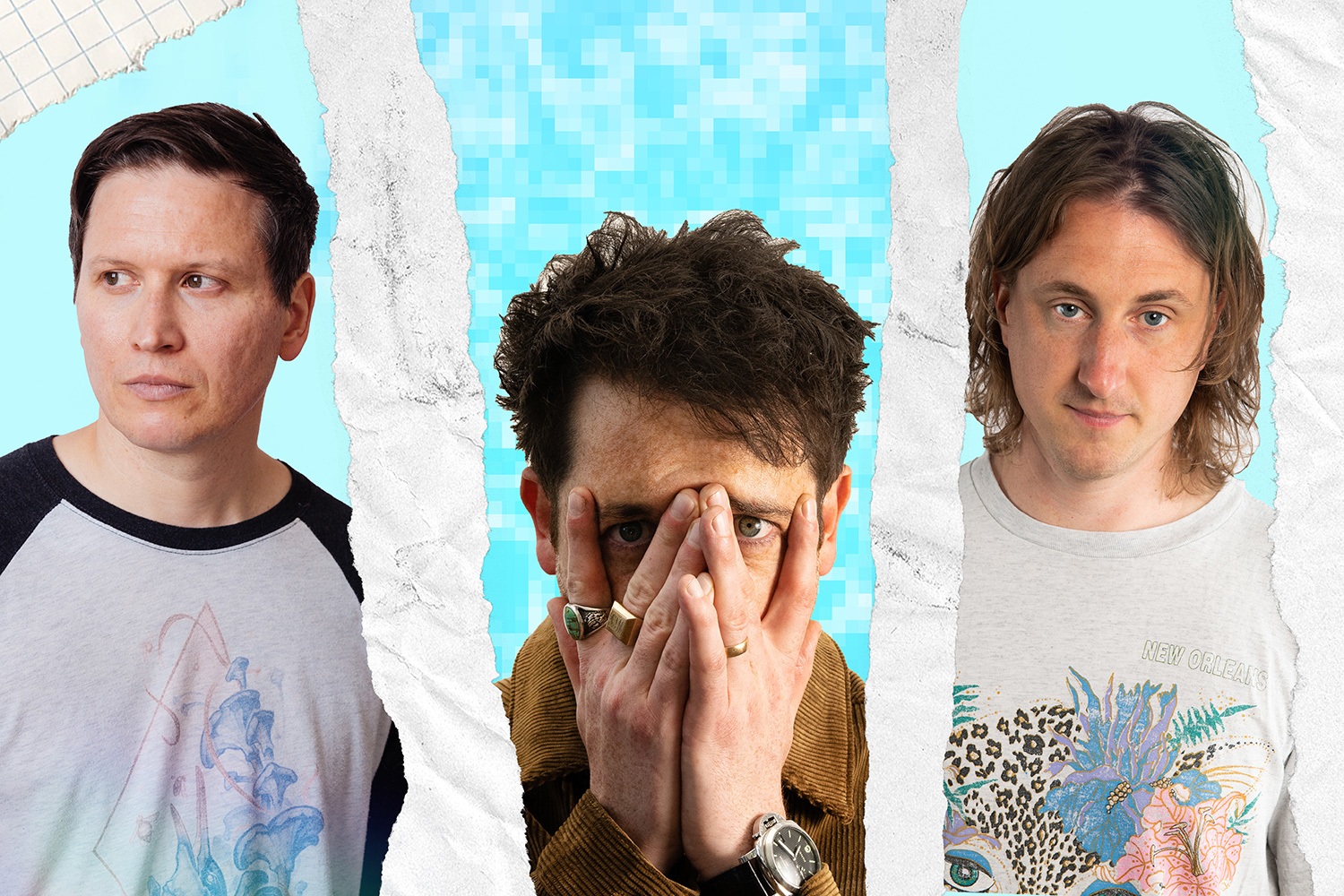 Not ones to let a pesky global pandemic get in their way, The Wombats are back with a new single titled ‘Method to the Madness’ and news of an enormous London show slated for next year. We gave Murph a buzz to get all the details.

The Wombats never seem to stop, do they? Even while stuck at home in LA, Matthew ‘Murph’ Murphy has been all-go over the pandemic, cracking on with what will be the band’s fifth studio album, with Dan Haggis (drums) and Tord Øverland Knudsen (bass/keys) just as busy this side of the pond. The first taste of new music is ‘Method to the Madness’, a slow builder that finds Murph moseying ‘round the streets of Barcelona’s gothic quarter. From a chilled, almost metronomic start, the track builds to a whopping climax with some of that non-stop energy these guys do so well. Murph gives Dork the low-down on making an album over Zoom, going viral on TikTok, and stage-diving into German fans’ faces.

What’s it been like living in LA through the past year and a half?

Just crazy. I’m vaccinated, so I technically don’t have to wear a mask outside, but it’s always round my neck. I’ve got two kids, and it’s very unusual for me to be at home for a year and a half. It’s been great to get into some Dad/family time.

Let’s talk about ‘Method to the Madness’. Was it recorded since Covid?

Yes, we did the whole album over Zoom. It was ridiculous. For those recordings, I was in a studio in LA while Dan and Tord were in London with Mark Crew, who’s the main producer. We’d check in each morning to figure out what the goal was for the day, but after a few weeks, they really started dwindling, so sometimes I’d be recording vocals for one song, and they’d be like five steps behind me, or five steps ahead, and Mark had to take everything and shove it all together afterwards. When we worked with [producer] Jacknife Lee, I was in LA with him, Tord was in Oslo, and Dan was in London with Mark. It was really odd.

When was the last time you were all in a room together? It must be difficult summoning the energy to create upbeat music when you’re so disconnected from one another.

Reading Festival 2019 was the last time I saw Tord. So next time I see him, it’ll be two years! On our first album, there were only three or four songs where we recorded together as a band. In that respect, we don’t all need to be in the same room to get that energy, somehow. We wrote ‘Method…’ in early 2019, and we had a good demo of it, and Dan could just track the drums to that demo. So long as we’re not doing any tempo changes, he can just be playing along. That was one of the easier parts, really.

The lyrics and artwork reference Barcelona, which you’ve described as influencing songs in the past, like ‘Pink Lemonade’. Do you find European cities especially inspiring?

Cities, in general, have some kind of energy or dream-like quality to them, which I’m always running towards in songs. My wife and I had this great wedding in Spain. When we went on our honeymoon, we didn’t really plan it; we just got last minute flights and used the HotelTonight app to bounce around Spain and Italy. I think ‘Method…’ is generally about our honeymoon and this feeling that everything could change, but actually, nothing could change whatsoever. Sometimes I need to know where a song is taking place. I have to put it somewhere in my head, and that comes out in the lyrics. It turns out ‘Method…’ was Barcelona.

There’s a lyric in there about “no more subscribing and no reviews”. Not sure we’d agree with you on that one.

Ha! It’s not an attack on the music press. It’s a bit of an attack on the pitfalls of social media, and there’s a fair few that go on like this through the album. Generally, it’s very positive and keeps us all connected, but it gets a bit messy at times. For me, “no more subscribing and reviews” is about relinquishing judgement, in a way.

My relationship with social media has changed a lot over the last 16 months. Life is too nuanced to fit inside 280 Twitter characters or whatever it is on Instagram. A lot of those nuances are really important, and they just get cast aside for the main narrative that someone’s trying to push. It started getting me down, so I don’t use it anymore.

A remix by Oliver Nelson of your track ‘Greek Tragedy’ blew up on TikTok recently. Metrics look great on paper – it’s used in 600,000+ videos, some with over 100 million views – but how was that experience, especially as someone trying to ween themself off the socials?

I could show you pages of emails from our management trying to get the band on TikTok, and we’re just not responding. I’m sure it’s fun, and I know it’s a good way to promote but, fuck me, there’s already enough of this shit! I can’t get sucked into another thing. I prefer watching films to series now because I’m bored of cliffhangers sucking me in, and before I know it, I’ve lost a week of my life.

It’s just ridiculous, really. I don’t understand it. I know some influencer posted a clip of herself singing it, and then everyone was doing it… That remix was never officially released; it was on some Hedkandi compilation. I guess if you stick around long enough, bizarre things like this are gonna happen.

On the topic of sticking around, it’s amazing to see how far you guys have come compared to a lot of the acts you were bunched with when you first started out. What do you attribute The Wombats’ longevity to?

I haven’t got a good answer for this. We just work really fucking hard, I guess. There have been some moments of adversity in our career, and we’ve battled through. Head down, get on with it.

Could you give an example?

After our third album, we played Ally Pally. It sold out, it was such a great show, and then we got dropped by Warner the next day. I took that really hard, but our fourth album [2018’s ‘Beautiful People Will Ruin Your Life’] came out of that turmoil, and now we seem to be stronger and healthier than ever. I think we’re the first band to get dropped by a major record label and then get bigger. It’s not something that happens very often!

I just think as a band, we all share a common interest in what gets us going. I guess I have certain melodies that are a bit unusual and certainly with the lyrical content; if a song’s not a little bit weird, I’m kind of bored. When I’ve worked with other artists, I’ve tried to dumb down the lyrics to make it more commercial or whatever. For The Wombats, it has to be weird otherwise I don’t get off on it. It’s one of few instances where you can pigeonhole yourself, and it’s a positive thing. There’s something about that which has stood us apart from, you know, The Pigeon Detectives, stuff like that. Those bands who were probably bigger than us when we started but have died away. There’s something about the weirdness that we carry with us that people gravitate towards.

You’re playing the O2 Arena next year, so you must be doing something right! How does it feel knowing that show is happening?

Well, right now, I need some more signs that life is coming back [but] it feels like such a huge milestone and a real, big sense of achievement to have even booked it, to be honest. I know so many bands who have played massive arenas and then, on their next tour, played tiny clubs. Just because you do it once doesn’t mean you can do it again! I don’t take it for granted.

Taken from the July 2021 edition of Dork, out now.  The Wombats’ single ‘Method to the Madness’ is out now.