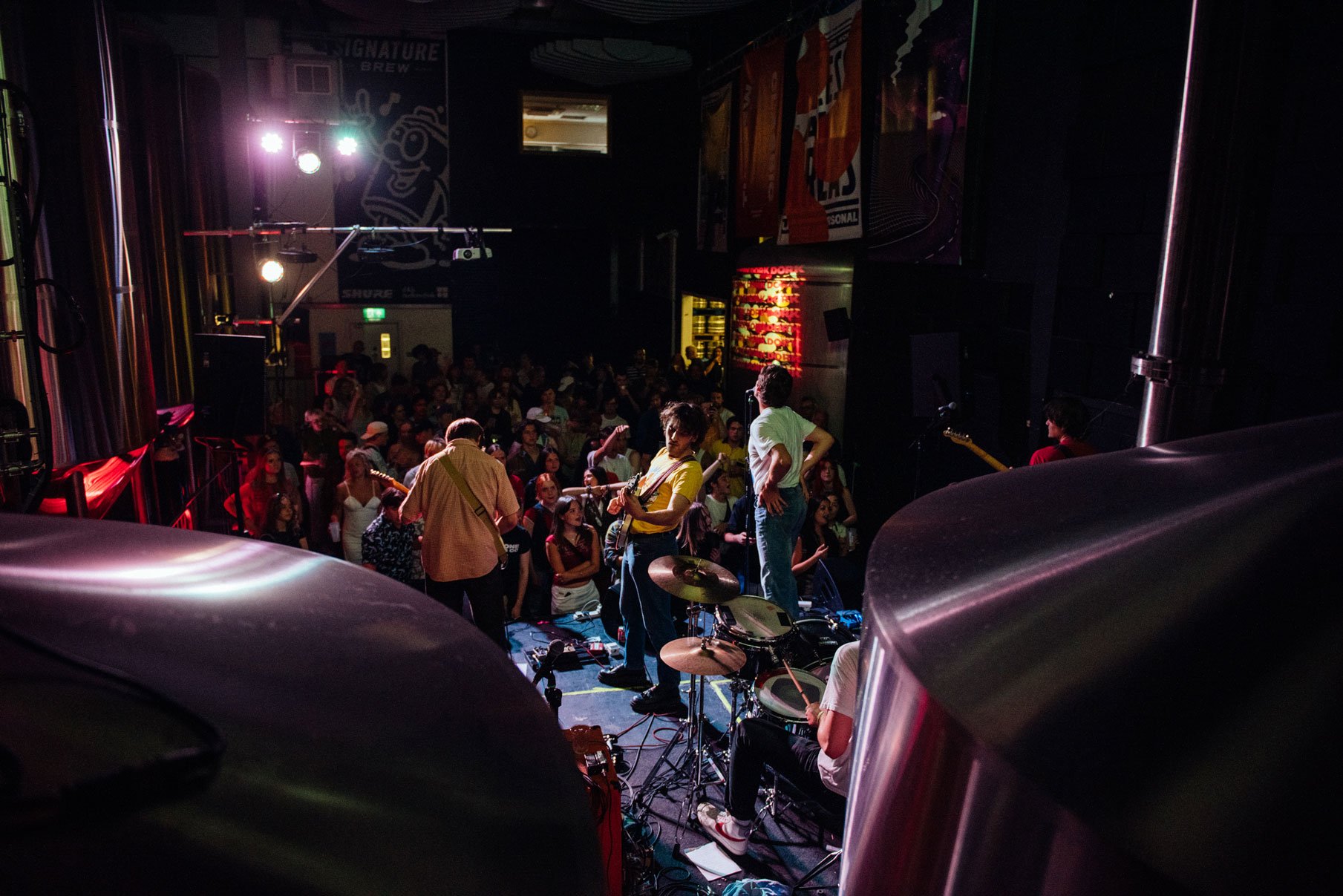 The first-ever Dork’s Day Out is nestled nicely in the Signature Brew Blackhorse Road brewery, which means we are quite literally throwing a piss-up in a brewery. We good? Got that joke out of the system? Sweet – because for our inaugural all-dayer, some of our favourite artists mark their territory with a jukebox of unmissable bangers.

As the sun beams down on Signature Brew, Mollie Coddled kicks off proceedings with a shimmering blend of dream-pop and indie-dreaming focused on sweeping everyone gathered off their feet. With a touch of new music dropped into the set, cuts like ‘Guilt Trip’ and ‘Lonely Bitch’ are a proven marker in the ground that Mollie is a very special future pop star indeed. You heard it here first.

For Chilli Jesson, there’s a refreshed sense of purpose and drive to everything he does on the Signature Brew stage – latest EP ‘St Vitamin’ providing the sort of heart-on-your-sleeve anthems that he’s fully embraced for his emphatic new direction. A commanding presence, it’s the sound of a true indie great showcasing a new side – with a rapturously received version of Palma Violets’ ‘Best Of Friends’ thrown in for good measure. A crowdpleaser from start to finish, it feels like Chilli Jesson is making the music he was born for – and the results are showstopping.

With Jessica Winter’s DJ set dropping a buffet of the biggest pop bangers, Pip Blom follow with an all-encompassing party atmosphere that comes with playing two shows on the same day (you’re welcome, Wilderness). Dialled up to 11, it’s a fire trip across their two studio albums. A band full of vigour and energy, they leave the stage with a crowd eager for more, and if their set today is anything to go by, they’ll be filling far bigger stages than this in the years to come.

Following such a show would be tricky, but L’Objectif’s set today already feels leaps from their already stellar turn at our Dork’s Night Out x The Great Escape warm-up show. Brimming with indie credentials, the Leeds favourites jump between crunching riffs and punchy pop licks in a manner that leaves no doubt to all bearing witness: they’re one of the most exciting new bands going.

Looking for another nod at ‘best live bands going’? STONE have been carving the sort of name for themselves over the past few months that gets you excited about their every move. Their performance is nothing short of a revolution, distilled into 30 minutes of visceral punk energy. Led by frontman Fin Power, the likes of ‘Leave It Out’ and ‘Waste’ are incendiary, mixed with powerful messages of love and understanding even in the darkest of times. Leaving the stage in a ring of feedback, STONE aren’t here to mess about.

As Austin from Swim Deep drops a wild mix of hits outside on the patio – particular highlights being the Swim Deep songs and ‘Streets Of Philadelphia’, we reckon – there’s a party-spinning mood that carries through. Coach Party’s year can only be described as game-changing, from headline tours and standout festival sets to the small matter of playing the Stade De France, there’s a feeling in the air that Dork’s Day Out is getting a real treat witnessing them tear up the Signature Brew stage on their way to superstardom. With raw and vital indie-rock flooding through every note, it’s clear just how unstoppable they’ve become – ‘Everybody Hates Me’ and ‘FLAG (Feel Like A Girl)’ are just two highlights from a set that confirms why their star continues to soar.

After a stacked day, it’s no small task to close out proceedings, but FEET have a winking charm and knack for providing the most fun of times. It’s a celebratory vibe that refuses to let up from the very beginning. Opener ‘Petty Thieving’ sets out their stall, and the party erupts with every note from there. ‘Busy Waiting’, ‘Ad Blue’, a perfectly apt ‘English Weather’ (minus the umbrella), and ‘Chalet 47’ are nothing but essential – and prove just what sets them apart from the rest. FEET are not only packing the bangers but the personality to back it up.

As bands convene, requests are made to the late-night DJs, and more orders are swiftly made at the bar – Dork’s Day Out proves itself to be the perfect summer day out for those looking for a new music fix with a dash of pop nonsense. Come on now, did you expect anything else?