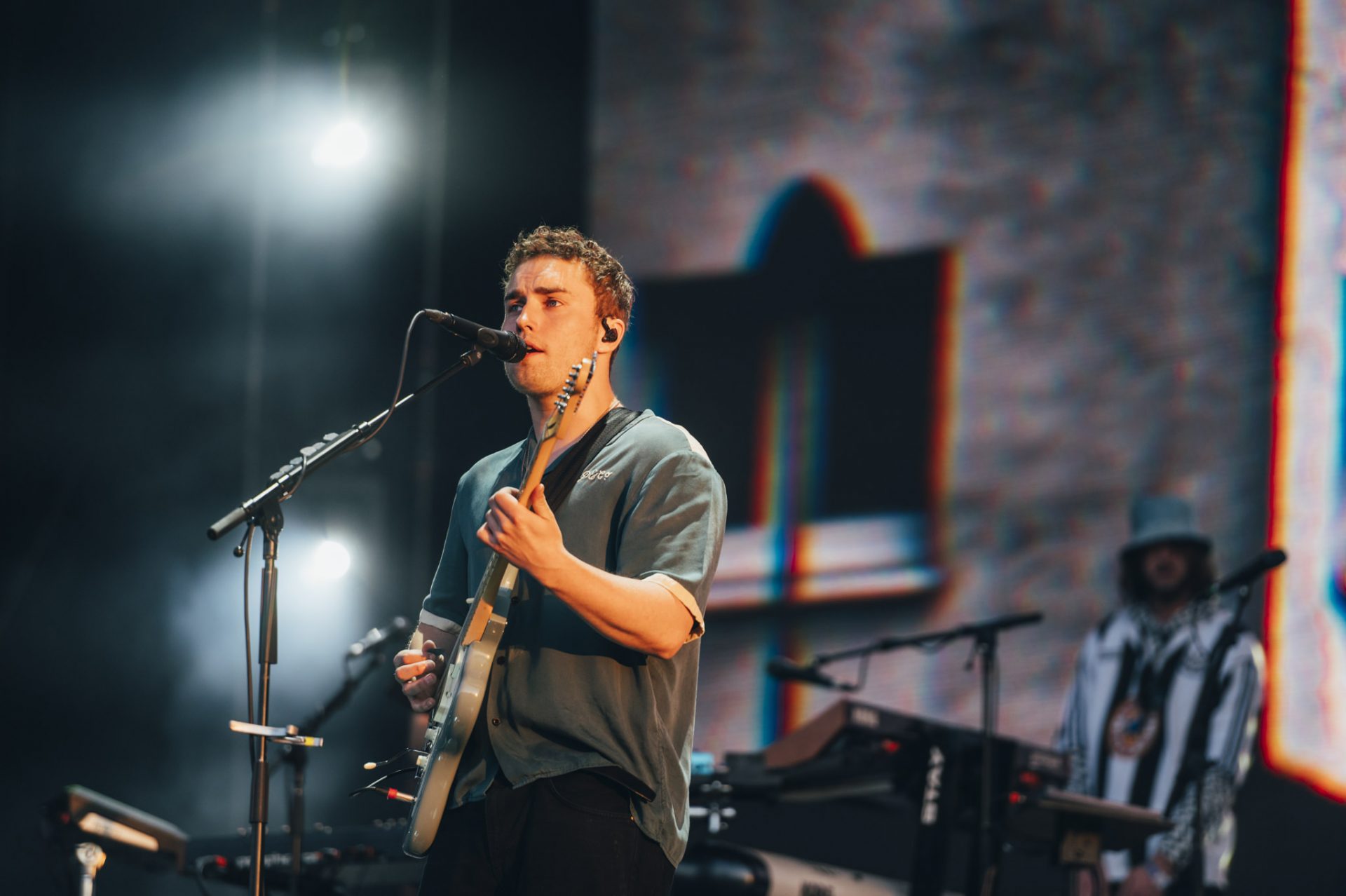 There’s a sea of black and white flags, an even bigger ocean of Newcastle football shirts, and that sense of palpable anticipation in the air that comes with a big summer headline show. It could only be Sam Fender at Finsbury Park.

Since the very beginning, it’s seemed these sorts of nights were already scribbled in Sam’s diary. Fender’s songs soar, but never lose touch with the realities of life, its struggles and what it means to be alive in modern Britain. Filled with emotion and that awareness of the people and the streets that first made him, he has that sense of connection that most superstar acts couldn’t touch – and it’s seen across Finsbury Park for a day very few will forget.

More than that, it feels like a celebration of other voices telling tales of modern life in their own distinctive manner. Today, Finsbury Park is a coming-together of artists who know their power, changing the game for a new generation. Not just in music – but far beyond, too.

Take opener Rachel Chinouriri. Emerging with her own stunning indie bops, it’s a perfect way to start a sun-soaked day. The likes of ‘All I Ever Wanted’ and ‘Happy Ending’ encourage singalongs and a new slew of fans desperate to hear more from an artist fully coming into her own. Meanwhile, Nilufer Yanya‘s set leaves everything on stage (including part of her tooth). It’s a spellbinding set from an artist who knows how to create a vibe. Tracks from her two albums, ‘Miss Universe’ and ‘Painless’, showcase how special her future is.

STONE, over on the John O’Keefe Low Lights stage, serve up the sort of sizzling indie-punk that threatens to tear down the very structure they play on. It’s full throttle and immediate but undeniably powerful – from a band that must be seen live to be truly believed. Expect venues around the country to be shaking in anticipation.

There may not be a better combination than a clear blue sky and Declan McKenna. Taking to the stage halfway through the day, it’s a technicolour celebration from start to finish. The likes of ‘Daniel, You’re Still A Child’, ‘Isombard’, ‘The Key To Life On Earth’, ‘Be An Astronaut’ and ‘Brazil’ are euphoric – with a presence on stage that most would only dream of. Embracing every moment, it’s no hyperbole to say it’s easy to see him headlining these sorts of stages very soon indeed.

The words of Fontaines D.C. could fill a novel multiple times over, but stepping out onto the Finsbury Park stage tonight – it’s their aura that catches the attention. Three albums in and starting to feel like a very big deal indeed, there’s a sense that they’ve firmly nailed exactly what they want to do on their terms. Exuding an ‘I want to be up there doing that’ type of cool, they’re compelling and intoxicating in equal measure. Leaps and bounds from the live show of just a few years ago, their menu of ‘Hurricane Laughter’, ‘Too Real’, ‘I Don’t Belong’, ‘A Hero’s Death’ and a breakneck ‘Boys In The Better Land’ are more than enough to devour over and over. Cuts from latest album ‘Skinny Fia’ like ‘Jackie Down The Line’ and erupting set closer ‘I Love You’ show where they stand right now, though. Blossoming with each step, Fontaines are a perfect tonic.

On the same day as ‘Beatopia’ drops, beabadoobee turns Finsbury Park into her own playground. It’s no wonder – when recent singles ‘Talk’ and ‘See You Soon’ hit, they turn the park into a shimmering world, with Bea standing front and centre, a superstar creating everything around her. Having fun at every step – whether it’s jumping between a drowned-out singalong of ‘Coffee’, a wide-eyed party that comes with ‘She Plays Bass’, or the punchy vastness of ‘Back To Front’ or ‘Last Day On Earth’ – the result is the same: a bigtime celebration as a new era kicks off in style. One ticket to Beatopia, please? Return journey? Naah, we’re staying, thanks.

Certain artists’ music makes more sense the bigger they get. Sam Fender is a prime example of that. His anthems may have knocked the doors off clubs, theatres – hell – even the grand stages of the biggest venues this country has to offer, but they have never felt more at home than they do in the massive fields and parks of the summer. It’s why Finsbury Park not only feels like a genuine moment as Sam takes the stage tonight, but also where he belonged all along. One look at last month’s Glastonbury set says it all – these songs were made for the biggest of crowds to sing their hearts out to. Tonight, we’re precisely where Sam Fender was born to be – and boy is that clear by the time fireworks rain down at the end.

The opening trio of hits that welcome the evening perfectly capture what’s taken Sam to the very top. ‘Will We Talk?’, a thriving indie stormer, ‘Getting Started’, a swirling classic songwriter tale dialled up to 10, and ‘Dead Boys’, a brutally-to-the-bone story that taps into the common consciousness. It’s a combination that signifies just why he’s become a very big deal indeed – someone who puts into words what so many can’t.

He can jump between the soothing tones of ‘Mantra’ before letting rip with the one-two of ‘Spice’ and ‘Aldi Howdon Death Queue’. What holds it all together is the undeniable hold that Sam Fender has on a crowd. Drifting between a catalogue that already feels like a greatest hits collection, the likes of ‘Spit Of You’, ‘The Borders’ and ‘Play God’ all perfectly rub against each other, feeling like songs we’ve known our whole life. Dropping new track ‘Alright’ and beloved fan rarity ‘Angel In Lothian’ is all part of the Sam Fender experience. At no point does this feel too big. If anything, it’s natural. By the time ‘Get You Down’ roars into view, there are fans crying, smiling, cheering and signing in equal measure. It’s almost indescribable.

Taking a moment to acknowledge what this all means, the finale hits even harder. ‘The Dying Light’ – dedicated to “the ones who didn’t make it through the night” – leads into a firework-filled finale. ‘Saturday’, a near riotous version of ‘Seventeen Going Under’ sung from the top of everyone’s lungs, and ‘Hypersonic Missiles’ puts a bow on an evening that, in Sam Fender’s world at least, feels like a genuine moment.