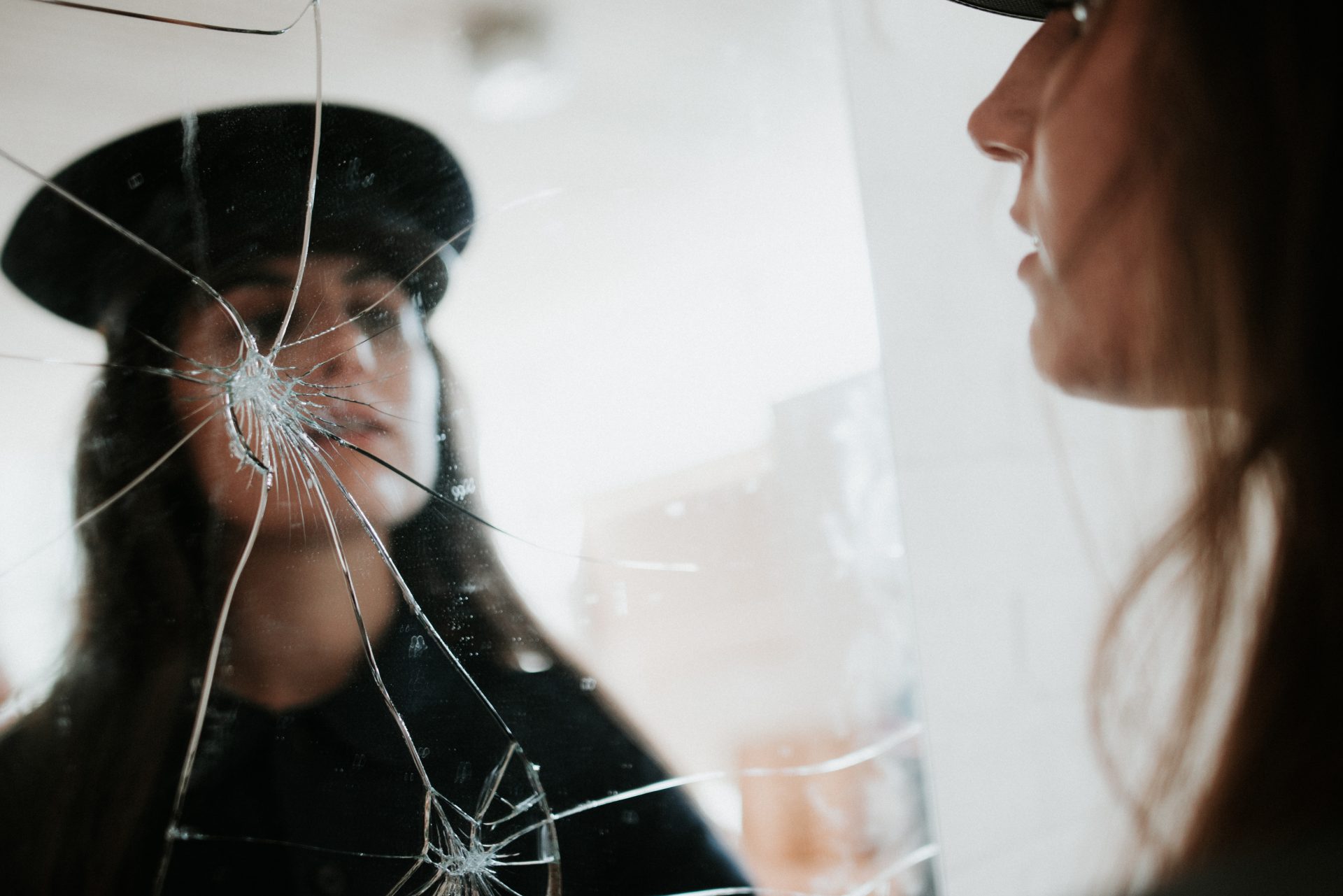 dodie: “What does it really mean to be human?”

In this darkest of timelines, dodie is back to remind us it’s okay to be grey.

Despite all the delicate and ethereal moments on her debut album, dodie wants you to know she is no angel. On ‘Build A Problem’, she unpacks every aspect of her life, pulling back the curtain to reveal the darker parts of her that’d previously been polished and sanitised before airing them online.

“I’m looking forward to releasing this and hopefully bringing a little more grey into everyone’s vision of me,” says dodie, “because I am a human being, I’ve said it so many times. My last record was called ‘Human’. But what does it really mean to be human?”

She’s chatting to us from her studio flat in London, a place she hasn’t actually been all year because she’s been combatting her loneliness by living with a friend down the road. “I actually still am lonely though just because the pandemic creates a lot of loneliness,” she adds. “I feel like the world all moves as one in terms of moods.”

It’s a particularly gloomy day on both ends of the call – snowing on our side and raining on hers – and coming towards the end of a very long week, where the whole UK went back into lockdown, so what better time to talk about a pretty melancholy record, ay?

We’re joking of course, dodie’s been primed and ready to get this record out for a long time. Usually used to the instant gratification of being able to craft a song and put it straight out into the world via YouTube, ‘Build A Problem’ has been ready to go since autumn last year, and she’s very ready to get it out there.

“It’s not too new now, but it still is like, almost an uncomfortable feeling to make something and be like, right, I guess I’ll hold on to this for a while. It’s tough to know when to stop adding and changing, like, I think this is it, I think I love it? I’ve not listened back to mixes like a year later and been like oh no!”

It might come as a surprise to those who’ve come to know dodie primarily as a ukulele wielding teenager that some of the tracks on ‘Build A Problem’ are these huge orchestral landscapes. She’s dipped her toe into the cinematic style of her debut in previous releases, most prominently on 2019’s ‘Human’ EP, but also on 2016’s live version of ‘When’ that appeared as a bonus track on otherwise pretty peppy debut EP ‘Intertwined’, and now fits perfectly on her debut album five years later. Funnily enough, it’s a track about longing and time passing you by, “I knew it was gonna be relevant, like, the literal lyric is ‘it’ll be over, and I’ll still be asking when’ like, I’ll be at the very end, and this will still relate to me. And I’m like, yep, six years later, it still does.”

‘Build A Problem’ salts the same wounds that Taylor Swift’s ‘folklore’ and Phoebe Bridgers’ ‘Punisher’ did last year. Confessional and introspective with the occasional quip for a touch of irony. It’s stripped back and rarely percussive, her vocals are feather-light and ASMR-esque most of the time, occasionally cracking into something grittier. dodie really feels everything she’s singing, and it’s wonderfully translated.

“I battled with what kind of an artist I was”

It took her a long time to warm to the sound she’s curated today. Initially scared off by the idea of drowning her small voice in huge pop production and coming out of sessions hating what she’s made because producers have done exactly that. It wasn’t until she met producer Joe Rubel (known for working with Tom Grennan and Maisie Peters, plus this little unknown indie artist called Ed Sheeran) and started using a video editing software to splice together clips of her singing and playing different instruments that she got used to writing less acoustic tracks.

“It has been interesting to hold on to it for so long because I’ve moved on from who I was when I wrote it, as you do you. You grow. It’s strange to still be talking about these topics and feelings even though they’re always going to be relevant to me because I wrote them and as with any lesson, you take them with you.

“For a while, I battled with what kind of an artist I was. Am I sort of an indie singer-songwriter bedroom artist who writes very small acoustic songs, or am I like this pop queen who’s trying to get on the radio, and I couldn’t pick and, and then suddenly I had the realisation I can do both. I think this album is such a great combination of that.”

She’s still very fond of the ukulele though. It appears on most tracks on ‘Build A Problem’, and she’s incredibly proud of her roots with the instrument. In her room, she’s sitting in front of a wall of ukes, we ask her to pick her favourite one, and she struggles, but plumps for a suave black model that’s a replica of the first one she ever had, which got smashed on tour. The deluxe version of the album honours her past by including several demo tracks she’d written in lockdown.

As a person who’s put a lot of her life online, only in recent years dialling it back and shielding herself by channelling her experiences into the music instead, the album release is a huge relief, if a slightly nervous one. She mentions that all her music takes artistic licence so of course parts are exaggerated and others too vague and poetic to let listeners too far in, but it’s still very intimate. She’d also dropped her surname when she started releasing music properly, going mononymously as dodie, which sort of feels like another layer of protection.

“I haven’t shared in so long. I haven’t shared music in so long, I haven’t shared in videos for so long. And I’ve been so scared of the internet. I feel like people build up an image of me, like a perception of me that I am not. The amount of times that people have called me an angel and I’ve just thrown my phone away because I’m like, no! It makes you feel so guilty, like, so disgusting, like a liar,” her face scrunches up and she squirms, clearly bothered by this.

But are the dodie that appeared in vlogs for years and dodie the artist two different people? Are they both different from dodie in real life?

“I think I was always being myself. But when it’s edited and put out there, and people apply a certain… they bring their own stuff to you. It’s also easy to see that 1% of my life that I’ve shared as 100%; it’s just the nature of the internet, but it gets twisted into a different vision. See, I can try to be as myself as I can, but obviously, you have to protect yourself. It’s just a really weird dynamic, and such a weird thing to navigate and I think it’s why I’ve like strayed away for a while. The older I get, the more difficult it gets as well.”

She’s shared so much of her life, deeply personal parts of it at that, with virtual strangers since 2011, sometimes getting too real and often speaking candidly about her battle with her mental health, particularly her depersonalisation disorder that’s proven hard to manage and treat, along with discussions about her bisexuality after coming out in 2017, and familial and relationship issues.

Of course, lots of that plays out on ‘Build A Problem’ – the clue is in the title, taken from a track titled ‘Hate Myself’ – as she processes years’ worth of experiences. ‘Rainbow’ is an uplifting dedication to her bi-ness, while ‘Special Girl’ dissects her difficult approach to relationships. Then there’s the middle track ‘Four Tequilas Down’, a story of an illicit affair sandwiched between two instrumentals.

“I remember, I wrote it, and my friend Sammy was like, ‘You really want to put this out? Like, are you sure?’ And I’m like, I think so? I think it’s probably the right thing to do,” she says of the track. “It’s tough, and a lot of people are like, why are you romanticising this thing? And I’m like, not romanticising it, I’m processing it! I’m putting it on display. If other media can explore like feelings that are problematic, then surely music can as well, surely I can? Just because I’m a fucking seemingly sweet angel girl doesn’t mean that I can’t write about this stuff. I’m not an angel. It feels like I almost want to like go against that. Maybe that’s why I did it. So I could like push that boundary.”

Although she wants to challenge other peoples’ perceptions of her, it does seem like sometimes it gets a bit too uncomfortable for dodie too.

“It does get tricky when you cross topics that you’re still going through, like you’re still processing like you’re not really sure how you feel about it. There’s a song on there that called ‘Guiltless’, and it’s about a relationship I had with someone I don’t talk to anymore now. I was in a soundcheck, and I was feeling really sad about it, like triggered by something, and I went to have a big cry. And then I heard somebody just whistling it down the corridor, and I was like, that is so fucked up. Like, I can’t believe you were just whistling this that I wrote about this deep, deep trauma that I have.”

It’s different when it comes to fans telling her how these songs have changed their life, or helped them out of a tough situation. dodie says she knows what that’s like and sometimes it’s hard to truly express her gratitude. “It is no small thing when someone says, I relate to this song, I relate to this feeling of something that I’m going through in my life and like, their situation is probably incredibly complex and like, so different to mine in so many ways, but it doesn’t matter. It feels good to know that we all connected.”

She signs off our chat with the best descriptor for ‘Build A Problem’ and in a way that’s pretty damn humorous considering the record’s subject matters. We ask who the album would be dedicated to, and she says “Oh my god. For anyone who feels like their life’s a hot mess. Not because it will help. It won’t.”

Yeah, it might not help, but we all need a good cry sometimes, and on this album, dodie can definitely give you that.

Taken from the March 2021 edition of Dork, out now. dodie’s album ‘Build A Problem’ is out now.