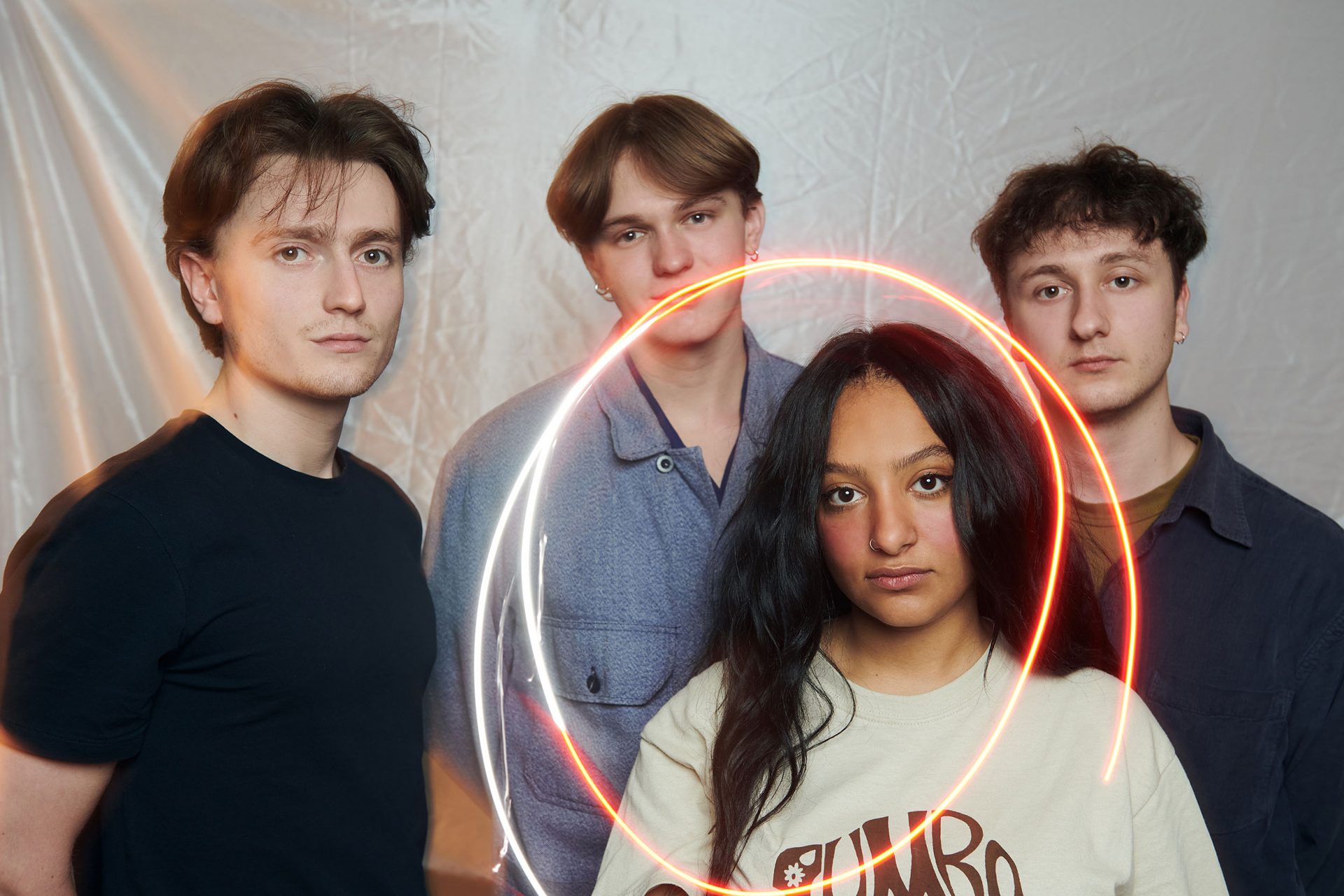 Hype List 2022: English Teacher: “The message of the music is 100% the most important thing”

Leeds indie newcomers English Teacher may only be just getting started, but they’re already starting to pick up attention in all the right places.

“The EP feels a lot more cohesive, it sounds a lot more like us, but there’s a huge scope for what we could do that’s so exciting,” notes English Teacher guitarist Lewis Whiting. Right at the starting line of where their powers could take them, the band’s razor-sharp edge of stinging experimental alt-rock and post-punk has already made them a must-see name at inner-city new music showcases over the past few months. It’s enough to ensure that they must be bursting with confidence as 2022 approaches, right? “I mean, it’ll be exciting to try out some shit,” continues Lewis. “It might be terrible, though.”

“It probably will be terrible,” cracks vocalist Lily Fontaine, “but it will be ours!” The laughs ring out between the pair. “Please keep that in; I love that.”

It’s not the sort of thing you’d expect one of the most exciting new bands going into the new year to say, but English Teacher are the candid shot of realism needed right now. A swirling mix of different influences, tastes and visions, their 2021 has been punctuated by the sort of moments and releases that stop you in your tracks. It must come from asking a pretty important question of themselves. “Is this terrible? It’s always a big question! We’ve done this with a few different tunes, one that’s on the EP, actually! I think it was Lewis or Nick [Eden, bass] who were like, is this good? And we were like – NO! And now it’s great!”

“Not really selling ourselves, are we?” beams Lily.

Whether it’s supporting the likes of Sports Team, TV Priest and FEET or adding a refreshing new look to the world, English Teacher are the shimmering new band on the block who’ll be dropping jaws in no time. Like they’re already doing, after all.

Completed by drummer Douglas Frost, their innate and unravelling power feels like a trademark on every release. Their latest number, ‘Good Grief’ (taken from that as-yet-untitled upcoming EP), is a sub-three-minute ripper, jolting between off-kilter guitar lines and raw overflowing energy that erupts into a ferocious release. Yet, at their core comes something altogether more important, for in Lily’s lyrics comes a vital message on the state of modern Britain – both personal and universal at the same time.

‘Good Grief’ finds Lily directly capturing the shocking levels of suffering caused by those in charge during the pandemic, while their previous number ‘Wallace’ helped paint a picture of rising right-wing sentiments through the prism of Wallace Hartley – the famed band leader of the Titanic whose name now adorns the local Wetherspoons in Lily’s hometown. Ironic at times but hungry to capture these emotions and moments, it makes English Teacher a must.

“It’s the main reason why I do this,” explains Lily. “The music is a way of me getting the writing that I love doing out there. I like talking about things that are either important to me or have affected me, or I think other people would find interesting. The message of the music is 100% the most important thing for me. It’s why I’m really particular over things like the imagery we use; for me, it all has to feed into the same thing.”

While the early steps of English Teacher landed back in 2020, it’s only been with the addition of guitarist Lewis that the band have found their true sound and purpose. “These songs that we’ve released since you joined Lewis have just like, been way more our sound and taken us to a completely different place,” notes Lily.

Before the release of ‘R&B’ at the start of 2021, “I was pretty much managing the band and everything going on,” explains Lily. “We had amazing support and mentors before who were amazing, but this year we’ve had more of these mentors come to help us, which is lovely. It’s allowed us to develop sonically without having to constantly worry about all the other things that come with being in a band.”

“This has been one of the best years of my life”

With more time to focus on the music itself since signing to famed indie label Nice Swan, English Teacher’s sound has become something altogether more formidable.

“When we started playing together, we didn’t have this clear direction of exactly what we wanted to sound or be like,” picks up Lewis. “It still feels like we’re trying to figure that out, but that’s exciting. We sound a lot more cohesive, but we’re still just trying to work it all out. We’ve got such a wide range of influences, and it’s not something we massively talk about, but they all play a part.”

The blueprint of English Teacher, though, was something that clicked instantly when all four were in the same room. “It’s when we wrote ‘R&B’,” pinpoints Lily. “It was the first time that we all wrote together with Lewis in the band, and we wrote it in just one day and in our front room which we used to rehearse in. It was done in a couple of hours, and we looked at each other and went – ahhh, okay. This is cool. Something’s going on here! Whenever we get that feeling now when we’re finishing new songs, we know that we’ve hit something that we want to put out there.”

Lately, English Teacher have become the band every other band have recommended for fans to check out. Being able to play with such a broad array of acts, often in far-flung venues, and plug into the different sounds emanating from every corner of the new music world, have only added to the mix that English Teacher continue to concoct. Basically, if you think what you’ve heard so far is great, then wait till you hear what comes next.

“We’ve been so lucky to play with so many bands that we like,” reflects Lewis. “I feel like most of the songs we wrote on the EP have kinda come from when we’ve been out and about, writing them while touring and shows. I think it’s absorbed some of that sound into what we’re doing.”

“Though we like all sorts of different music,” picks up Lily. “We’ll go from playing with or listening to someone like Opus Kink, who sound completely different to Sports Team, for example. Maybe we do pick up all these different influences from different people – even if we didn’t, everyone is just so supportive and having that behind us as well as been amazing.”

For English Teacher, 2021 has been, as Lily describes it, “one of the best years of my life. So much has changed, so it’s been stressful, but it’s been amazing.”

Now attention turns to the future, and everything built so far stacking even higher. More music, more gigs, touring around the world and seeing fans react in places they never thought possible is one side. For Lily, the ability to talk more about those experiences, both personal and shared, remains right at the front of everything they do. In all aspects, right now feels like the calm before the storm as English Teacher become a lot of people’s new favourite band.
One thing their next move won’t be, though? Terrible.