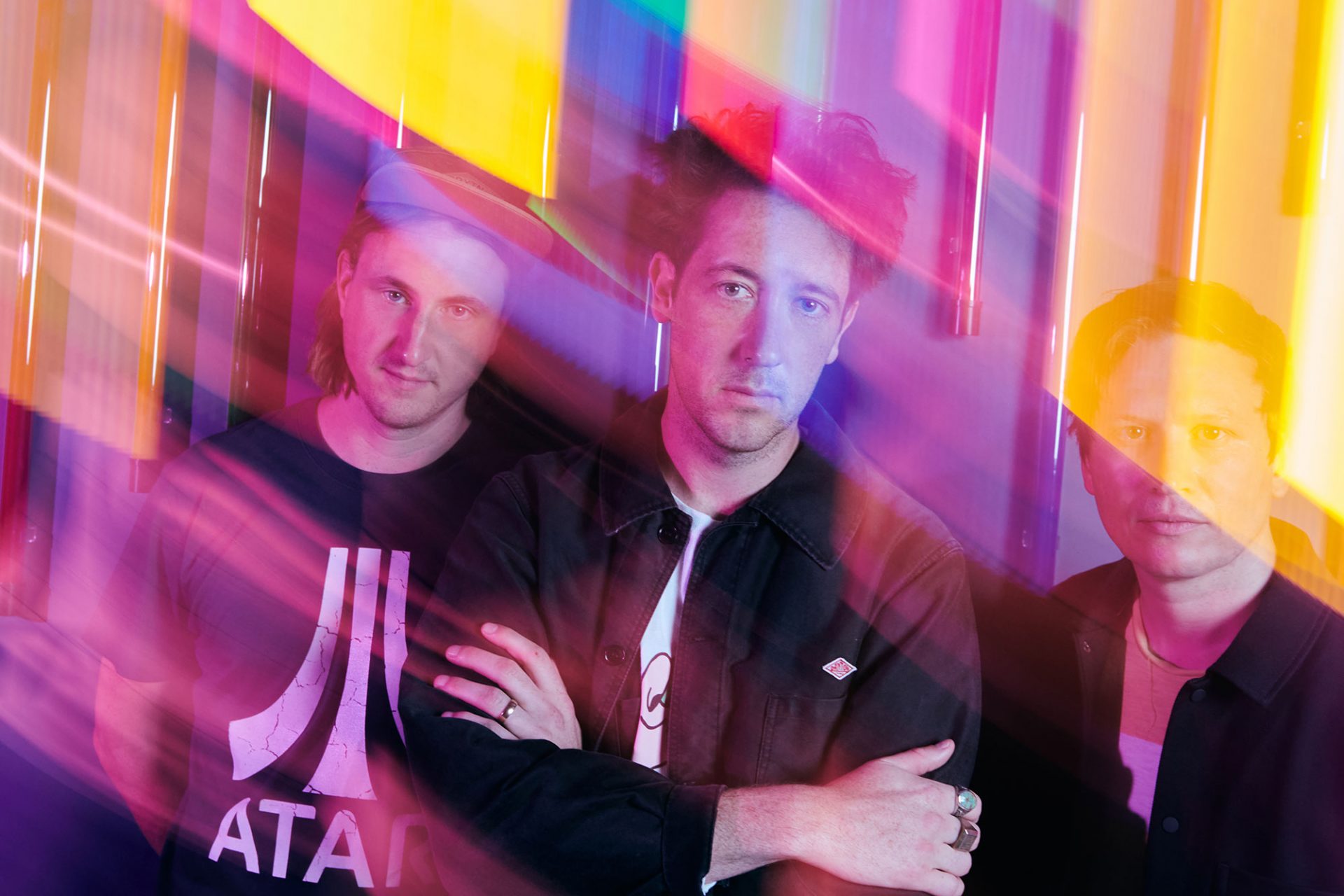 The Wombats: Fix Up

When we think of indie-pop powerhouses The Wombats – back with brand new album ‘Fix Yourself, Not The World’ – we think of, well, mini-golf. Why? They’re both tee-rific. (Sorry – Ed.)

“When we started The Wombats, we had a couple of summers where we played a lot of golf.”

Perched on a sofa in their record label’s London office, The Wombats’ lead Matthew ‘Murph’ Murphy and drummer Dan Haggis have the sort of rapport you’d expect from bandmates of almost 20 years. That is, as we brush over this interview’s adjoining photo shoot, the ability to pick up where each other leaves off, with a dryness that often segues into deadpan.

“Even the best golfers on a mini-golf course could get beaten by a ten-year-old. It’s a bit of a laugh,” notes Dan, fully straight-faced.

Completed by Tord Øverland Knudsen (today absent), the Liverpool-formed trio’s fifth album ‘Fix Yourself, Not the World’ isn’t all fun and games. It finds the band in the throes of pandemic-induced anxiety, examining and re-examining their lives and relationships, unearthing more questions than answers. However, in true Wombats fashion, they lean into their collective angst, uncorking a bottle of technicolour pop-rock that provides at least a momentary escape from Covid blandness.

The record predates the pandemic, but not by long, Murph explains, with around half of the songs written “pre any of this crap” in Los Angeles, 2019. When lockdown struck, and with the album yet to be recorded, current events began to seep in, marinading already anxious tracks in fresh paranoia.

“It doesn’t matter what instrument you grab. Just shove it in your face and blow”

“It did play a big role, in certain songs more than others. ‘Work Is Easy, Life Is Hard’ and ‘Everything I Love Is Going to Die’, I’d say. I’ve never thought of it as a paranoid record, but obviously, I was stuck in my studio kind of freaking out for many, many weeks during the pandemic, so it has gotten in there somehow.”

From the sinuous single ‘Everything I Love…’, one lyric sticks out as a particular sign of the times: “What a crazy pranged out year / And we spent most of it kissing teeth locked in a quarantine”.

“I don’t know where that line came in,” he ponders. “It was something I would always talk about with my wife – I was like, are people gonna be writing pandemic songs now? What are we gonna do? I was trying to keep all that stuff very far away, but it kind of did it itself.” The album had to be assembled remotely, with Murph in LA sending recordings back and forth to Dan and Tord in London, and producer Mark Crew helping piece the puzzle together. “He nearly had a breakdown by the end of it!” Dan laughs.

Being thousands of miles apart detracted from the fun of recording, but in ways, their new method of working benefitted the album’s punchy sound.

“Getting to play in a room together, there is no feeling quite like it, and as a musician, that is obviously what you really love doing. But saying that, we very rarely record all three of us at the same time. It actually worked well sonically that Murph was in a different room, to have those different guitar sounds and vocals than he would have had otherwise. I think it made the album richer. And day-to-day, it was really nice waking up and getting a load of stuff sent over and being like, ‘fuck, this is cool’. Hearing it all come together… there were lots of great moments in the studio where we were absolutely buzzing.”

An anxious jitter has always run through Wombats tunes, like in their now-ubiquitous festival bop ‘Let’s Dance to Joy Division’, which revels in wide-eyed confusion about girls, boys, and all the rest. Although the Wombats who made ‘Fix Yourself…’ are far more worldly than their teenage selves, a similar uncertainty sits in the bones of its songs and even the title.

“Weirdly enough, art imitating life and vice versa,” Dan starts, “when people have mentioned the title [they’ve asked] whether it was influenced by the pandemic. Last year we had less exterior stimulus going on with life in general so, doing lots of reading and thinking and therapy launched a lot of questions in my own mind. It was definitely a couple of bumpy months for me, trying to figure out who the fuck I was!” he laughs. “It’s a weird one.”

A quote from the album’s press release describes ‘Fix Yourself…’ as a ‘self-help guide for the domesticated malcontent’. “We were definitely not a part of that, by the way. Although it is a good line,” Murph chips in, though the statement rings true: the album’s tracklist reads like chapter titles from a motivational book. ‘People Don’t Change People, Time Does’, ‘Work Is Hard, Life Is Easy’, the rather self-explanatory ‘Worry’. Less driven by literature clichés, Dan points instead to a shared interest in psychology as inspo for their navel-gazing.

“We’re both inquisitive people in terms of how the human psyche works. Learning about why we act certain ways, why we do certain things and trying to figure out the essence of who you are and why you do things… I think we’re both very interested in that.”

As for practising self-help, they both mention Wim Hof as an influence. Who, sorry?

“He’s a legend,” grins Dan, visibly enthused. “He’s this mad Dutch guy. He’s called the Iceman; he holds all the world records for going underwater the longest in freezing conditions, and he’s done a marathon in his boxers and no shoes in the Arctic.” Murph chuckles loudly. “He is living proof of the power the mind can have over the body. You do these breathing things, freezing cold showers… Waking up our animal brain, almost. Because we all get docile. We like to wrap up warm in the cold or have air conditioning on [when it’s hot], so we’re sheltered from the elements and therefore missing a key component of being human. Shocking your system into life also helps regulate your brain and all the chemicals getting lobbed around.”

“It’s amazing,” Murph agrees. “If I do this eleven-minute thing on YouTube once a day, that whole week I’m so much better regulated, I’m calmer, I think better. It’s kind of crazy.”

“Exactly!” Dan smiles. “Then you’re off to the races.”

“It was definitely a couple of bumpy months for me, trying to figure out who the fuck I was”

In support of ‘Fix Yourself…’ the band have a huge tour slated for this year, including a date at London’s O2 Arena with Sports Team and The Night Café in tow. It’s an impressive feat for the trio, who not that long ago often found themselves lumped in with the so-called ‘landfill indie’ rock scene of the late noughties. When Dork last caught up with Murph, he credited the band’s endurance on their unusual lyrics and melodies: “It has to be weird otherwise I don’t get off on it.” On this album, they push their already eclectic sound – a far cry from the meat and potatoes garage rock of their early work – even deeper down sonic avenues.

As well as shimmery electronica and Madchester psych that drift over ‘Wildfire’ and ‘This Car Drives All by Itself’, regal brass sections bubble up in places too, the result of in-studio experiments for ‘Ready for the High’.

“Murph was playing on this little 80s synth he’s got,” Dan recalls. “It was a sort of shitty midi trumpet sound. We were like, ‘that’s so cool! We’ve got to do that with real trumpets!’ It put that thought in our minds when we were writing in LA [so that] another song would come along and even in the fact that the word ‘brass’ was floating around… it’s like, oh, that could be cool. Across an album, it’s nice to have similar colours coming back here and there. It makes it feel more coherent.”

Rather than repeatedly drawing from a core group of influences, each Wombats album, and even each song, starts with a different spark, he continues. For ‘Wildfire’, it was the “jagged, dry” saxophones on David Byrne and St. Vincent’s 2012 collaborative effort ‘Love This Giant’. Elsewhere, hazy shimmers of David Bowie, Beck, and LCD Soundsystem came into the fold. Being more seasoned musicians than ever before, the band found the motivation to follow through on fresh ideas, tugging at threads leading in promising new directions.

A sign that things are working is “this very alive, spontaneous feeling”, describes Dan. “It happens before you’ve even thought about it. We ended up keeping loads of stuff from those early demos that just felt like they did what they needed to do. The chorus of ‘Ready for the High’ [uses an] OP-1, this cool little synth thing that you can mess around with [which] straight away sounds like air or something like that. Pushing yourself in different directions is fun, and this album feels fun to listen to. If you’re having fun in the studio, it usually translates to the listeners.”

“We’re not overthinking anything; we’re just trying to make things we haven’t made before,” Murph adds. “It doesn’t matter what instrument you grab. Just shove it in your face and blow.”

Closing off the album is ‘Fix Yourself, Then the World’, an almost interlude-like half-song whose crunchy guitar and pianos drift into comfortable obscurity, a soft landing after the rollercoaster eleven tracks before it. Noteworthy is its title, slightly different from the album’s, with the aim of ending on a positive note, “after all the self-help and malcontent,” Murph quips. “It feels like a nice round-off to the album. If you’re really down and you have no energy for the world, then how can you be of any value to your spouse or kids or neighbours? It gives a little angle to the title of the album that otherwise wouldn’t have been there.”

It was another one that came together organically using whatever instruments were lying around the studio, says Dan.

“[Sometimes] it’s more the situation of the room that leads the sounds. We’d had a little smoke, and we were noodling around having fun and zoning out. It’s so nice; you just lose all track of time.” At some point, someone suggested pressing record. “Then Murph started singing something on it, and we were like, are we really going to mess with this vibe? Are we going to dig into it and try to turn it into a full song with a verse and a chorus and all the rest of it? Because we could have done that, but it just felt like we’d captured something in that moment that almost says more than trying to write a song. Saying nah, let’s just leave it like it is.”

Taken from the February 2022 edition of Dork, out now. The Wombats’ album ‘Fix Yourself, Not The World’ is out now. Photography shot on location at Puttshack Bank, London.