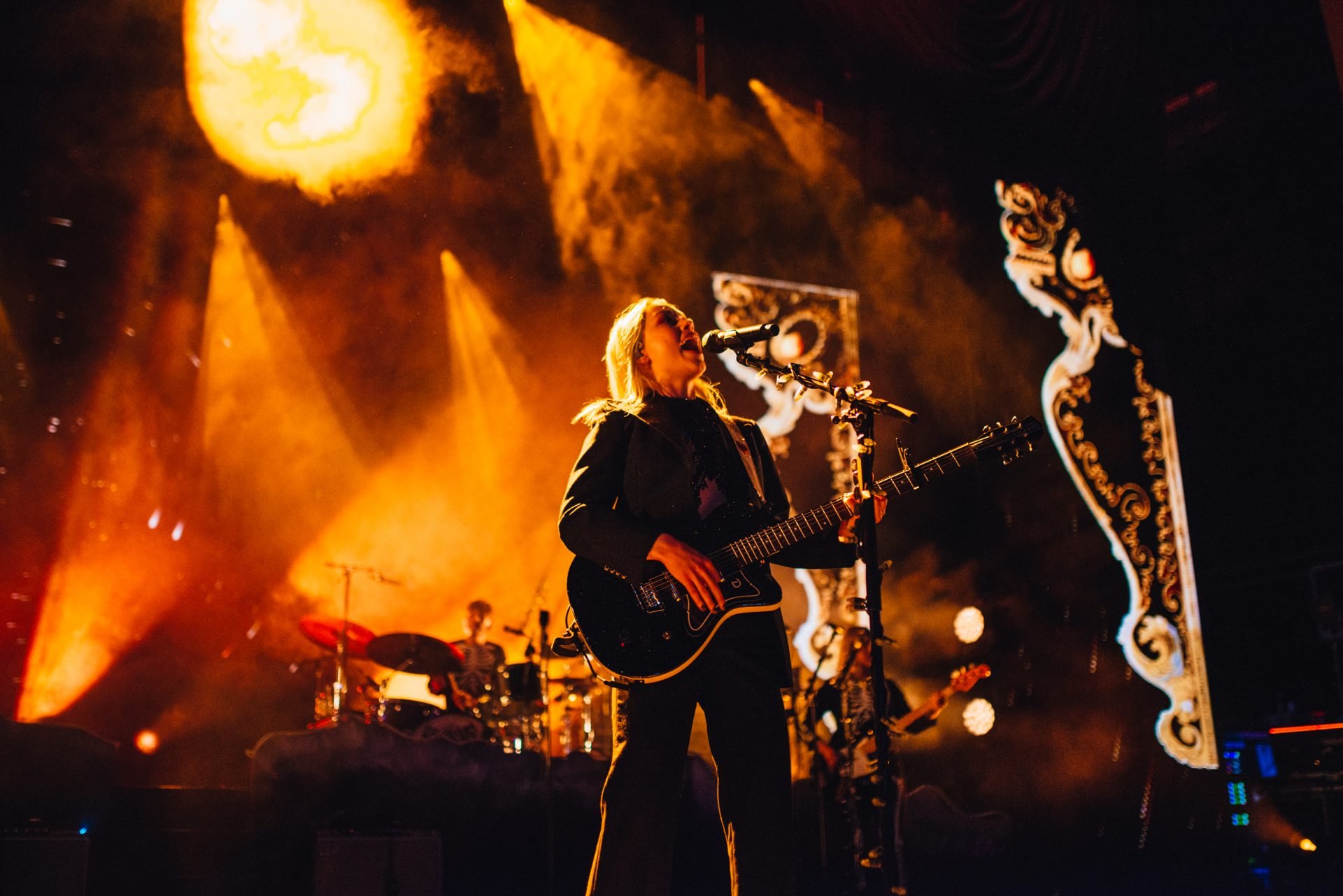 “Who was here last night?” Phoebe Bridgers asks Brixton. “Sorry it’s the same set, it’s all I know.” She’s on night three of four at the Academy, and she’s familiar enough with her fans to know they’ll be at every one.

‘Punisher’ took its time coming to UK shores, with Phoebe rising from indie darling to near-A-list status over the course of the pandemic, but crikey has it been worth the wait. This tour’s production value could easily outgrow the theatres she’s playing it to, as could the audience, who dutifully line up outside all day, if only to get a closer glimpse of Phoebe as strolls past the front row during ‘Scott Street’.

Early hit ‘Motion Sickness’ serves as a prelude before delving into some of ‘Punisher’s sadder cuts – ‘Garden Song’, ‘Halloween’ and the title track all arrive early on, each accompanied by a pop up picture book visual, pages turning after every track.

Much like Harry Styles’ stans scream “LEAVE AMERICA” a little louder than the other lines in ‘As It Was’, certain Phoebe lyrics get the same treatment. “Fuck the cops” in ‘Smoke Signals’, “I hate your mom” in ‘ICU’, “a room full of people” in ‘Sidelines’. Phoebe’s voice is wonderfully delicate but when amplified by the thousands of young people screaming back at her, it brings home how much these songs mean to them.

At this point in the tour, her fans (or Pharbs) have come to expect a guest or two, Phoebe having recently recruited Matty Healy at Brixton night two, and Rina Sawayama and Maggie Rogers at Latitude for ‘I Know The End’ screaming duties. Tonight support act and Saddest Factory signee Charlie Hickey joins her on stage for ‘Chinese Satellite’, and Nell Mescal (yes that’s Paul’s sister) comes up for an unlikely encore of ‘Georgia’.

Towards the end of her set, she plays recent single ‘Sidelines’, and just as the room starts wiping their tears, she asks, “Who. Here. Is. Gay.” to which half of the room screams, and she dives straight back into ‘Graceland Too’. Nothing quite encapsulates Phoebe’s entire brand like a quip about her LGBT audience uttered between two tearjerkers.

By the time ‘This Is The End’ rolls around, Phoebe’s made a convincing argument that she’s the best rock star in the world today – she walks on stage to her name up in flames while Disturbed’s ‘Down With The Sickness’ plays – but seals the deal on ‘Punisher’s enormous final track, its already iconic screaming outro followed by slinging her guitar off the stage and jumping into the crowd.

One of the best things about Phoebe Bridgers is that she’s consistently unpredictable. It’s rare that a folksy, emotional, horn and string backed album warrants head banging and crowd surfing but Phoebe just makes it work. From the wink and the nudge of the metal band logo shirts and the ‘Reunion Tour’ title, to the Swiftie-like dedication of her fanbase, she makes for an unlikely superstar, but that doesn’t mean she’ll be any less of one.